This year Haaga-Helia’s journalism seminar covered three subjects; from a hobby to a profession, social television and Docventures, and from audience to a community.

First part:
From a hobby to a profession

Overall the first part was rather disjointed. Even though the theme “from a hobby to a profession” continued throughout the lectures, I was left unanswered on the latter two presentations, which seemed to be held to get new listeners and readers for the presenters.

But then again, Long Play’s presentation by Riku Siivonen was extremely interesting. Long Play started its existence by consisting of somewhat voluntary work. The start was slow, and whilst there were plenty of intentions to publish stories, many of them were delayed as the team sought perfection. If it could’ve been improved, it should’ve been. Then success came, step by step at start, from the LP 02 of Himanen, and on November of 2013 a grant of 250,000 euros from the Uutisraivaaja-prize.

Siivonen thought that Finland might be too small. And honestly, I’ll have to completely agree with him. When dealing with even somewhat sub-cultural creations, the Finns won’t fit the quota required to be profitable. That’s one of the main reasons why I’m aiming Photour.net to English-speaking readers.
—

It was rather interesting to hear from Paula Salovaara about Radio Helsinki’s active community and whatnot, but I was still left with a feeling of watching through 15 minutes of advertising blended in a documentary, just like those product-based “how it’s made” shows on television.

Emmi-Liia Sjöholm’s experiences about blogging to her “Torkkuja and nokkosia” (Naps and nettles) wellbeing and food blog didn’t open the experience itself as a whole, but gave us only a few peeks of what being a semi-professional blogger is like. I didn’t quite catch from the presentation exactly how you are supposed to get your blog populated in the first place, apart from just posting daily. Besides, Photour.net gathers 50 % more views than Sjöholm’s Torkkujajanokkosia.com does and I’m not giving speeches about my experiences.

Although, to be fair, my presentation would probably be plain awful and have even less content. “Hey, I take pics of girls wearing latex.” Yeah. No. I must applaud Sjöholm for telling us what she told – to me it’s not worth much, but to many aspiring bloggers it most surely was.

Second part:
Social television – the television of the future: Making of Docventures 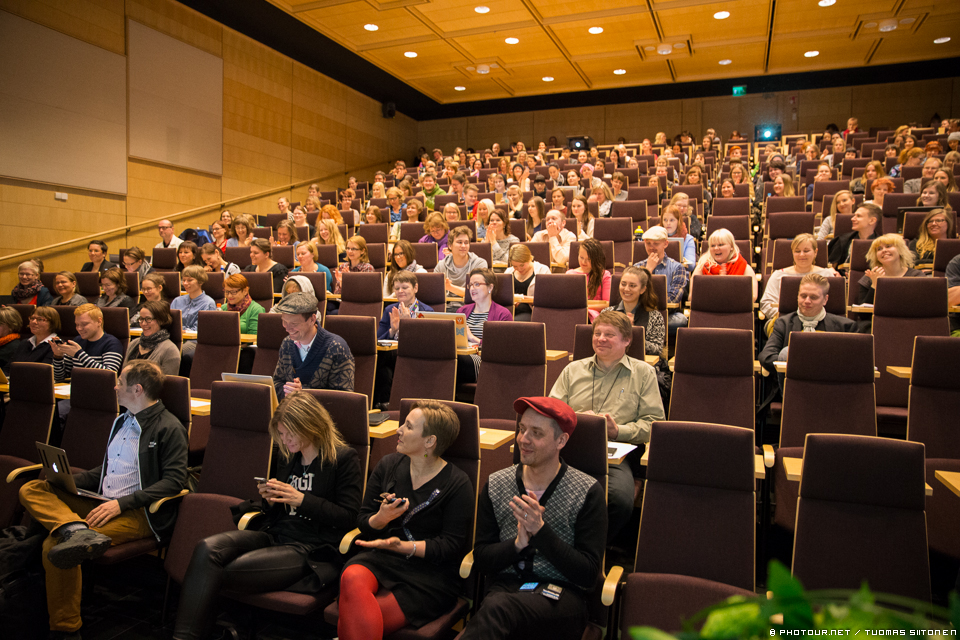 Riku Rantala (better known from the travel series Madventures) and Elise Pietarila offered us a presentation about Docventures, an interactive interpretation and a presentation of a document, which relies heavily on the participation of the program’s viewers through social media.

Apparently the idea of Docventures was sprung into Rantala’s mind when he found himself googling the facts of the documentary he was watching and stopped to think what he was actually doing, what the documentary did not provide for him.

The presentation went into a great detail of how the social masses gathered among the fresh idea of presenting old documents and simultaneously contributed to the program’s content. This all can be summarised into what Pietarila said: “Once you’ve reached the audience in social media, you’ve got to involve them.”

Could social media save the modern television journalism?

The panel had five participants in total. Besides Riku Rantala of Docventures and Riku Siivonen of Long Play, there were three new faces: Katja Lahti, blogger, Miina Lange, editor-in-chief of the Finnish Cosmopolitan and Paula Salovaara, entrepreneur-journalist.

The discussion’s topic circled around the communities of internet, a topic which I would consider myself somewhat proficient in. I’ve administered plenty of those, including Ylilauta, Northpole, Naamapalmu and other smaller communities. The largest one I’ve administered in was Ylilauta, with 2,4 million monthly visitors (statistic from March 2014) – one of the largest in Finland.

But the topic was from journalism’s viewpoint; what can communities offer and how can they help, how much will the communities partake in the journalistic end result?

Lange told about the Finnish Cosmopolitan’s website, which has a section named MyCosmo that relies heavily on the user-created content. The content creators partake in creating the articles, and those who create popular and frequent content receive a monthly salary based on the views. To which I can give my utmost appreciation.

Hell, if I could afford to pay people to write/photograph for Photour, I’d do that. But as my budget is rather low, I’ve decided not to even ask for freebies from my colleagues – a proper journalist deserves a proper pay.

Many points were made, but the most interesting one was a question from the audience: ”Are communities needed because the actual product around it is not interesting enough?” And that’s a completely valid question, which didn’t receive a properly refined argument. Do modern medias require crowdsourcing and guest-created content to gather large masses, is it a necessity?

With that, I shall leave a quote from Riku Rantala: “Ylilauta is art.” 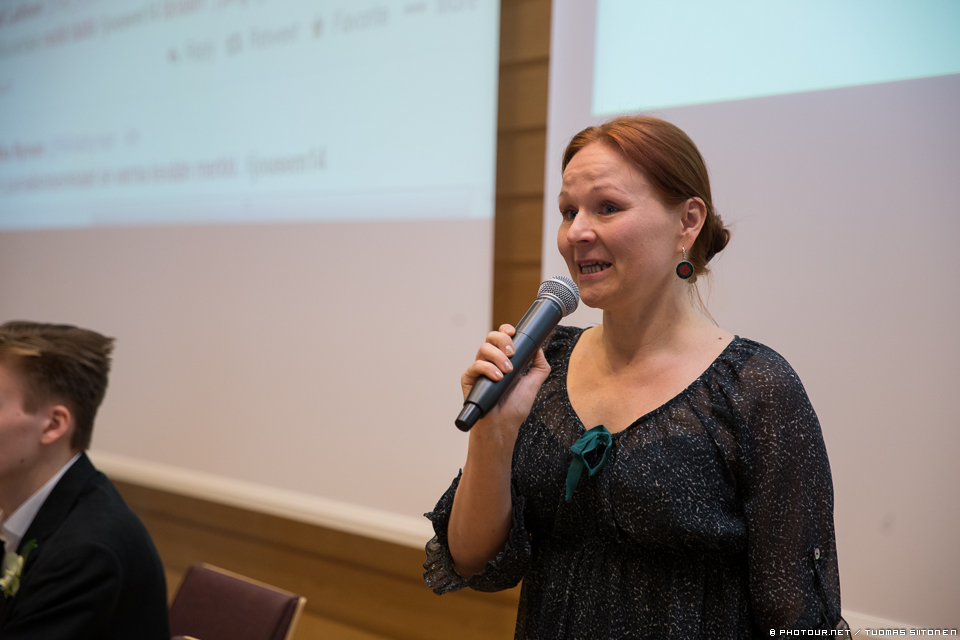 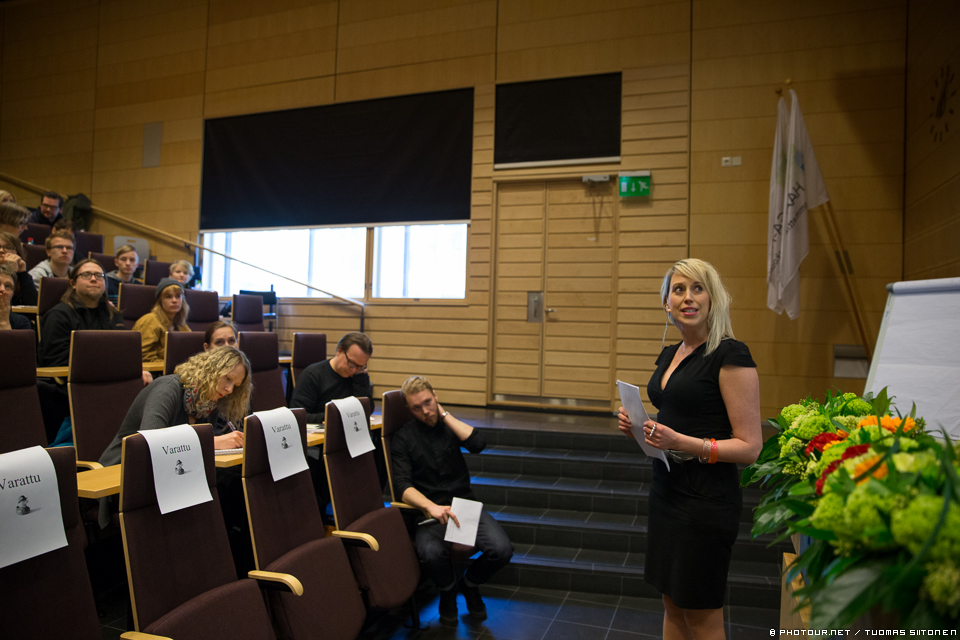 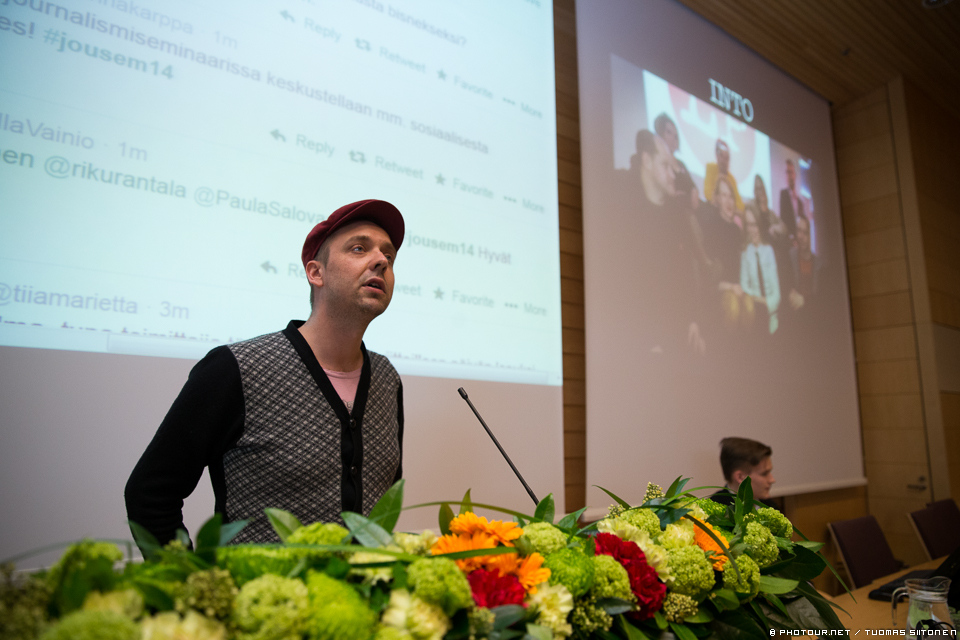 The president of Long Play, Riku Siivonen, lecturing about Long Play, its story and the struggles of slow journalism. For those who don’t know, Long Play is a company that aims to direct slow journalism to fight the click-hunting journalism, which seems to be the latest trend. 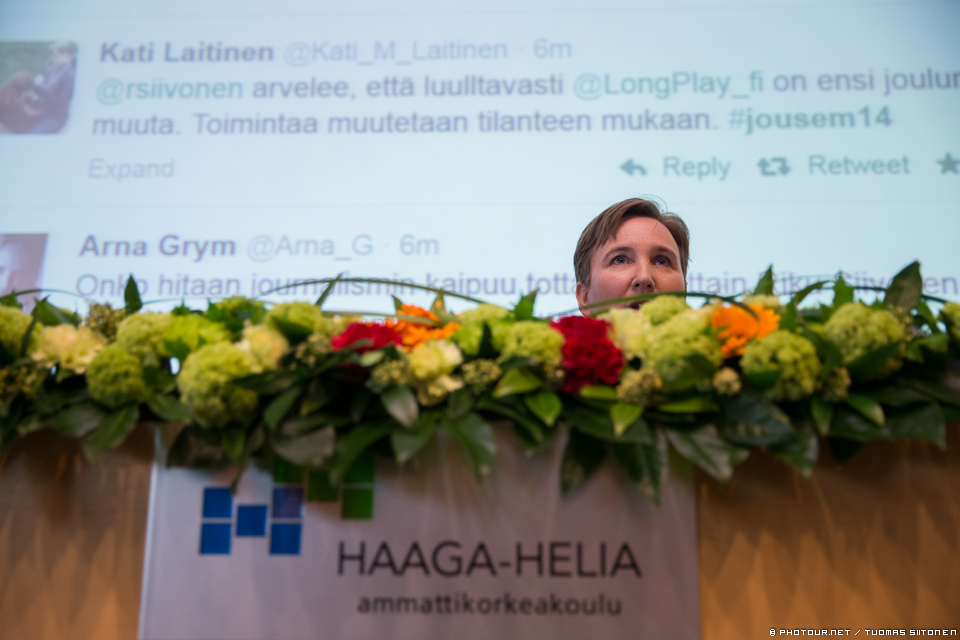 Paula Salovaara of Radio Helsinki was rather perplexed by the comparably tall speaker’s booth and how she’ll be all flowers in the photos. 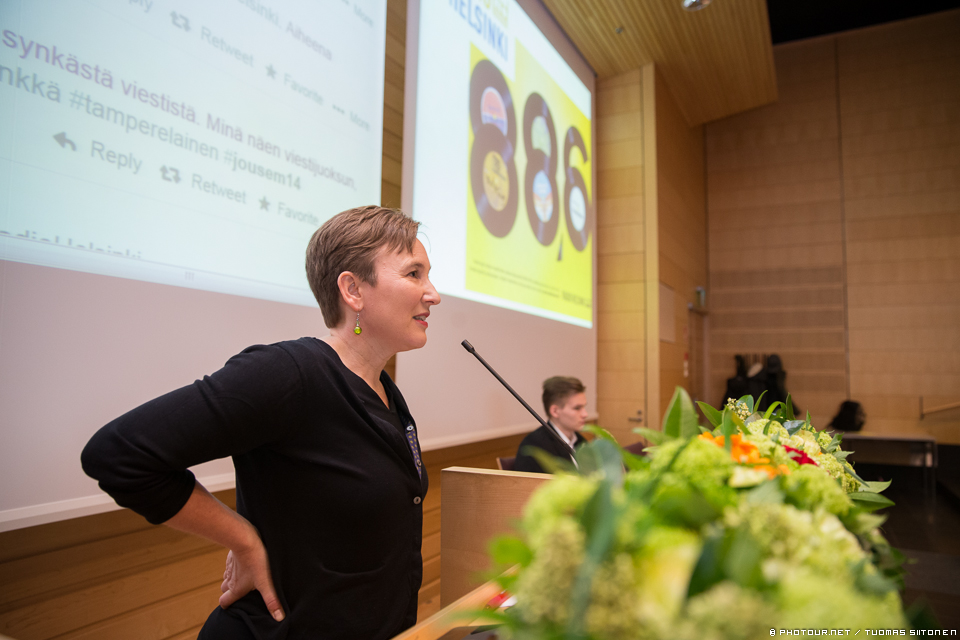 All silliness aside, Salovaara told us about her experiences with Radio Helsinki, an urban radio with a thick and a partaking community. “Community comes from a feeling, not from social media consults,” she said when she referred to Radio Helsinki’s discussion boards. 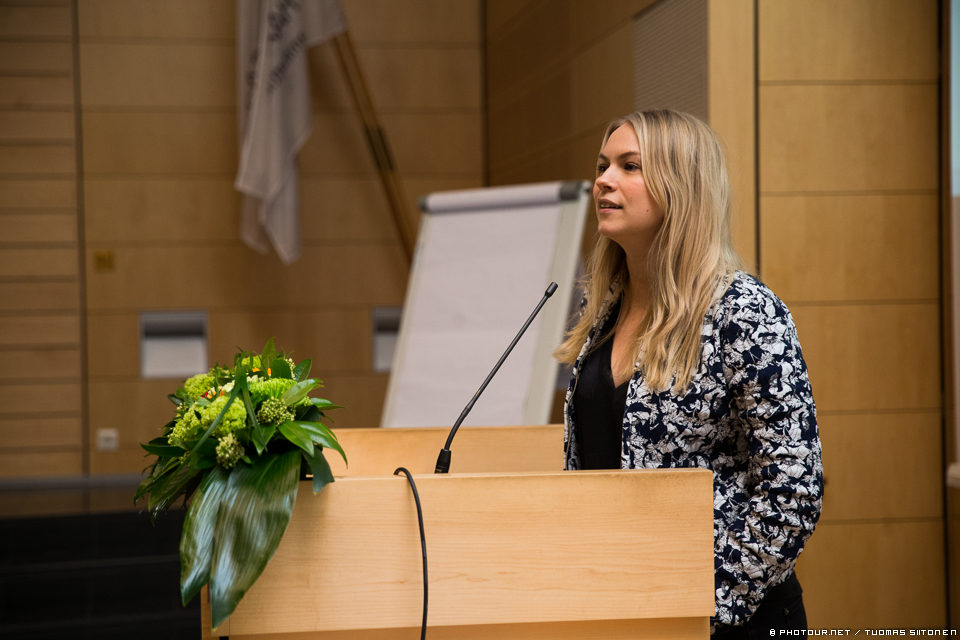 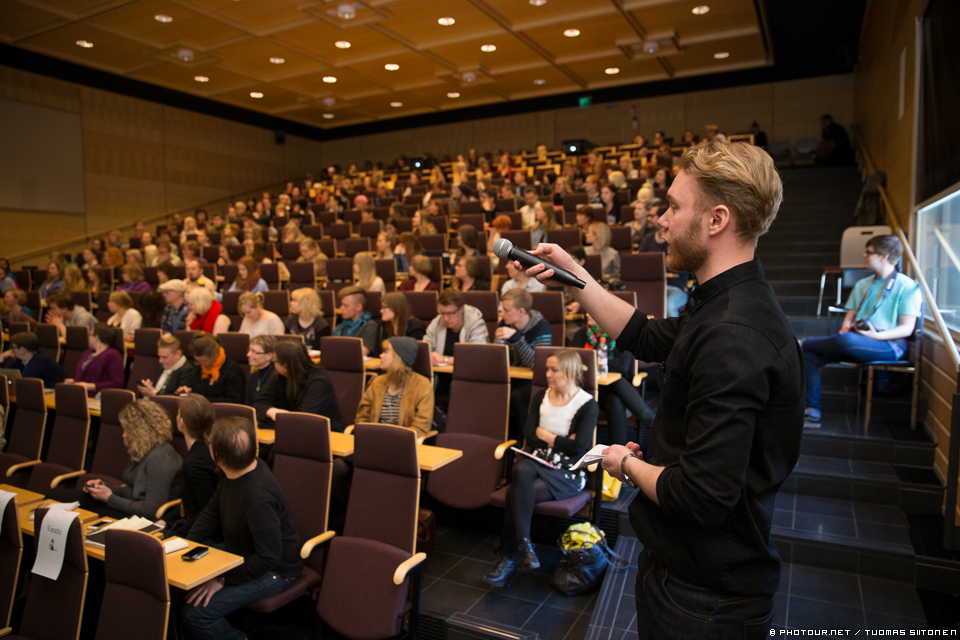 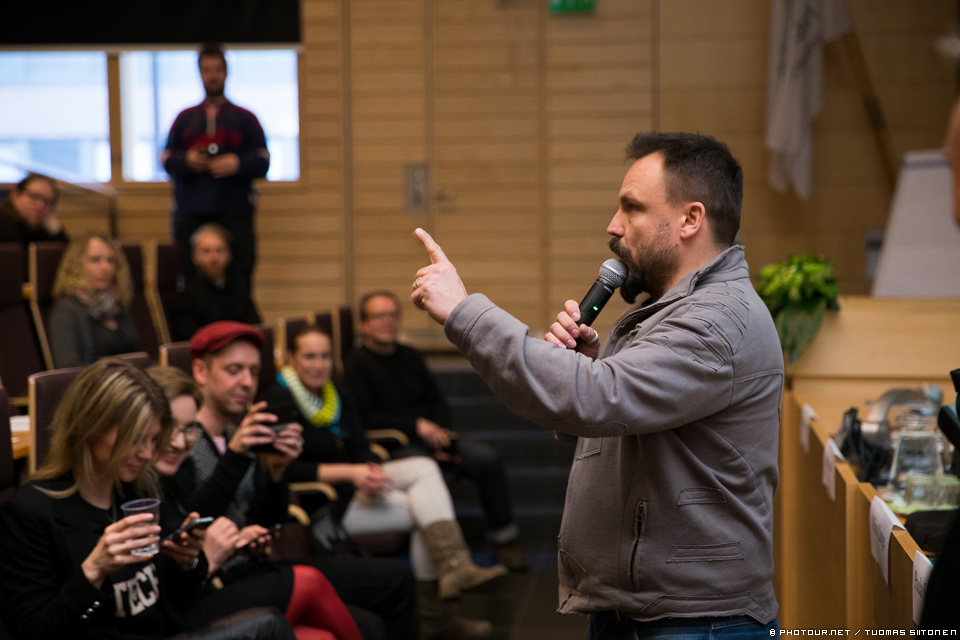 Riku Rantala talking about the interaction between the active and important community of Docventures. 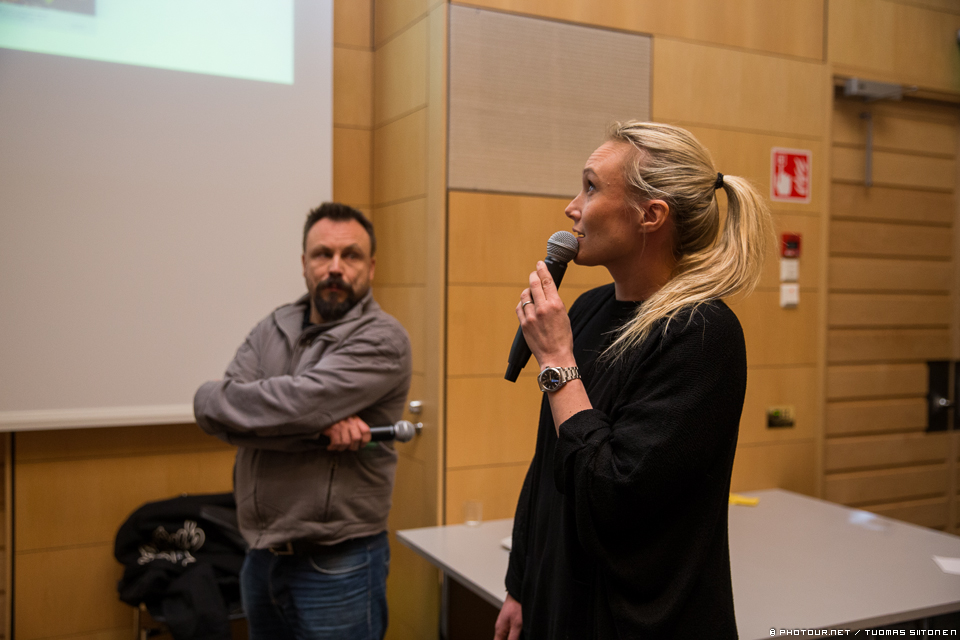 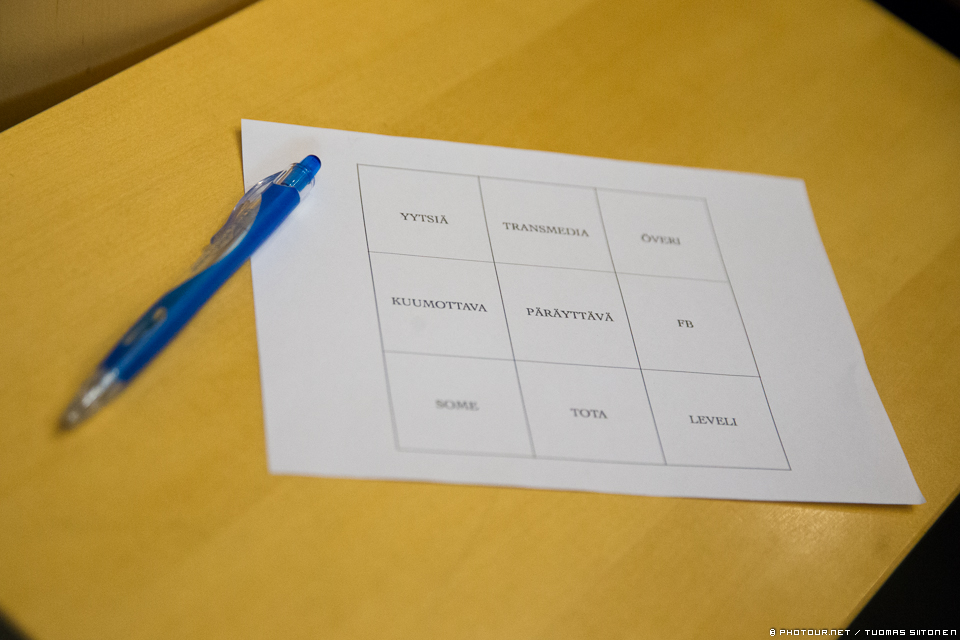 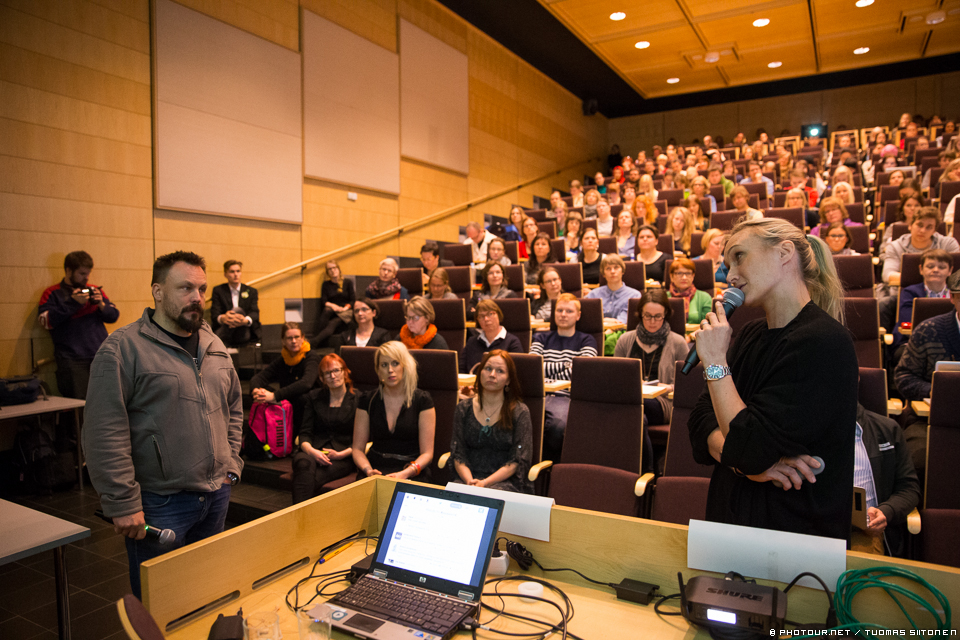 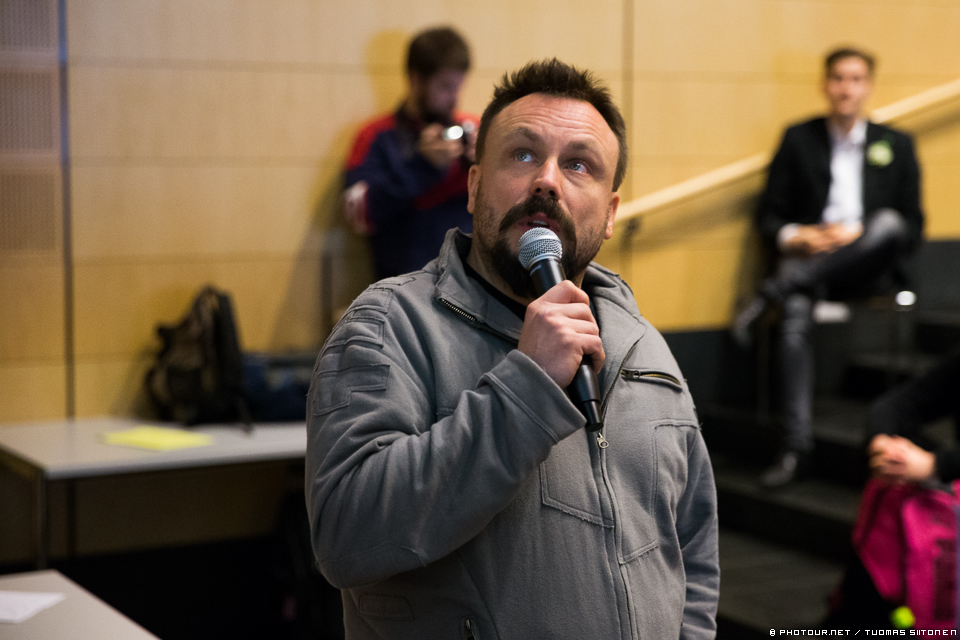 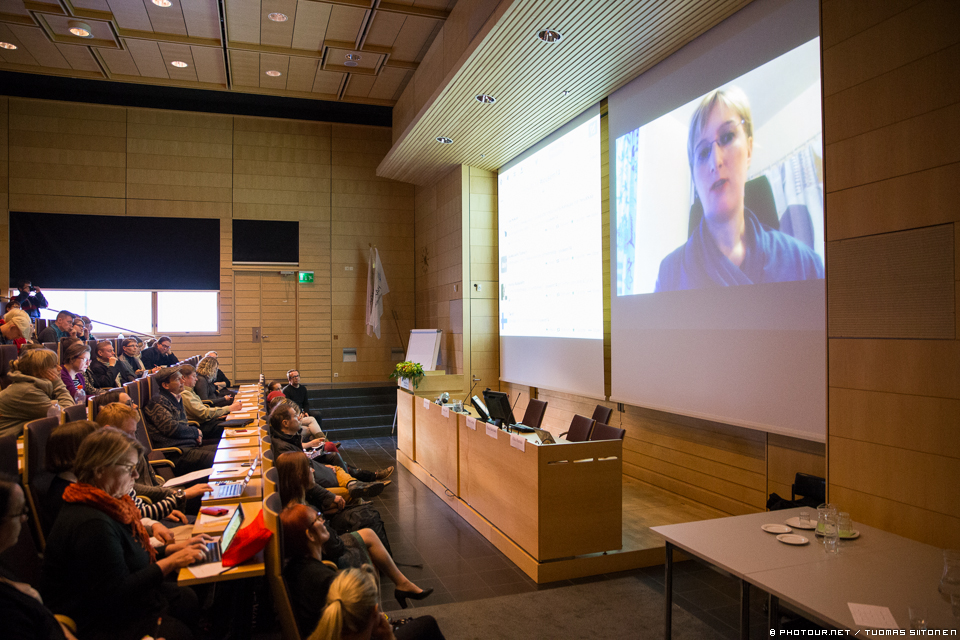 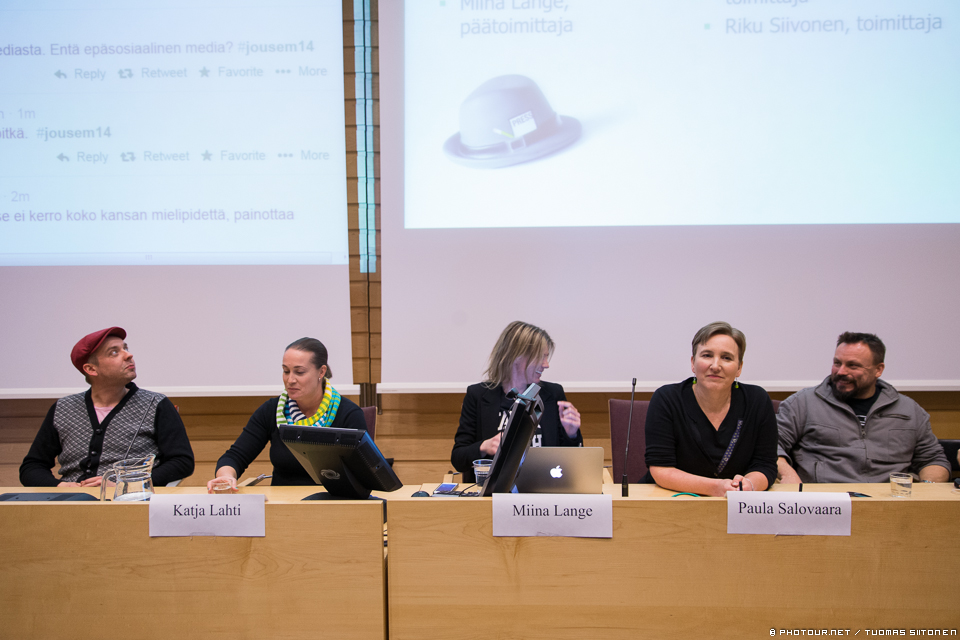 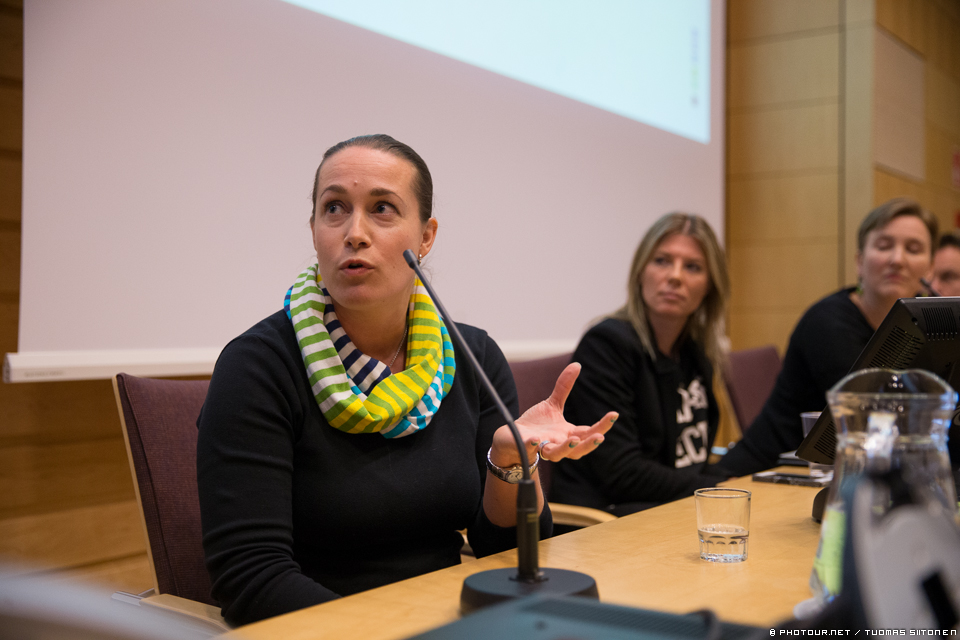 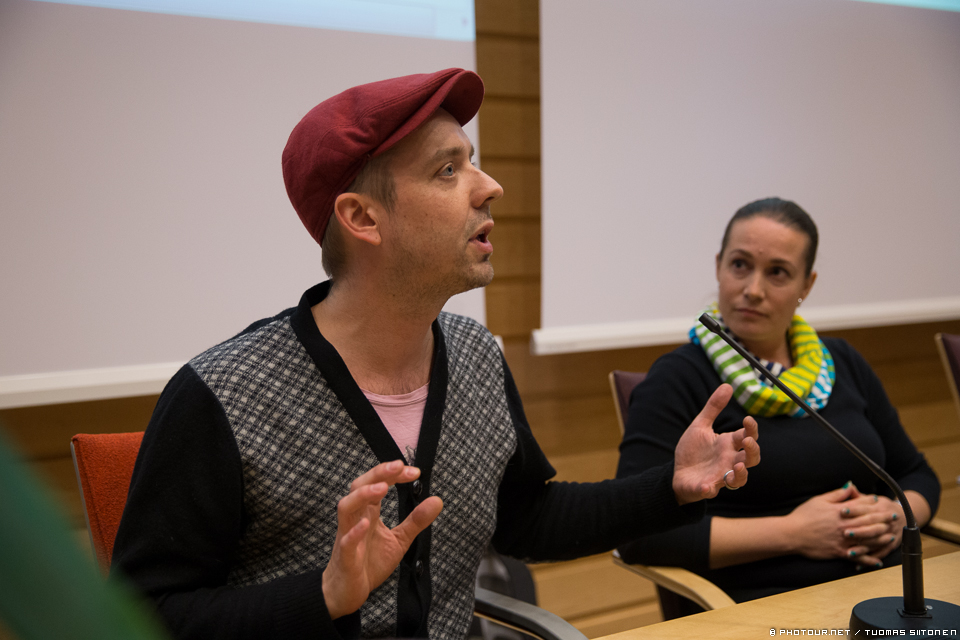 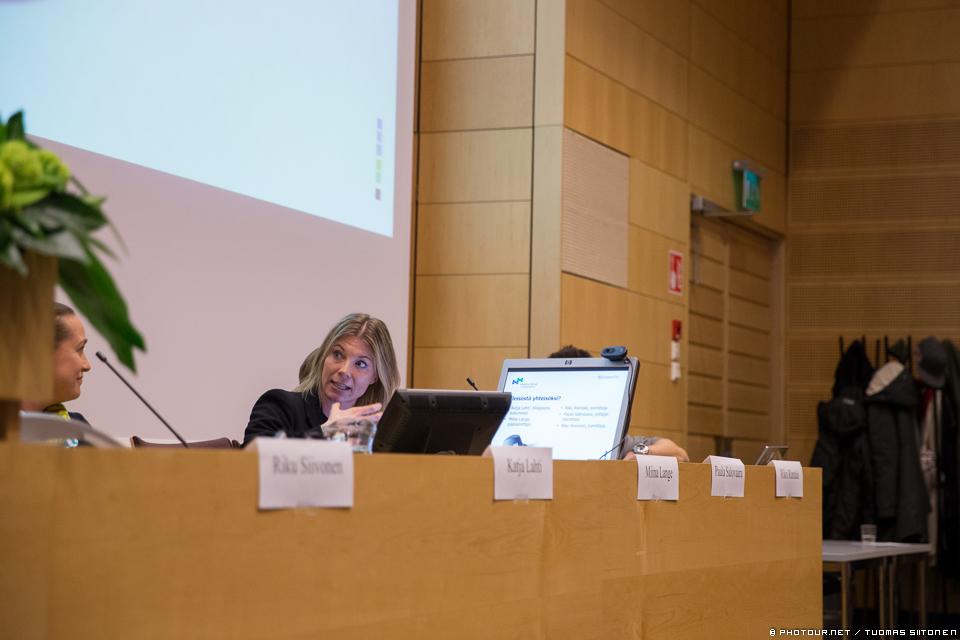 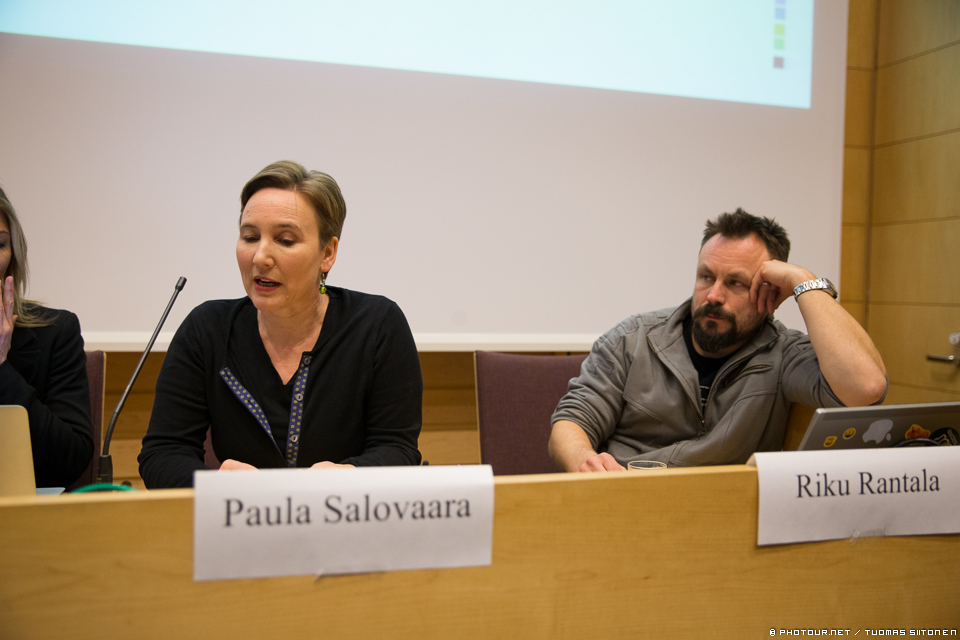 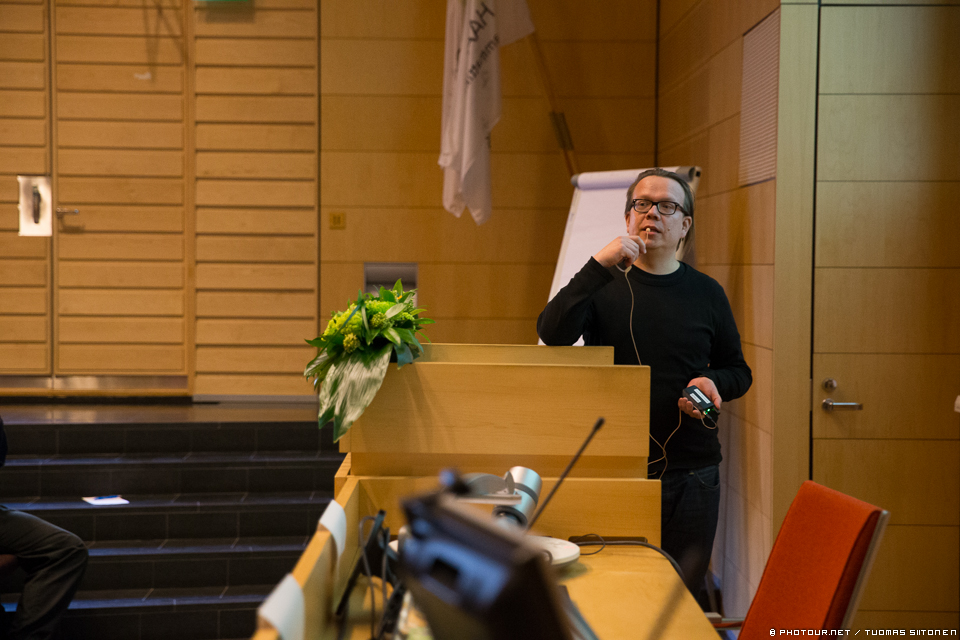 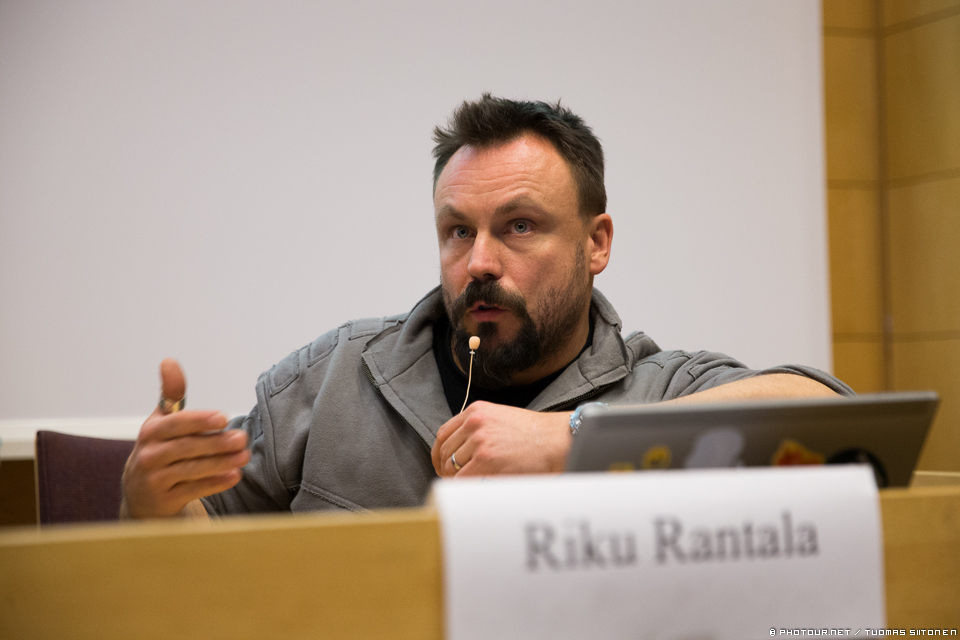