Originally I had no plans for the Finnish Independence Day. First I thought to myself that I’d just lie on the sofa whilst watching the president’s reception. That’d be a nice way to numb the brain cells after a long week of work. But then something struck me. “Screw that, that’s boring”, I said to myself and filled my thermos jug with coffee, packed up my photography gear and went for a little roadtrip to shoot nature.

After driving for ten minutes, it started to sleet. No nature photography for me around here, I thought to myself, so I navigated my van towards Helsinki and its shorelines. Eventually I found out that I ended up nearby of Kauppatori, where the police was already gathering.

“What the hell,” I thought to myself, “I’ll just sit here and see what’s going on”. So I parked my van, opened up the tailgate, grabbed my 1D X with 70-200mm f/2.8 and 2x extender, sat down in the van’s trunk and poured myself some coffee. Watching Helsinki rushing by when I had all the time I wanted was extremely satisfying. The open tailgate of the van covered me from the icy rain.

Suddenly many hours had passed – and I just sat there, observing the rainy Helsinki. I drove my van behind the police perimeters and dismounted to the streets watching the Independence Day parade.

After a while, the riot police geared up and filled up the perimeter. Quickly some flashing blue lights appeared on the horizon, followed by chanting and drumming. The annual Independence Day protest was here. Last year they caused quite hefty property damages when the president’s reception was held in Tampere. Everybody expected the protestors to arrive at the Kauppatori, where the perimeter was set up. So did I, and decided to wait, as I had a wonderful position next to the police lines.

Even though it’s somewhat disappointing not to be allowed nearby even as a member of the press, I can see the reasoning of this practice, as the encirclement was starting to get surrounded with hobbyist photographers, some of whom carried provocative placards. These hobbyists used no common sense in positioning themselves. No police wants to have anybody straight up behind him, as that’s an awful risk to the police – that’s just common sense. And if something was to be thrown over the line of the riot police, the person behind the lines could easily been hit unconscious, thus requiring some of the police’s resources to be utilized in recovering the fallen hobbyist.

Now this is all obvious to me; I’m merely writing this in the hopes that an unaware person reads this and understands that a stray person right behind the riot police is a great risk and is swelling the cumulative frustration of the police – and impeding the workflow of the working press.

Sure, it’s part of everybody’s freedom of speech in Finland to photograph on a public setting, but to set others in danger for your negligence – that’s just plain stupid.

For the sake of honesty, some of the police officers’ directions were not so logical and contradictory to other officers’ advices. But again, I’ll have to understand this – there were hundreds of officers around, and basically those whose advice was not up to par were the ones, who were dispatched at the place later and whom weren’t in direct contact with the field command. Those who knew most about the situation, were friendly and helpful.

The Finnish winter, right before snow has fallen, is at its ultimate darkness. The orange-glowing, dim street lights aren’t lighting up the place by much. This is why I almost constantly held on to my 50mm f/1.2L. Whilst watching other people work, many of them went for the “safe” way of using a regular zoom with a flash or a telezoom with a monopod.

I’ve used the 50/1.2 so much that I’ve really grown to adapt to its extremely narrow area of focus. Thus using it is not so much of a risk to miss the important moment that lasts for a fraction of a second. It’s a risk nevertheless, though, and I can perfectly understand the reasoning of using a more certain way to shoot.

Most of the photos are black and white because the colour temperatures are so mixed up due to different types of lights and cause the images to be extremely restless. 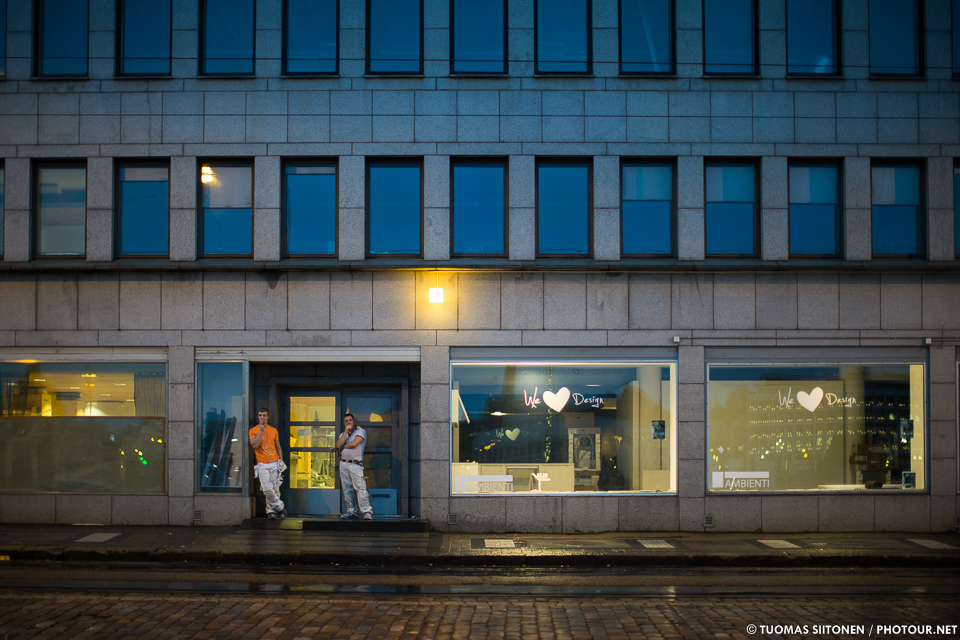 Before the protests were even near, two decorators were on a cigarette break on Eteläranta. 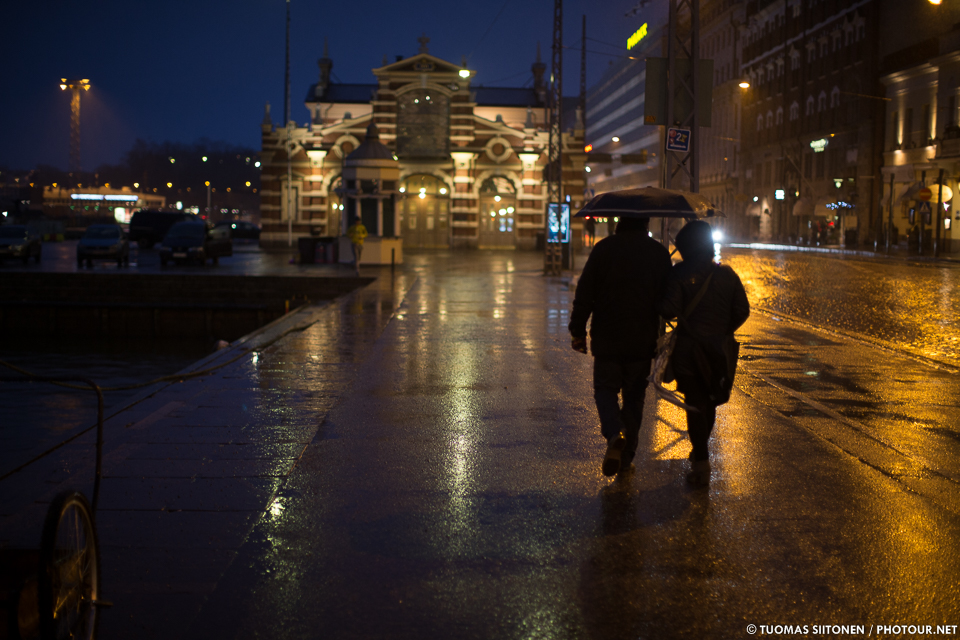 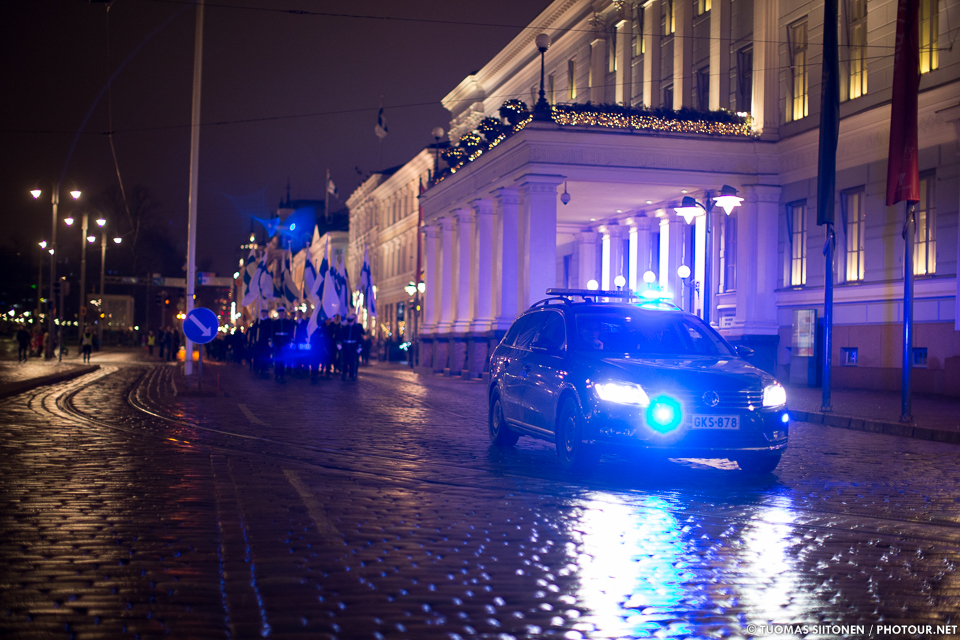 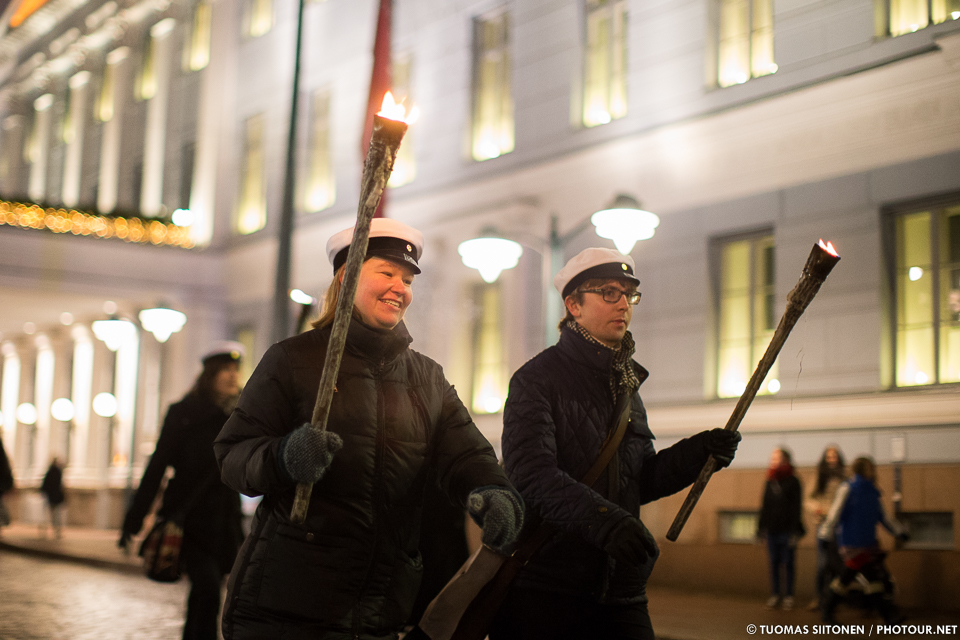 Independence day parade – the peaceful and respected one. 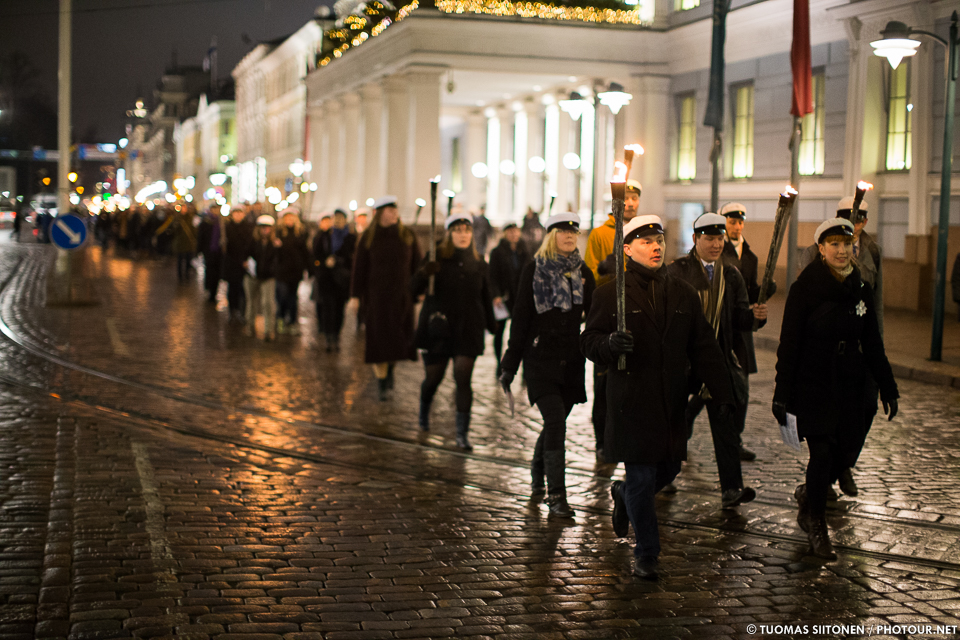 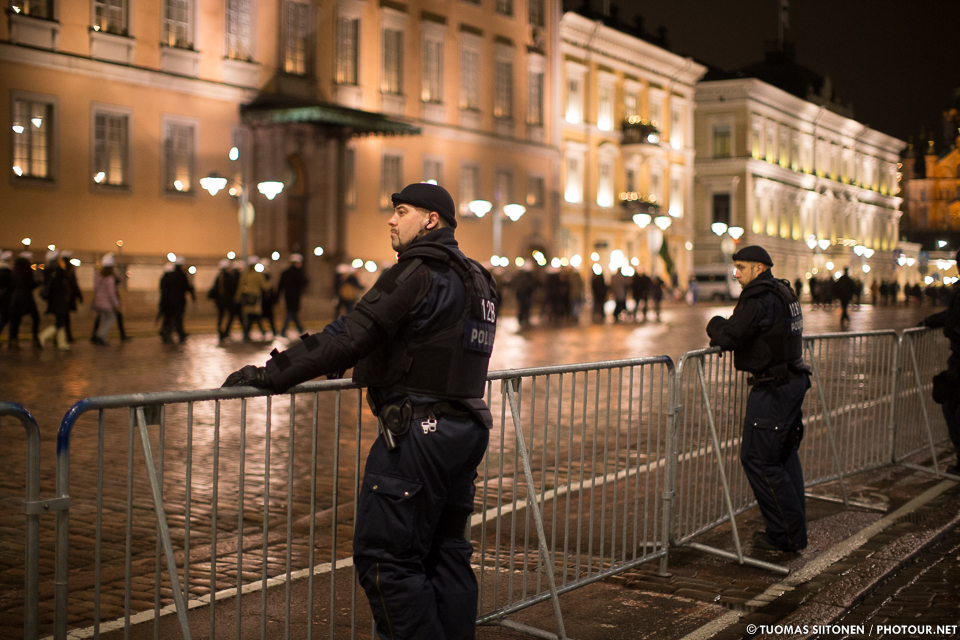 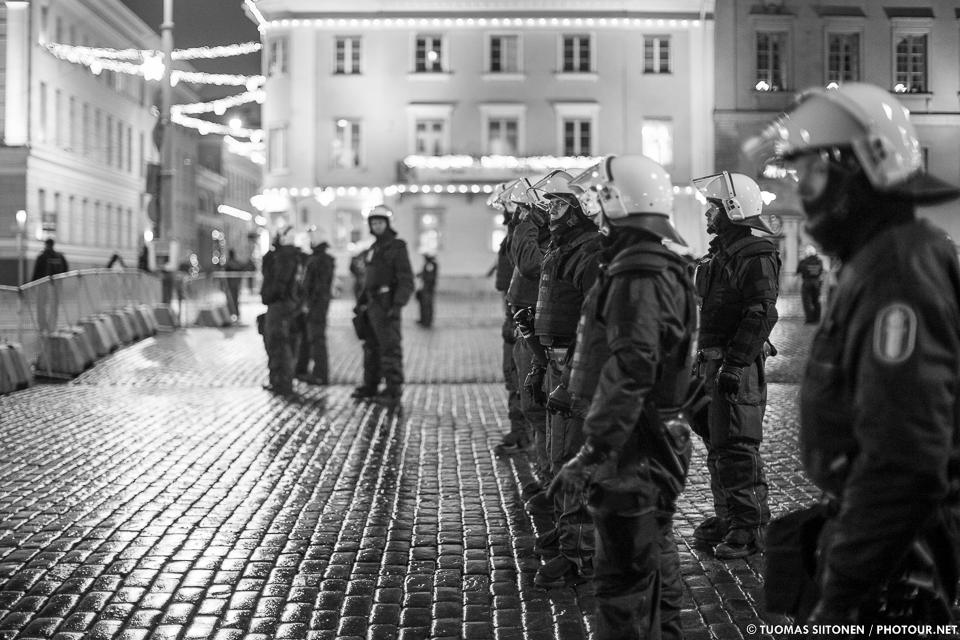 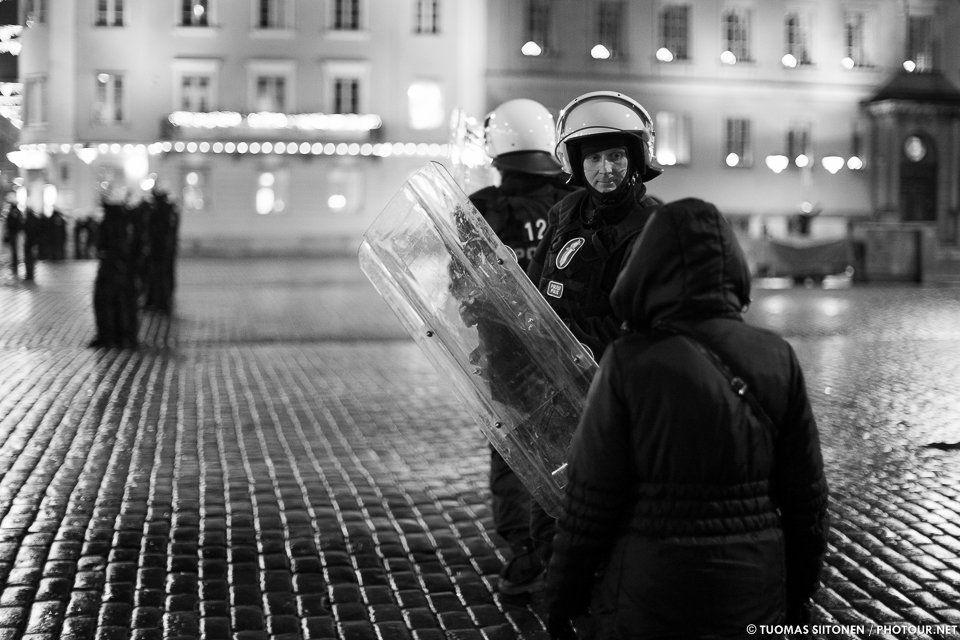 A riot police officer advising an old lady of the situation. 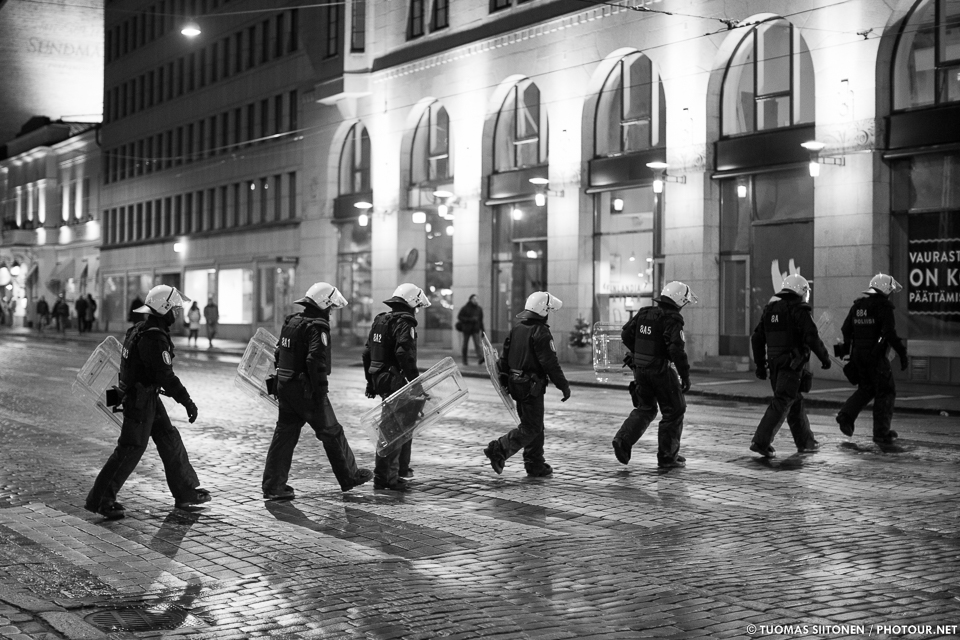 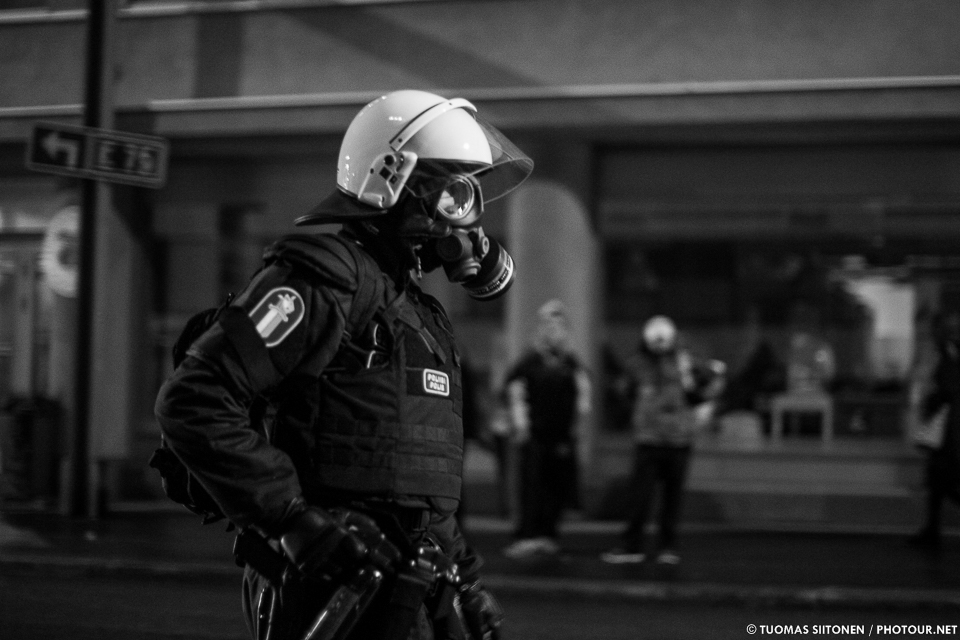 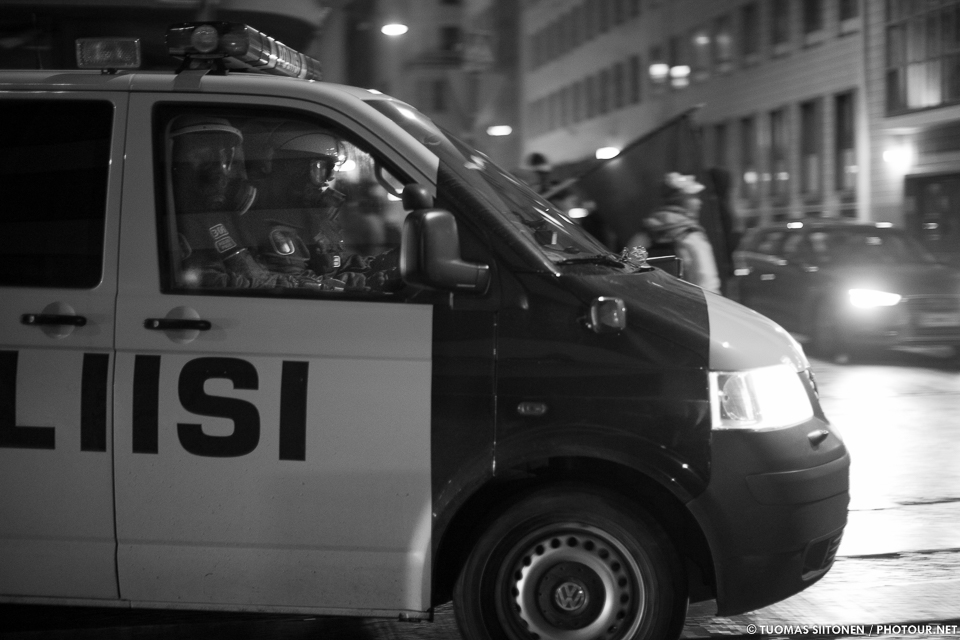 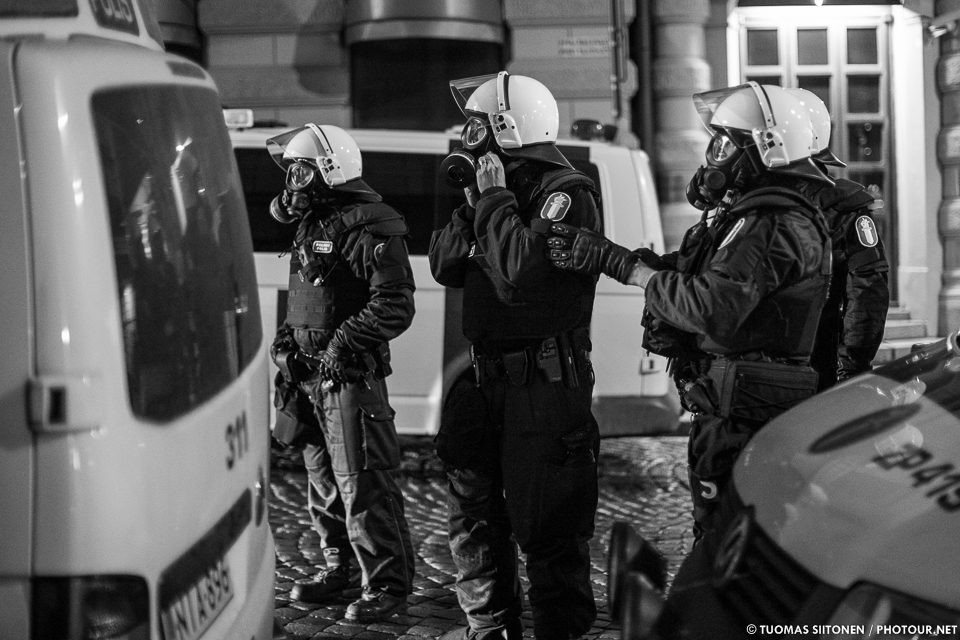 Gearing up, preparing for the possibility of OC. 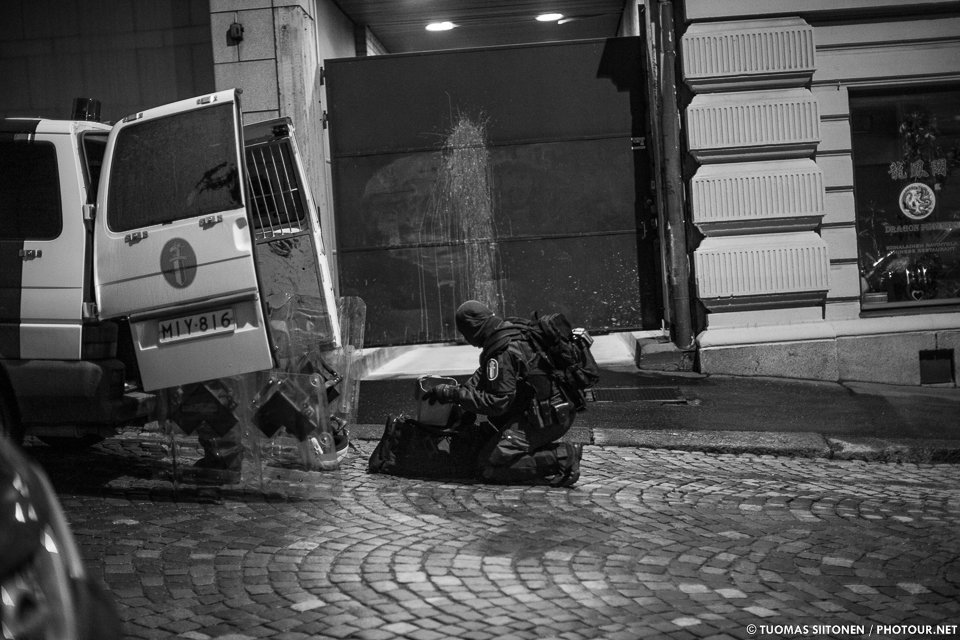 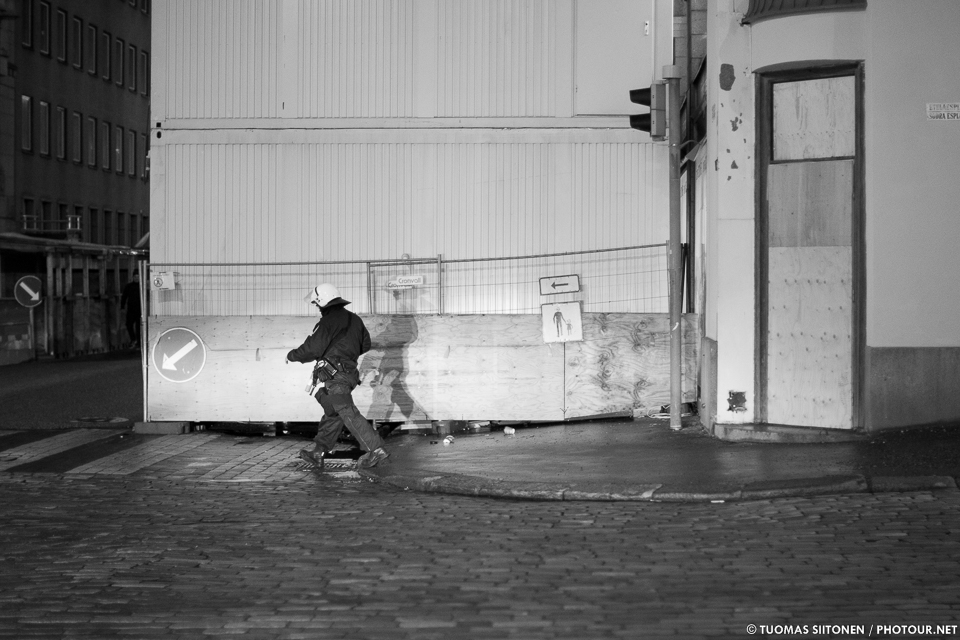 A riot police carrying an FN 303, less-lethal riot gun. In 2004 in Boston, an FN 303 round killed Victoria Snelgrove, a journalist student, as the accuracy of the gun decreases significantly after a certain amount of shots. 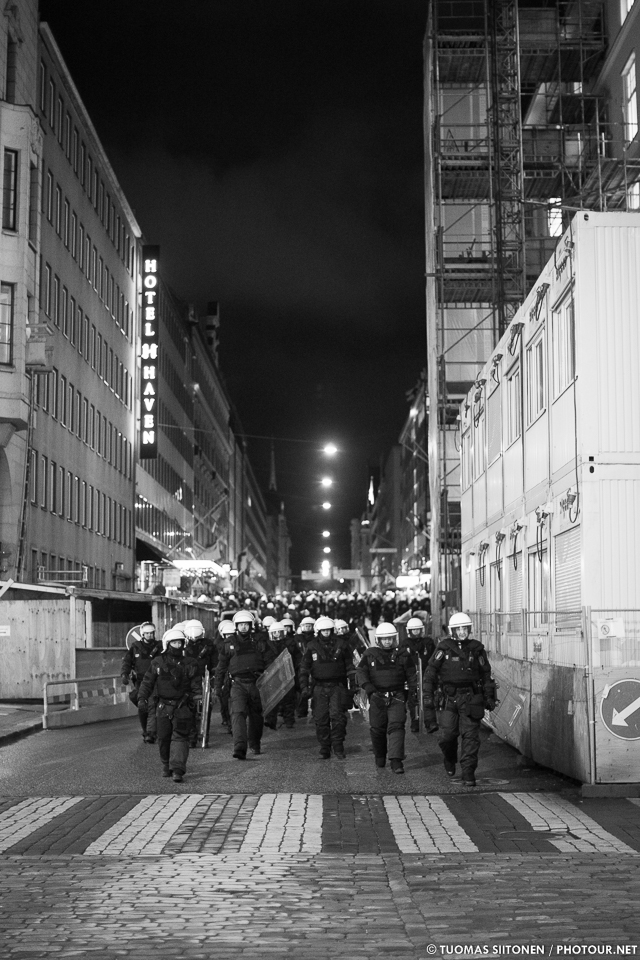 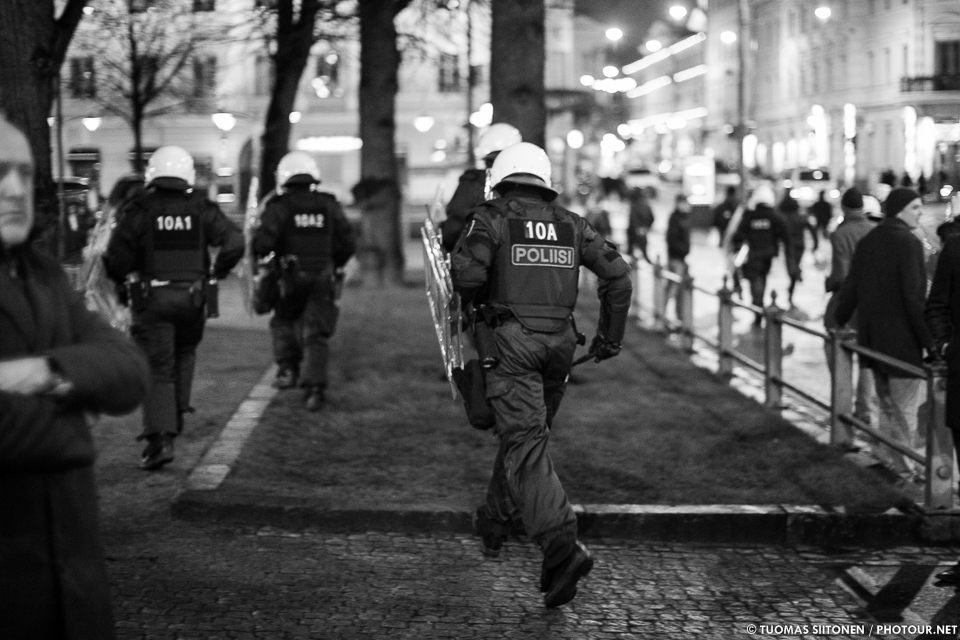 The risk of more protestors was too great, thus the riot police moved their lines in the middle of Esplanadi’s park. 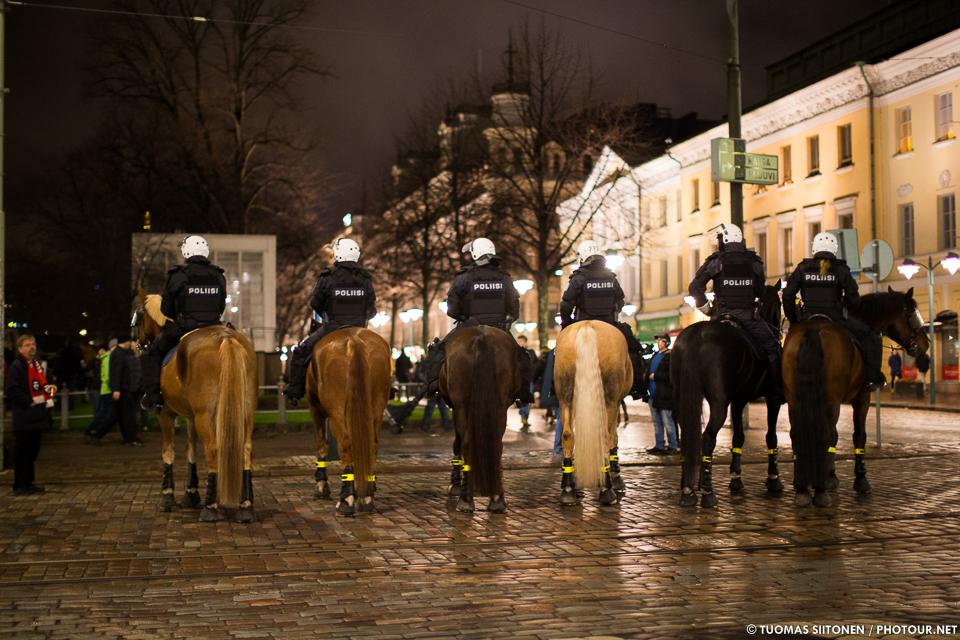 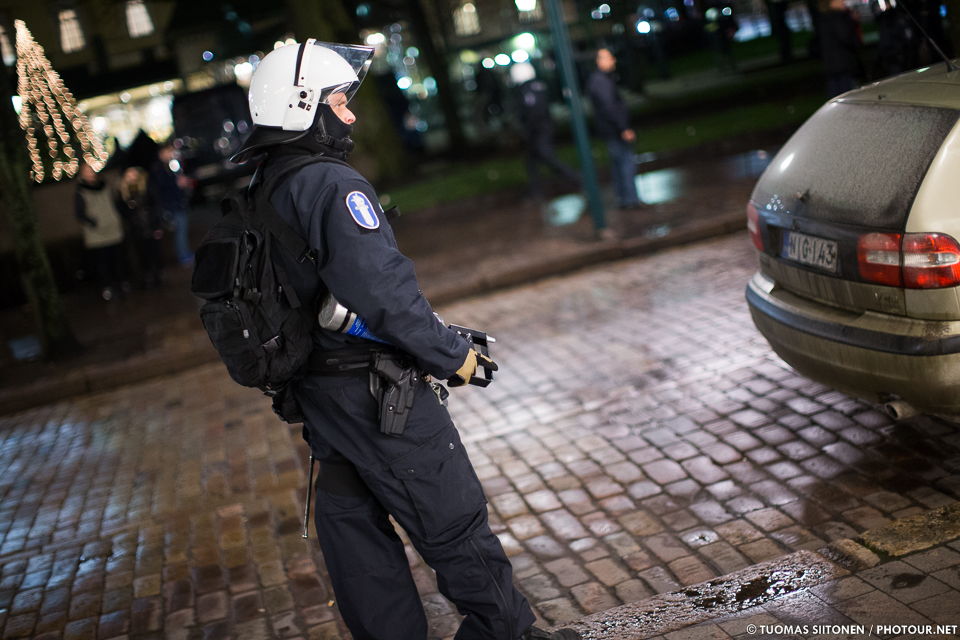