Finns have the strange habit of stuffing themselves into a boat, getting wasted and then acquiring more alcohol from Tallinn, Estonia, which is sometimes referred as Southern Helsinki due to its ease of access.

This ferry traffic is common due to silly Finnish alcohol legislation and heavy taxes, thus it’s much cheaper to travel to Tallinn, buy dozens of litres of Finnish beer exported there, and travel back. It’s illogical, but this is directly caused by the legislation; some even suspect that the ferry companies have lobbied for it to lure in more Finns desperate for cheap alcohol.

But as there is no disputable proof and it’s the cheapest way to obtain alcohol, we decided to take Project L to a ferry to Estonia and back.

A ferry to Estonia is kind of an adults’ amusement park and its main attractions include alcohol, booze and spirits – not to mention brewed products containing ethanol. Everything is expensive but alcohol, and this directs the customers into purchasing plenty of it. We might have resulted into same behaviour. And we might have been too hungover to visit the mainland on the morning, as there’s only a four-hour timespan before the ferry leaves back to Finland.

I must say, going to the ship’s nightclub whilst wearing latex was quite an experience – a wonderful one, indeed. Nobody really recognized the material to be anyhow exotic nor did it matter.

The shiny material isn’t what we’re afraid of – it’s our own minds that deceive us into thinking that people actually care. If one’s wearing clothing in a tasteful way, it simply doesn’t matter what material it’s made of.

As usual, the behind the scenes and outtake photos will be published in a few days, with presumably quite a lot of video.

I would also like to point out, that the latex mini-skirt present in the pictures has been generously borrowed by Latex by Tiina Rikala. Please check out her site, she has some wonderful designs. 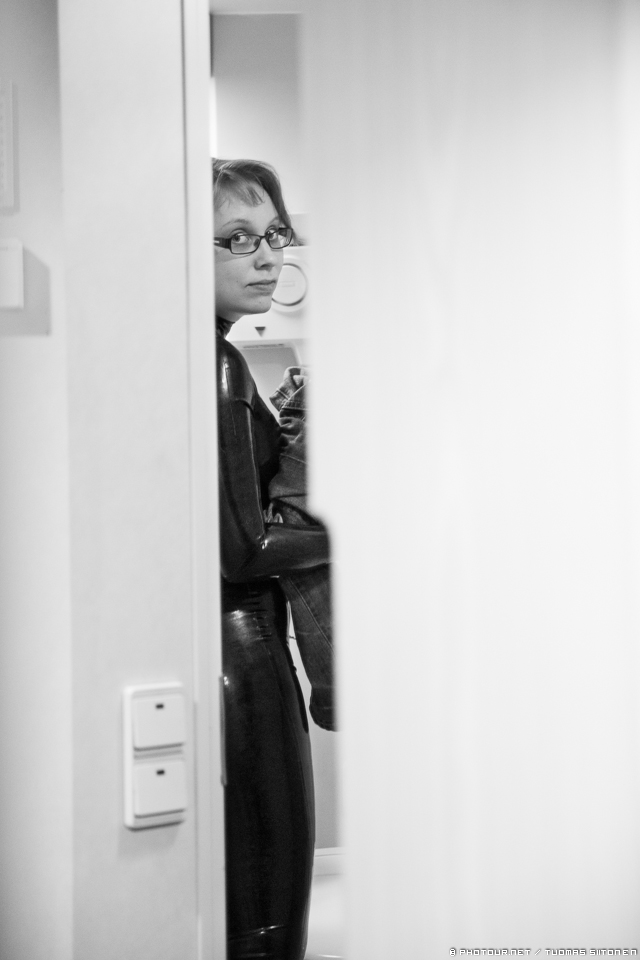 Miia peeks through the door via a reflected mirror. 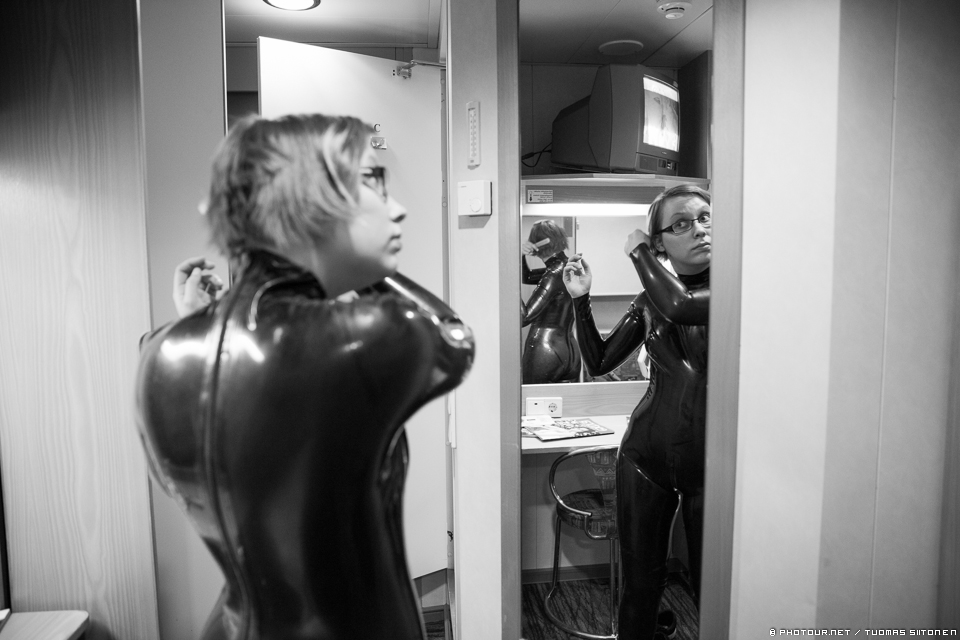 The mirrors of the cabin formed interesting reflections with plenty of views. 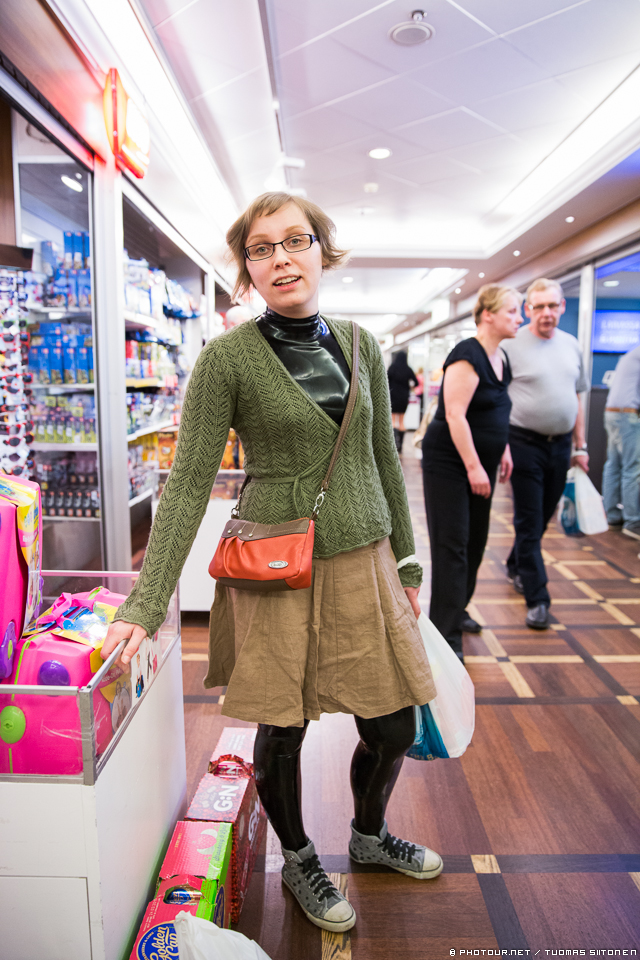 Tax-free shopping at its best: alcohol, alcohol and alcohol. 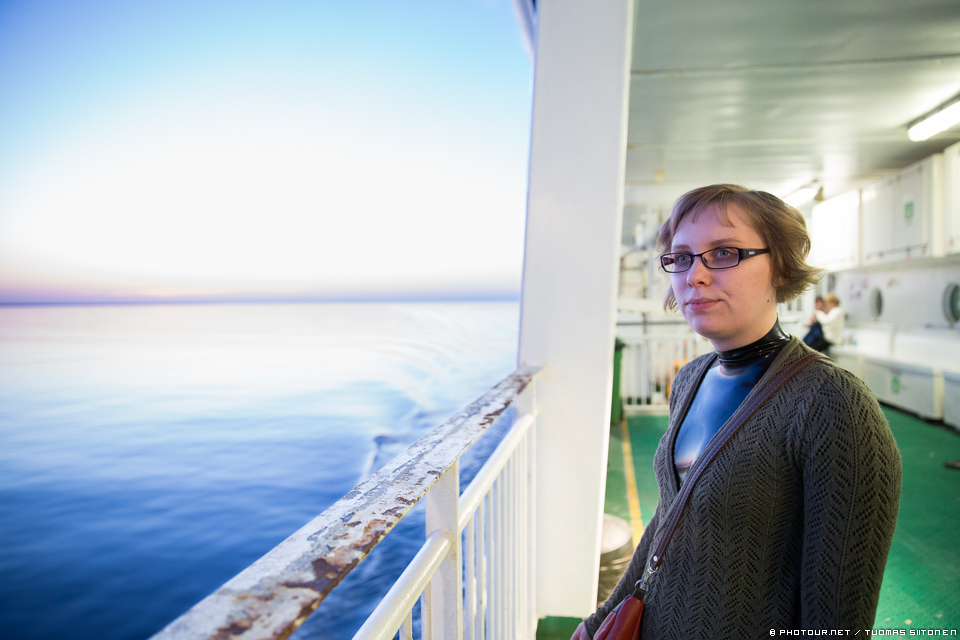 The sun was setting on the Estonian waters. 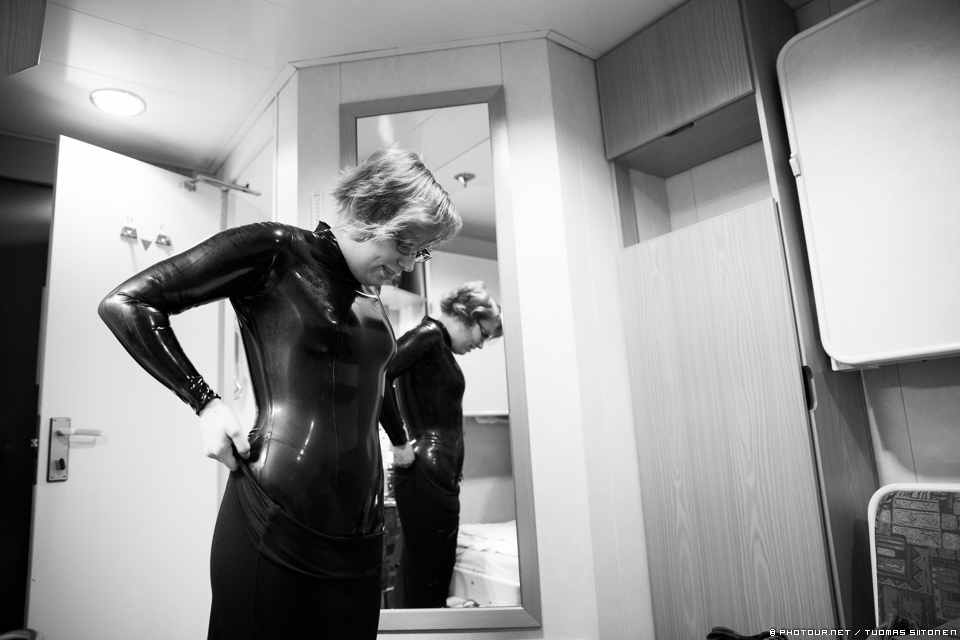 Miia testing out her choice of outfits for the nightclub. 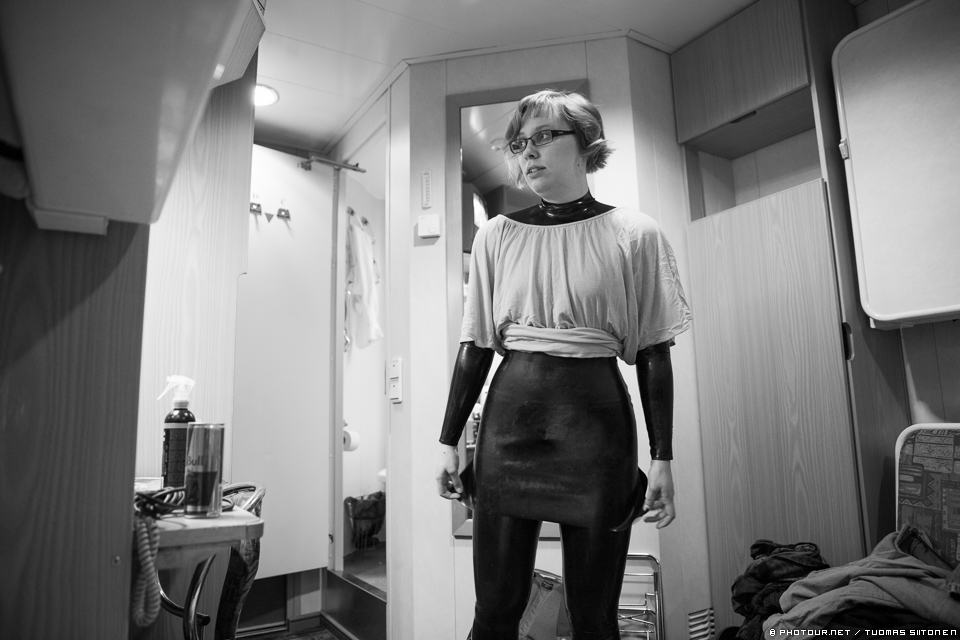 The end result was a latex mini-shirt tailored by Tiina Rikala. 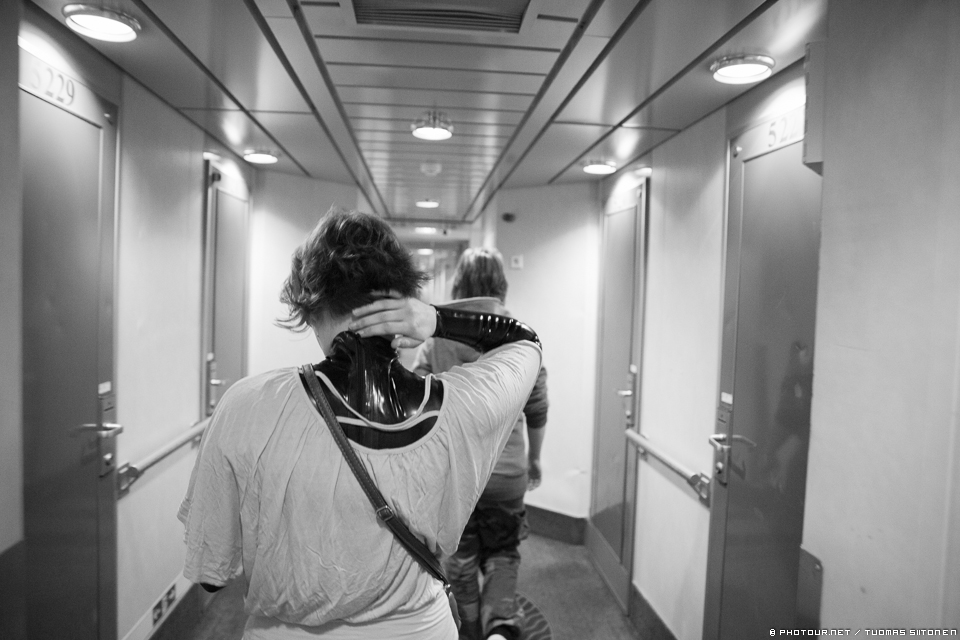 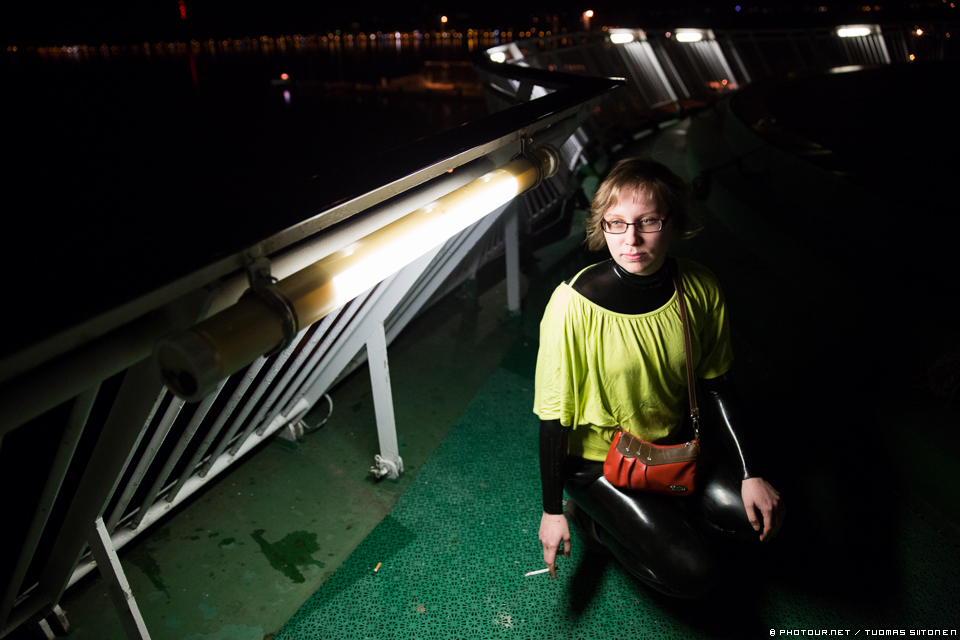 A cigarette break. The ship was docked at Tallinn’s port. 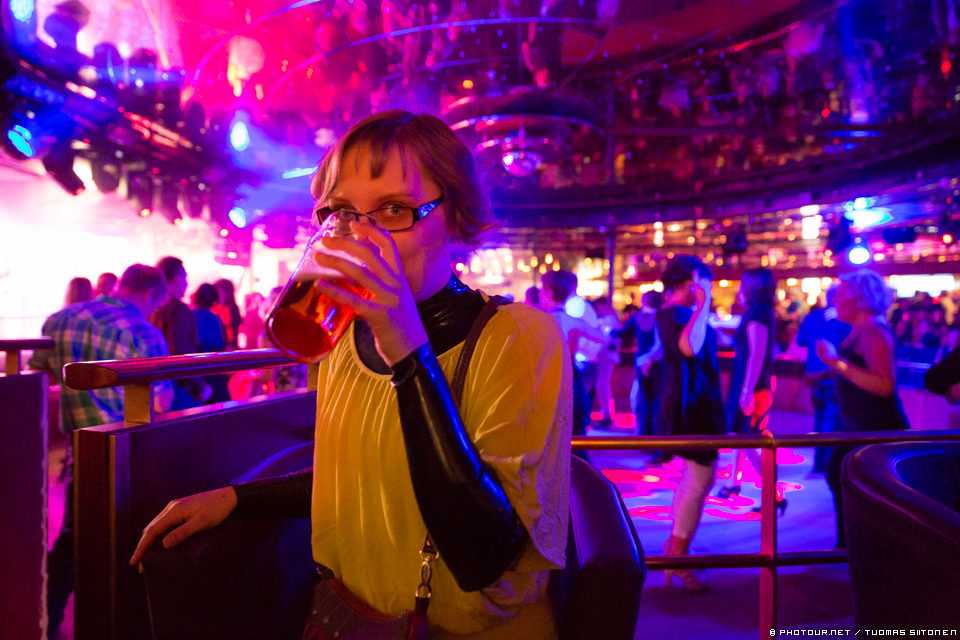 The party was just getting started. Miia was excited. 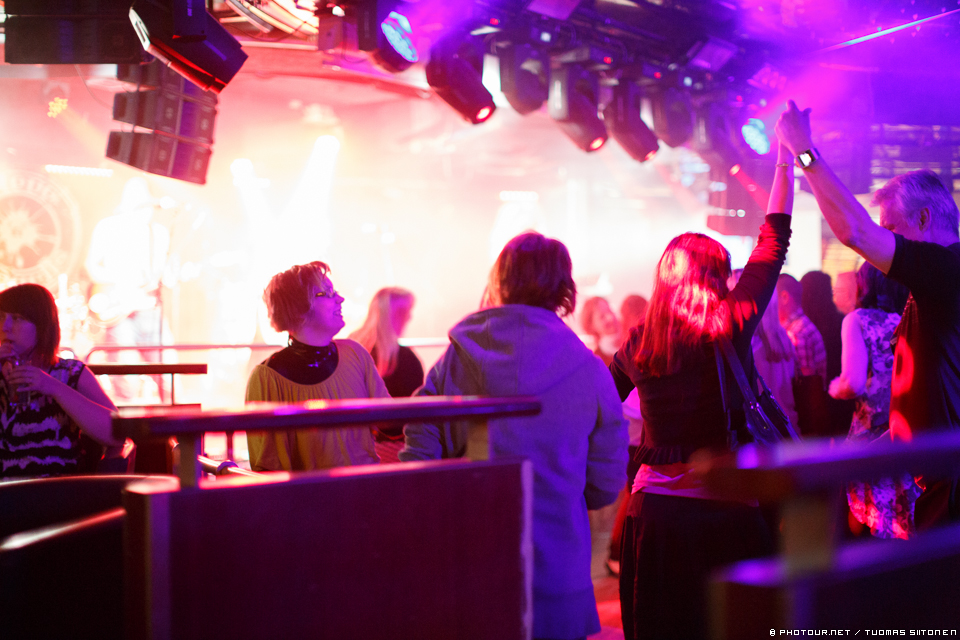 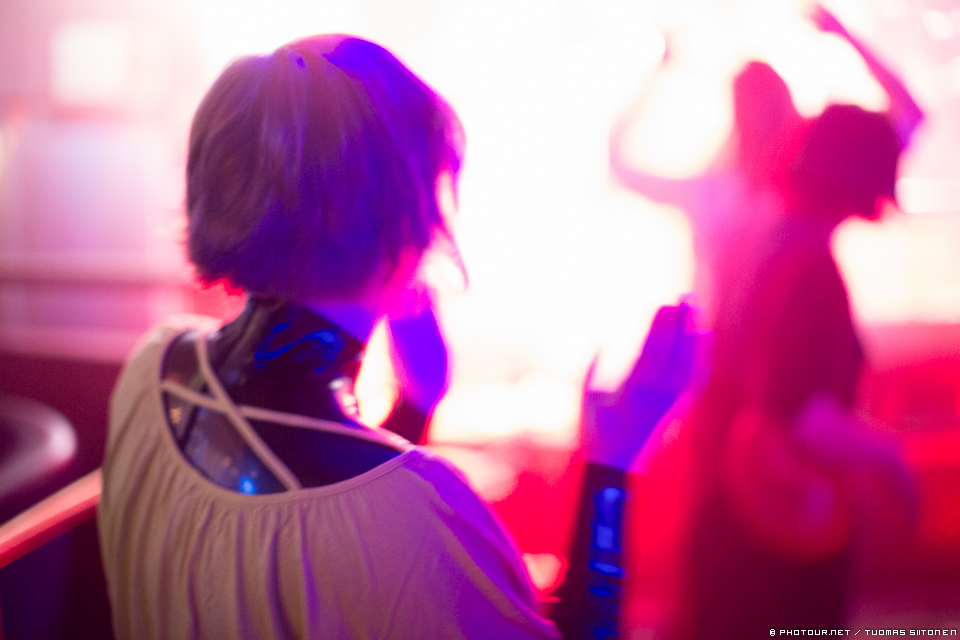 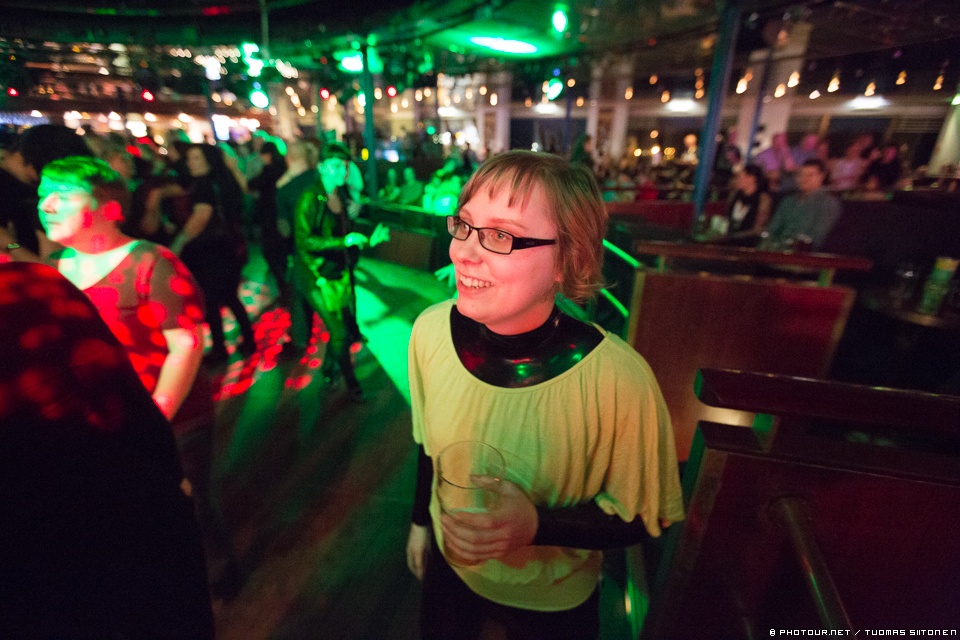 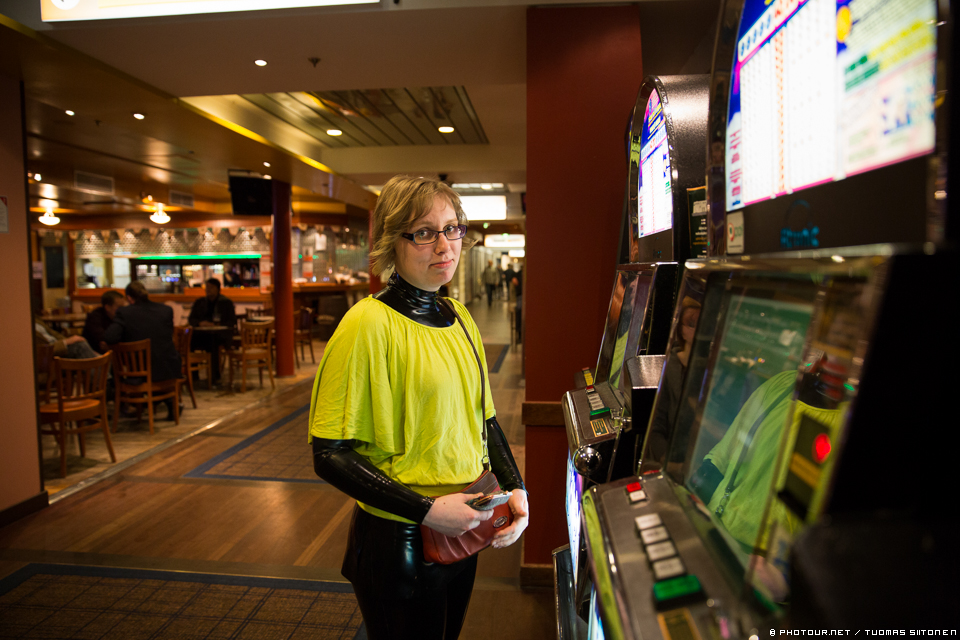 She lost. Could’ve you guessed? 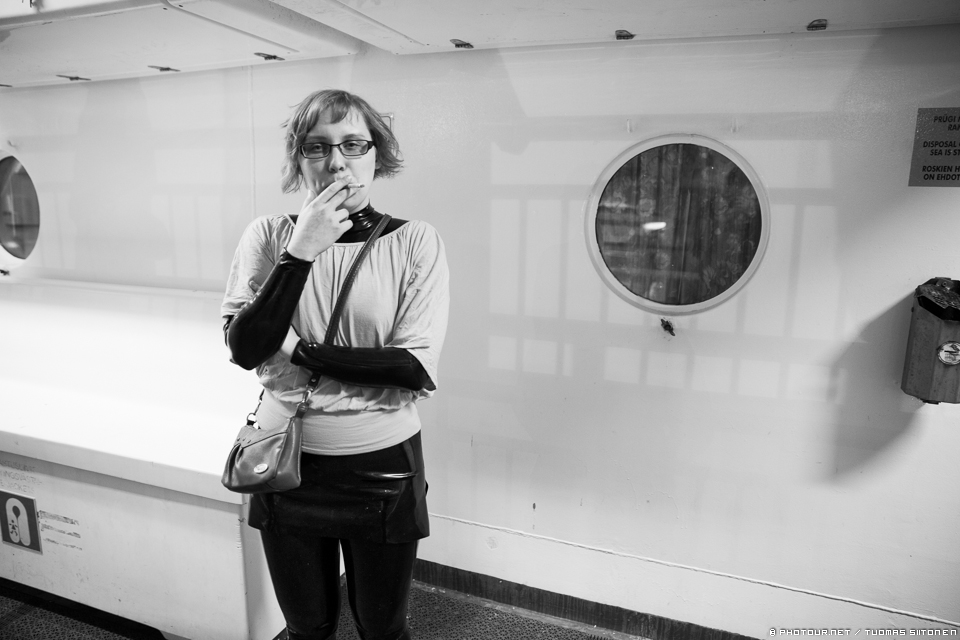 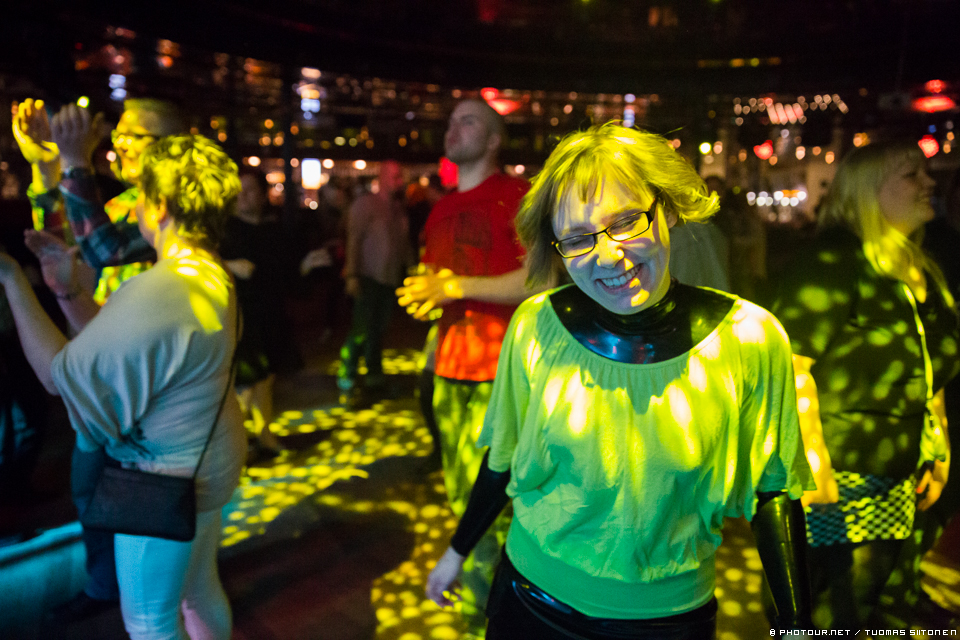 In no time the band continued and everything was fine again. 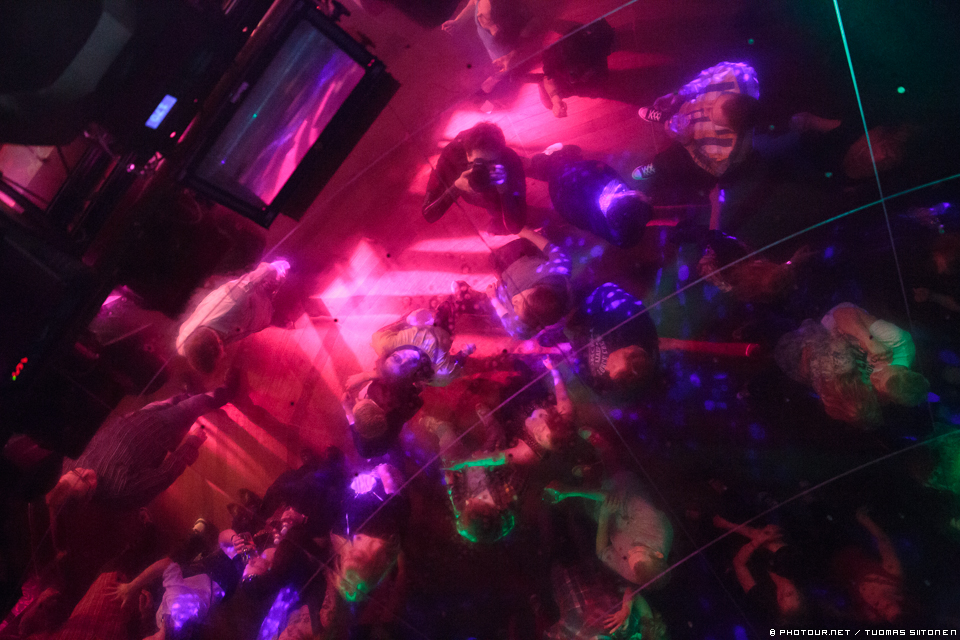 A discreet selfie through the reflective roof of the nightclub. 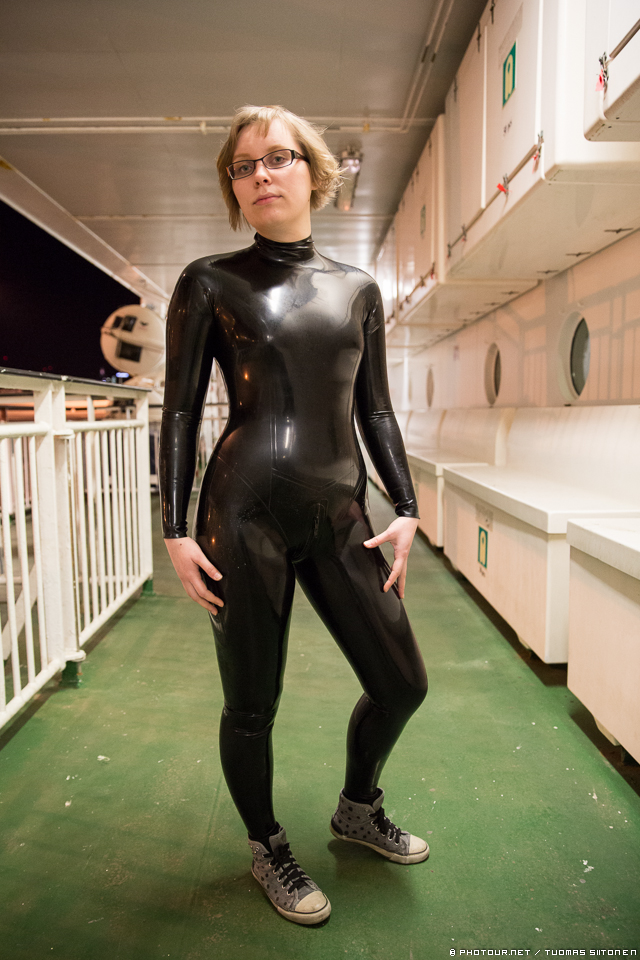 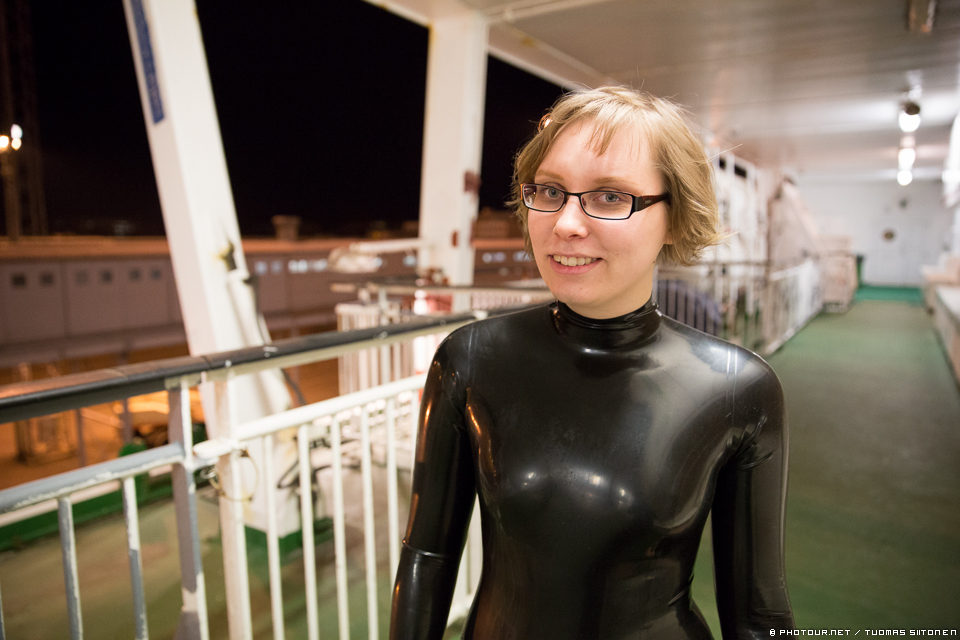 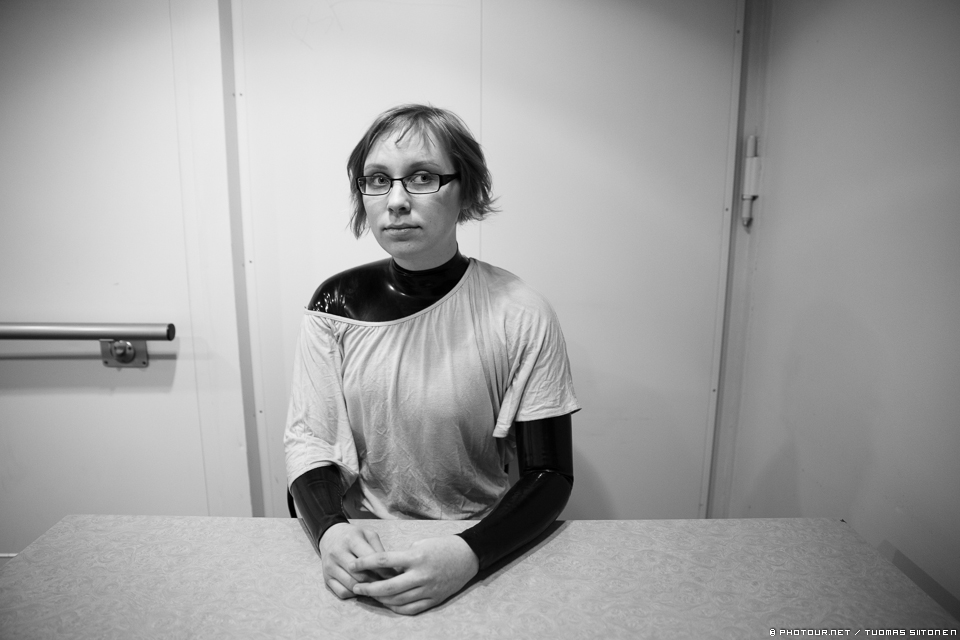 The obligatory “sitting behind a table” photo, present in multiple other Project Ls. 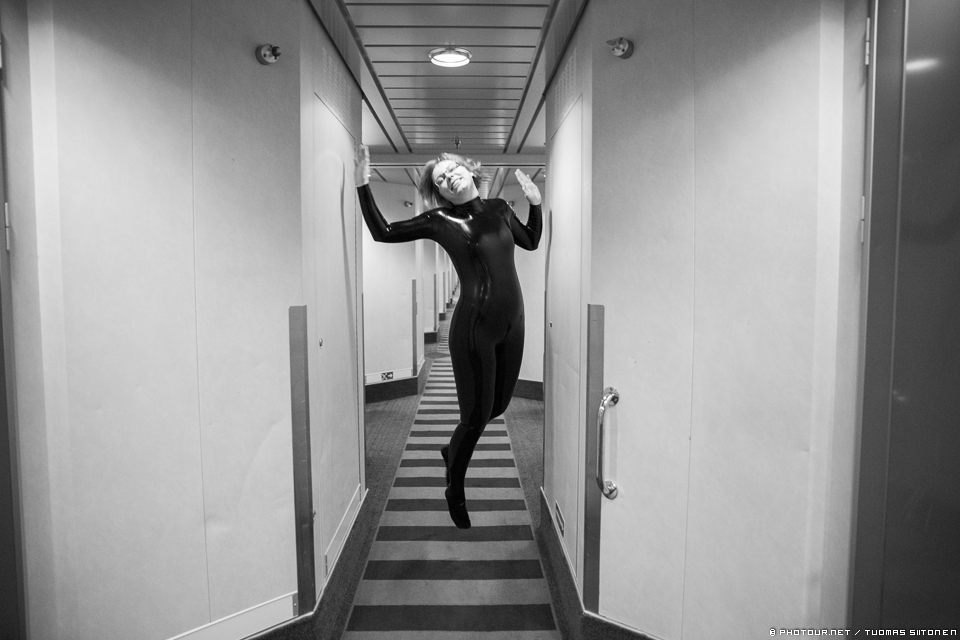 The evening was rather splendid and merited a portrayal of delight, presented in a form of a hop.