The Finnish government has been issuing new policies on saving money to battle the ongoing recession. These savings are e.g. cutting child benefits, limiting the amount of tax deductions one can do, and raising the taxes on gasoline and cigarettes.

This caused an uprising amongst some of the Finns, who usually prefer to protest from the comfort of their homes by clicking “like” on Facebook and filling out addresses. It’s rather rare that Finns get up and protest, so much was expected from the event by the participants – perhaps too much, to be honest. According to police, there were estimated only less than 1,000 protestors.

Original purpose of the protest was somewhat unclear, as the organizers had quite a few disagreements over on what to protest. Some of the organizers had some strong opinions about e.g. immigration, whereas the majority of them disagreed.

The consensus of the protestors itself seemed to tumble around demanding to replace the government, but then again some were against the North Atlantic Treaty Organization, whereas some wanted to free the internet.

When some of the crowd started to chant the prime minister of Finland, Jyrki Katainen, to face them, nobody dared to tell them that the office hours were already over, thus nobody was in the house of parliament.

The actual protest went on rather calmly, but the riot police had to resort into using pepper spray when the crowd got violent.

Also, when the wind brings particles of the spray to one’s face, it tastes like pain. 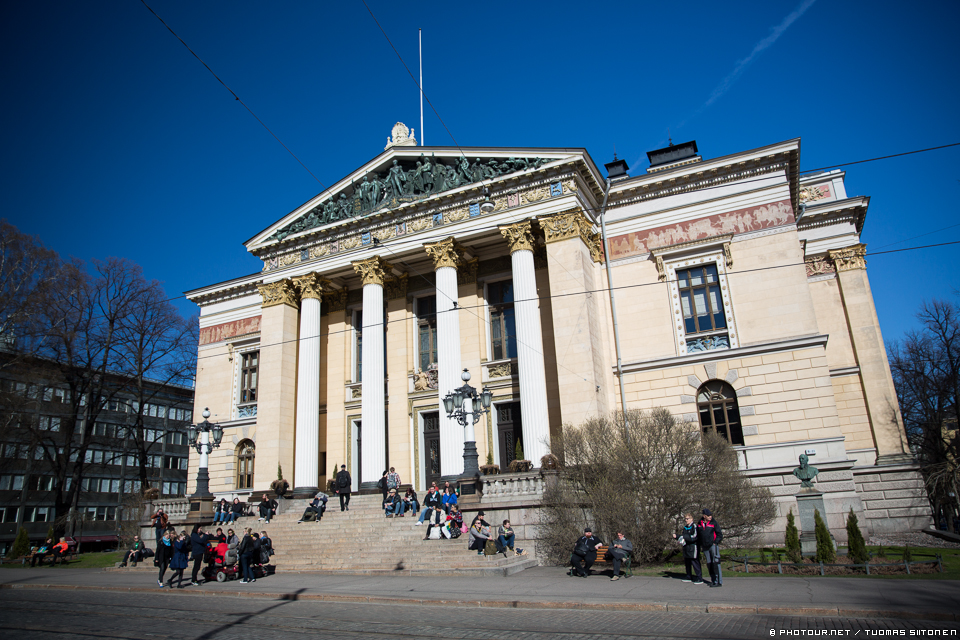 People gathering to Säätytalo, the starting point of the protest. 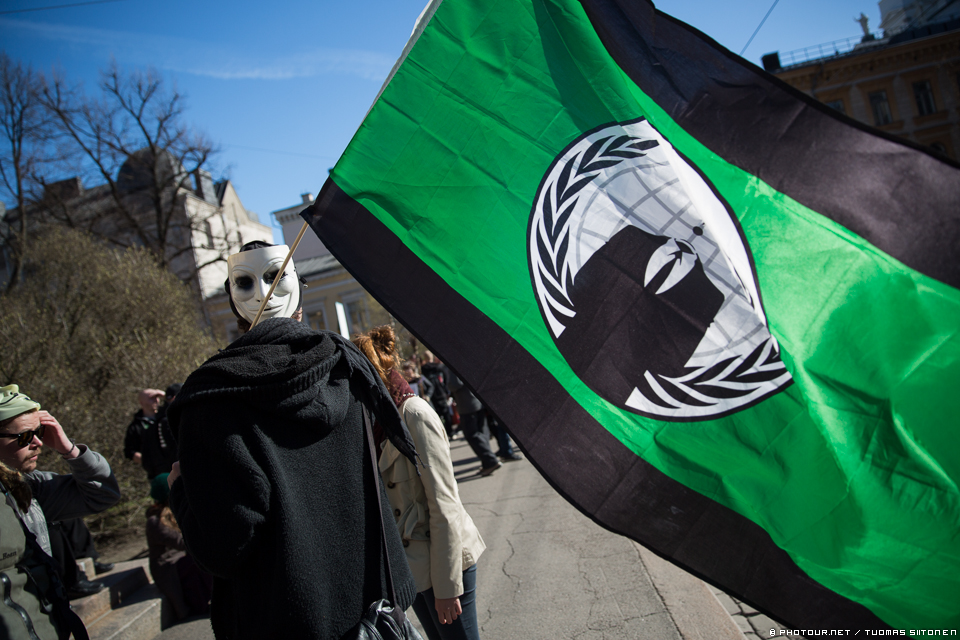 A protestor wears a modified Guy Fawkes mask on the back of his head whilst holding a flag symbolizing Anonymous. 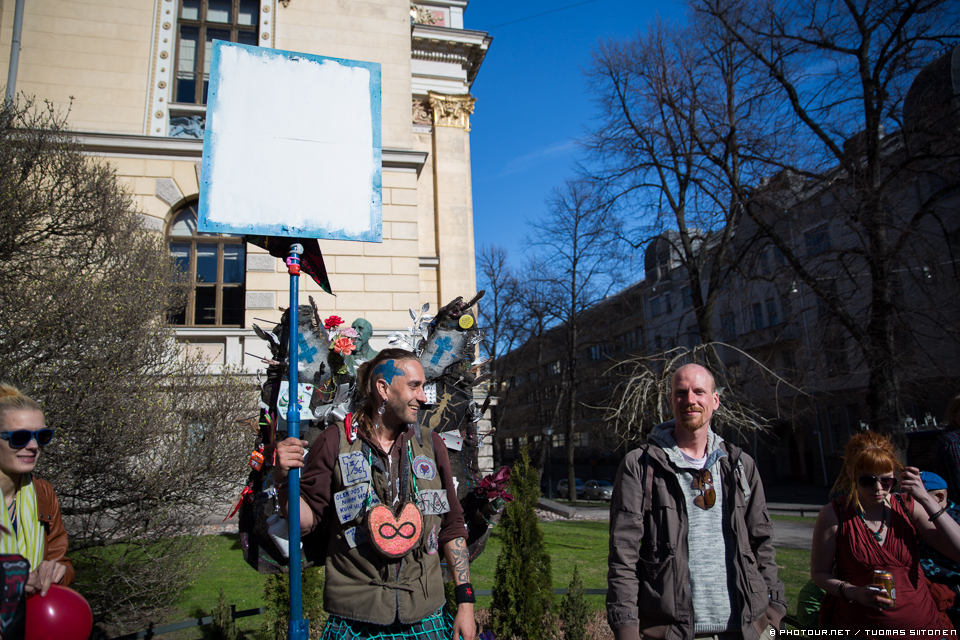 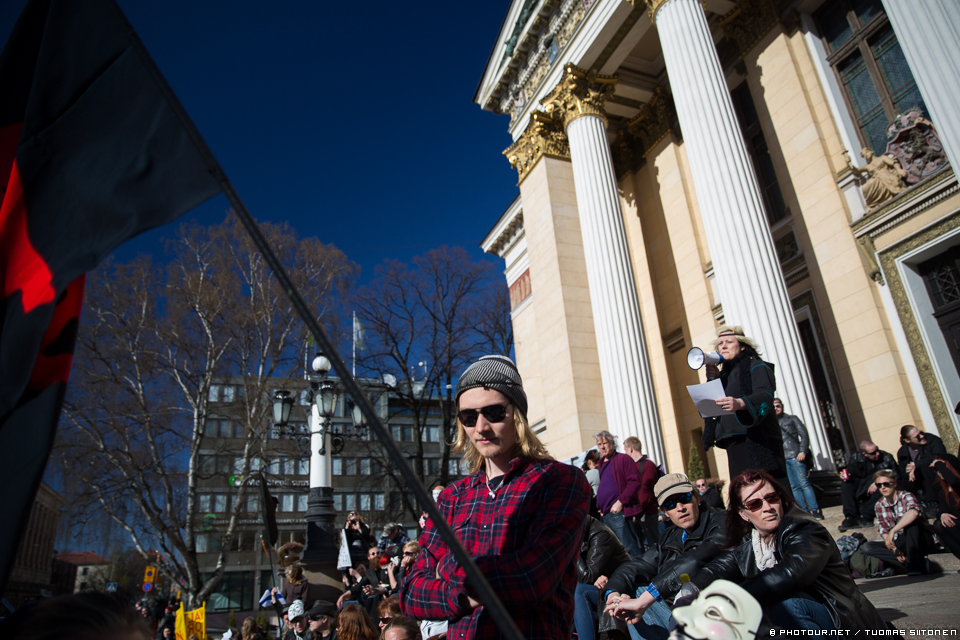 First speeches of the protest were given from the stairs of Säätytalo. 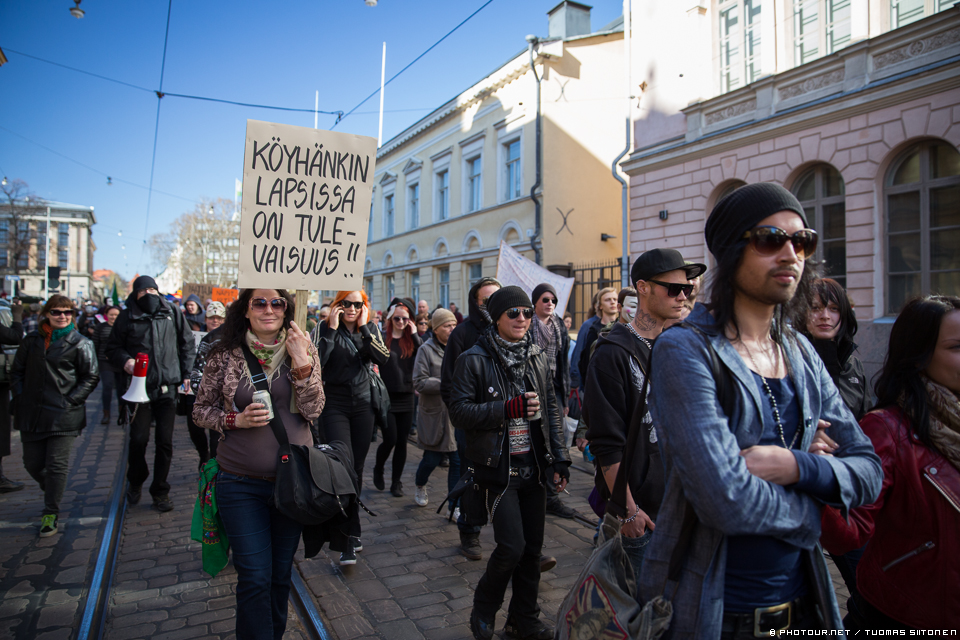 The protestors started their march from Säätytalo to the house of parliament. The sign translates to “there’s future in poor’s children too”. 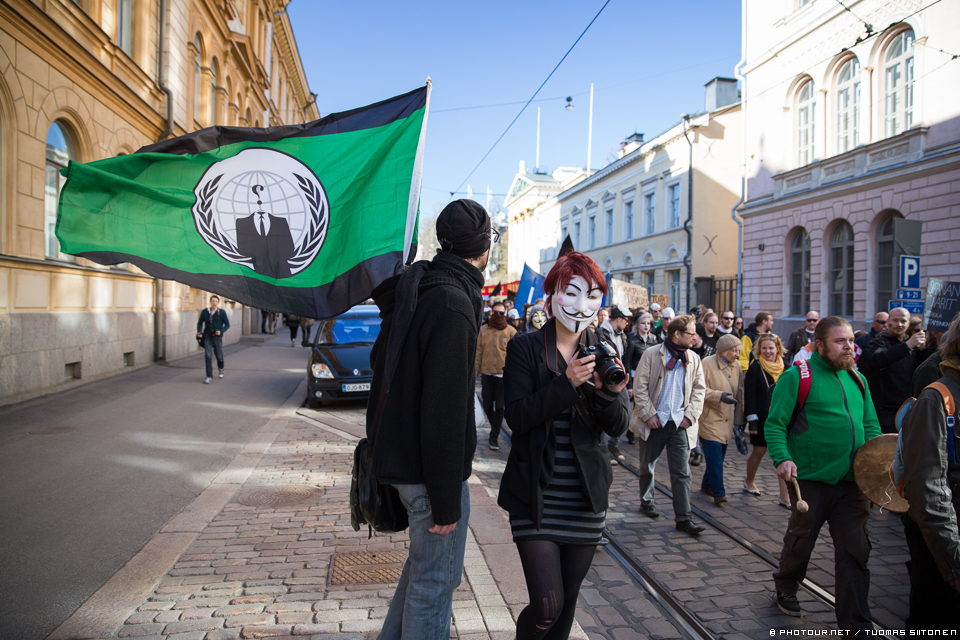 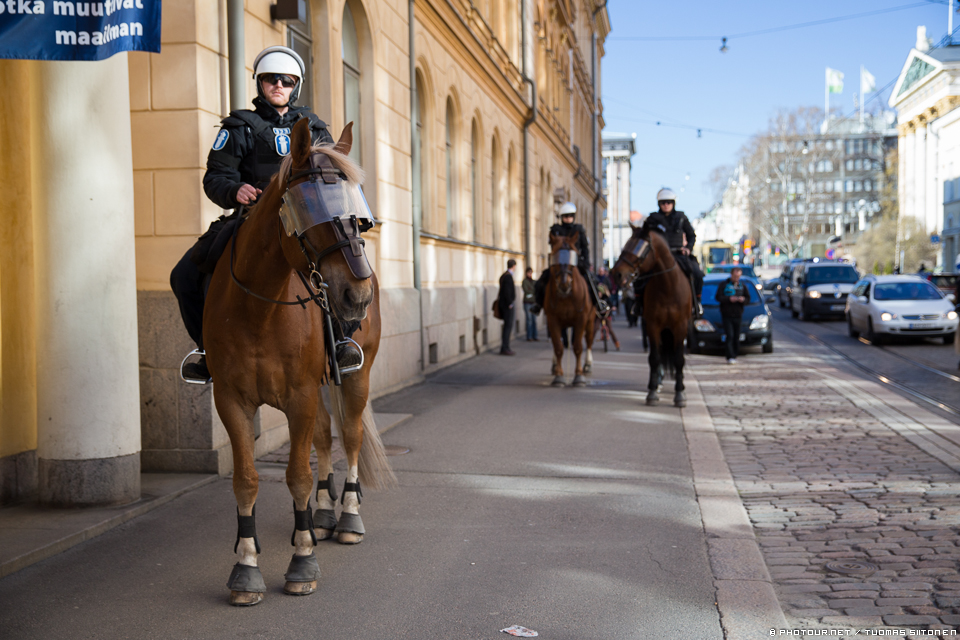 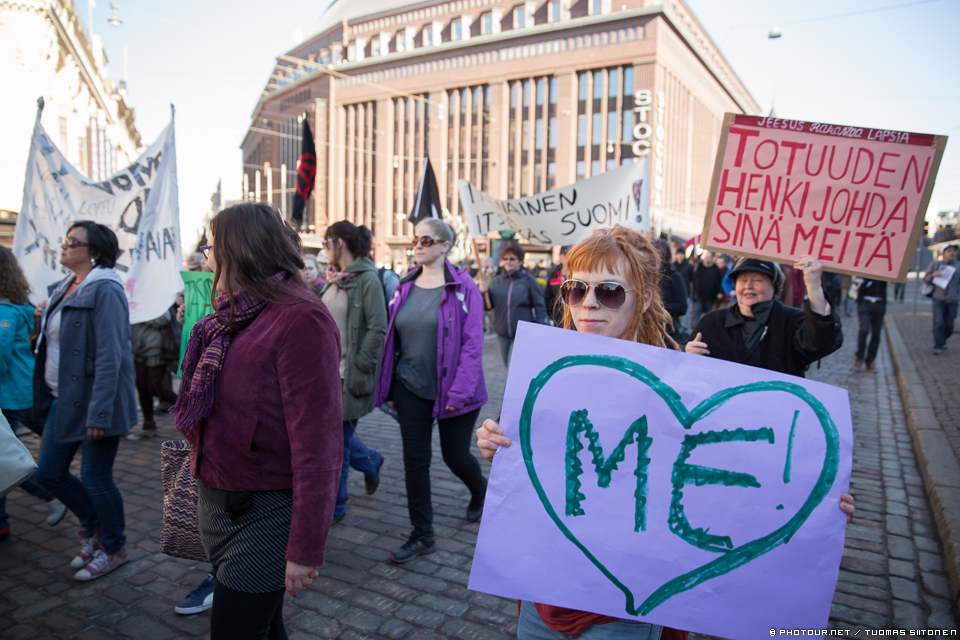 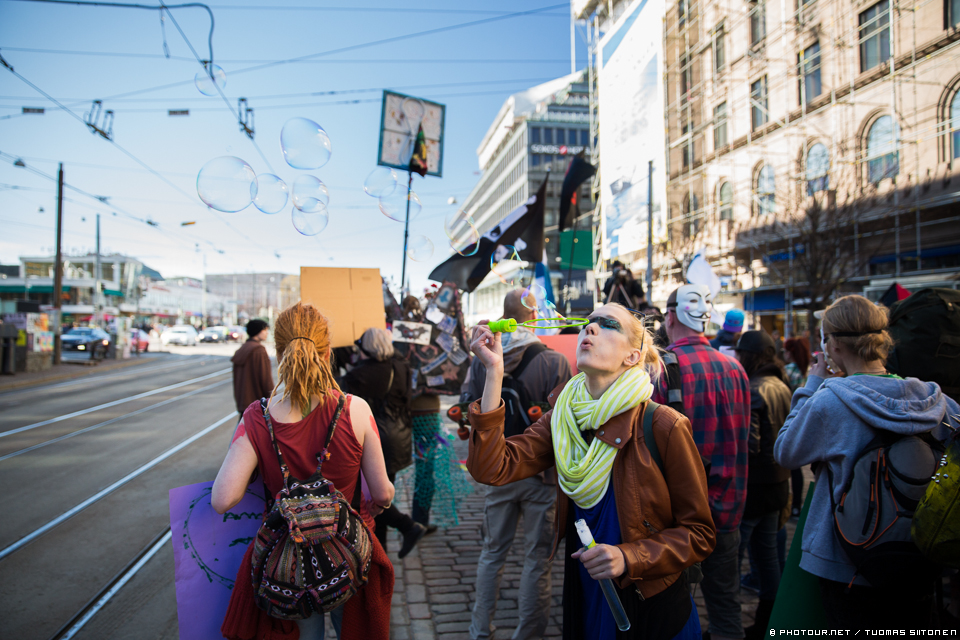 A protestor blows out bubbles on the march from Säätytalo to house of parliament. 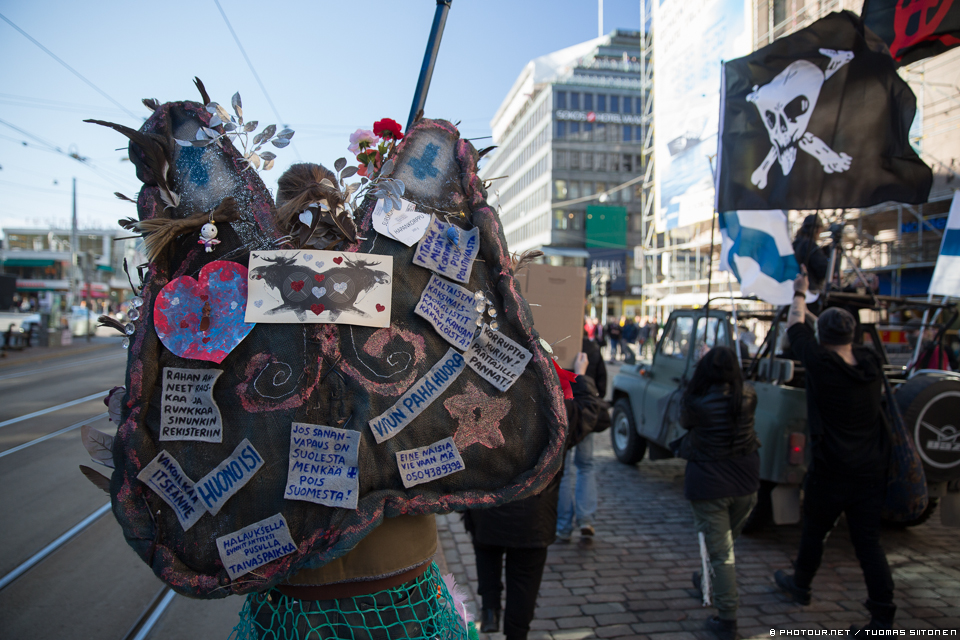 The behind of a protesting fairy. 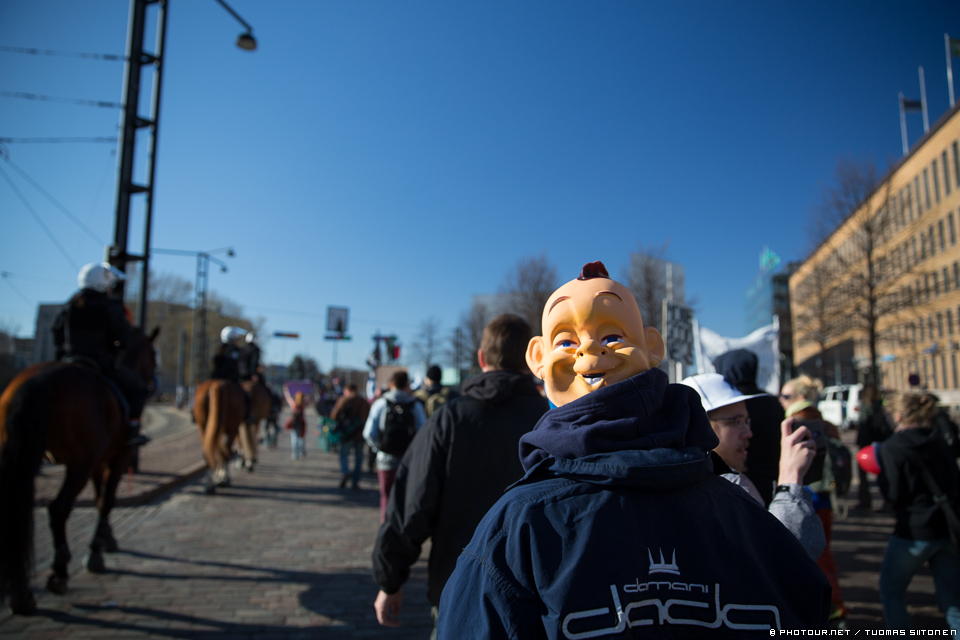 A protestor wears a mask to cover his neck. 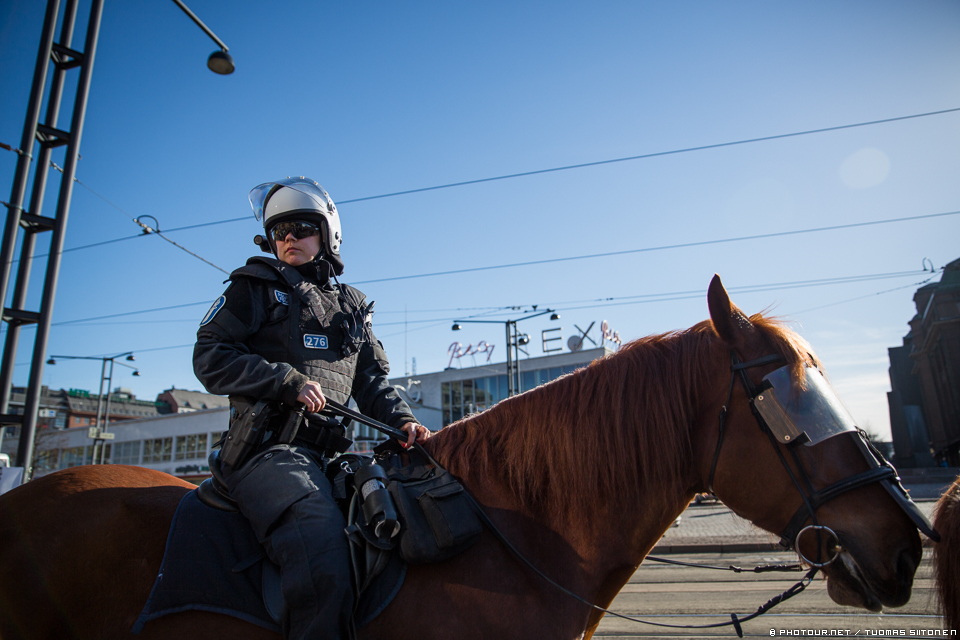 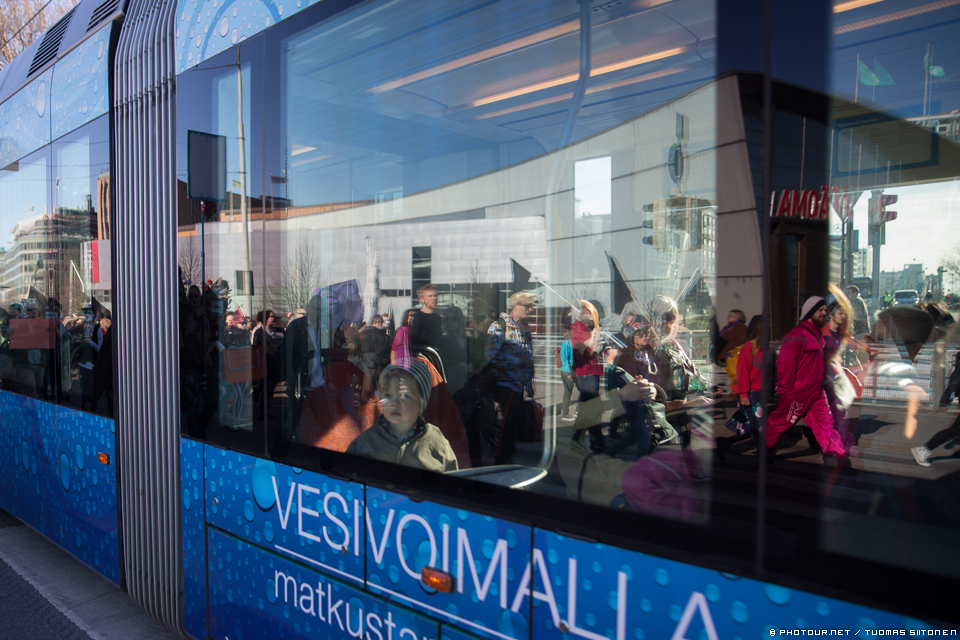 A surprised child views the protest from a passing tram. 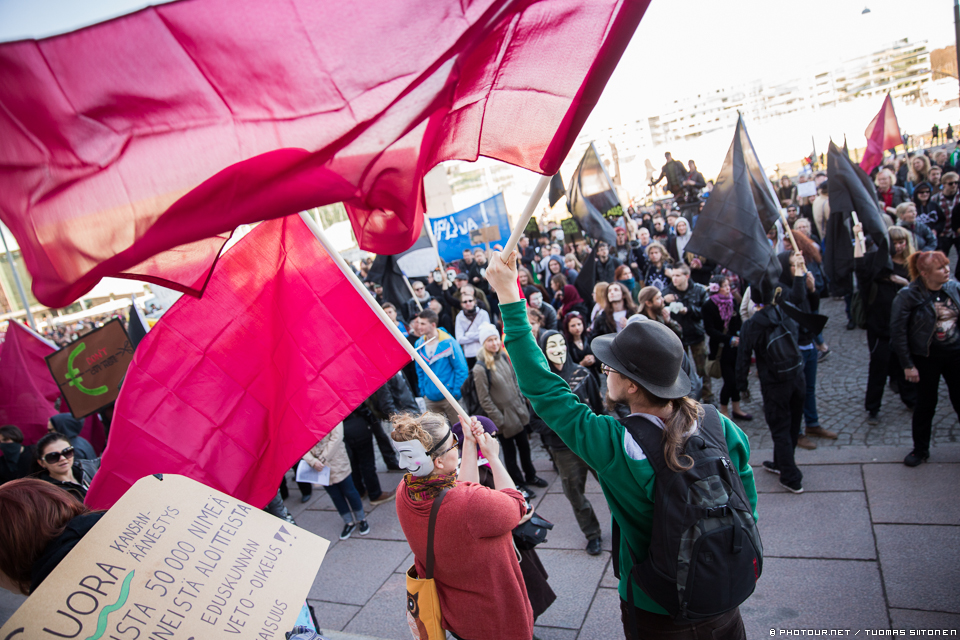 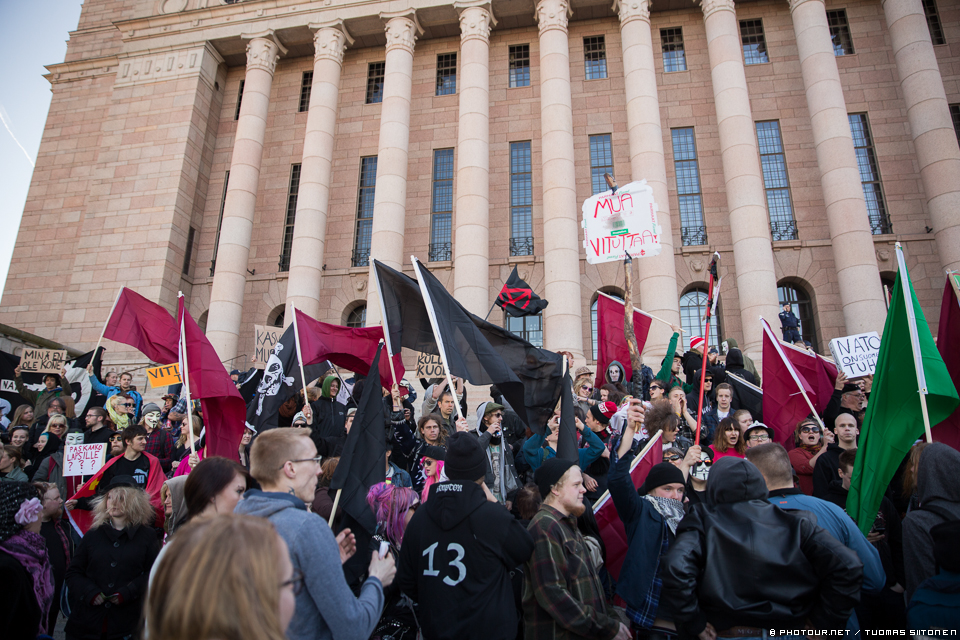 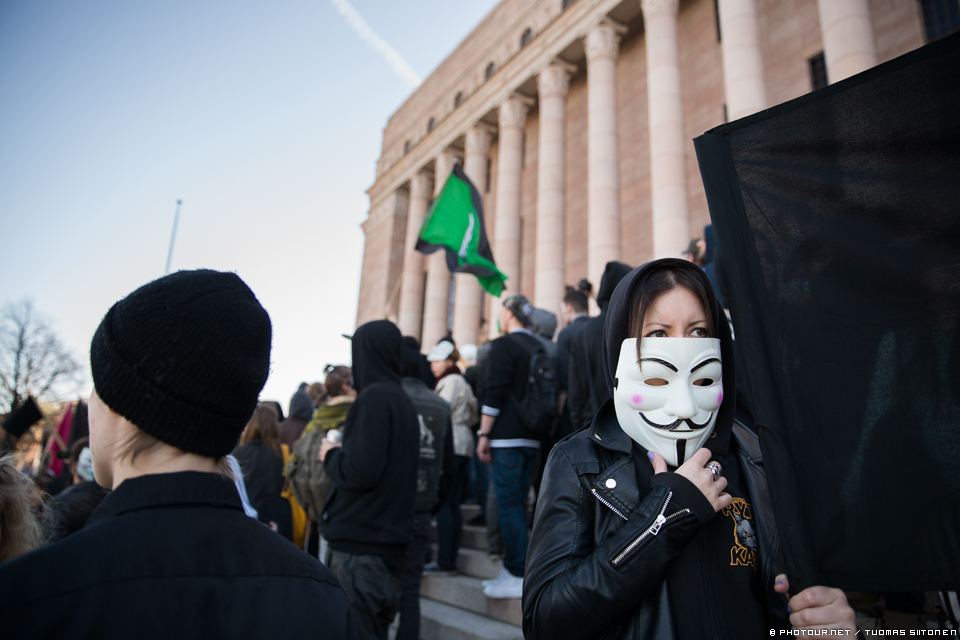 A girl lowers her mask from her face to see better. 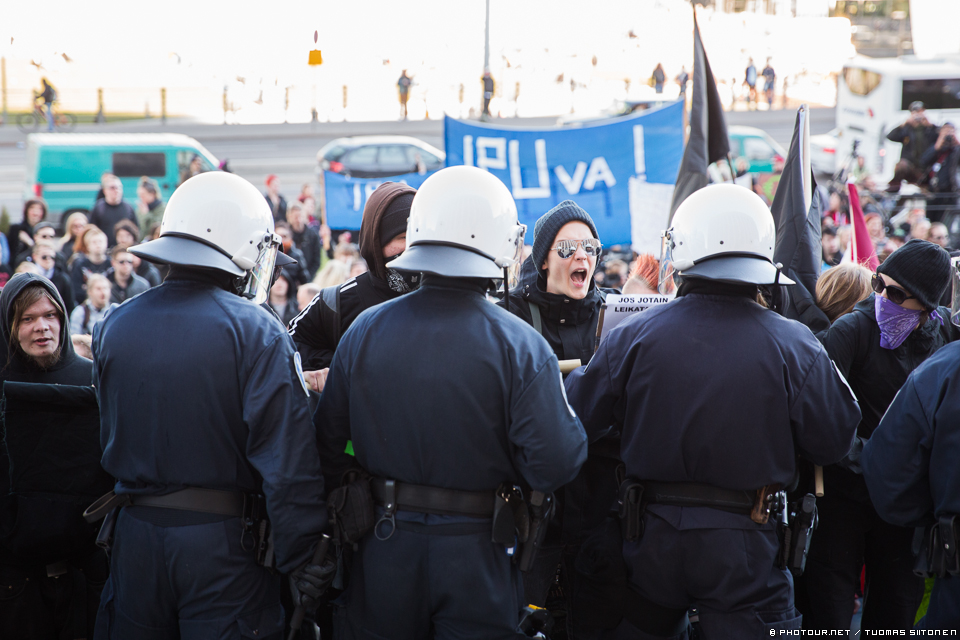 A gentleman with a strong opinion about the prime minister Jyrki Katainen. 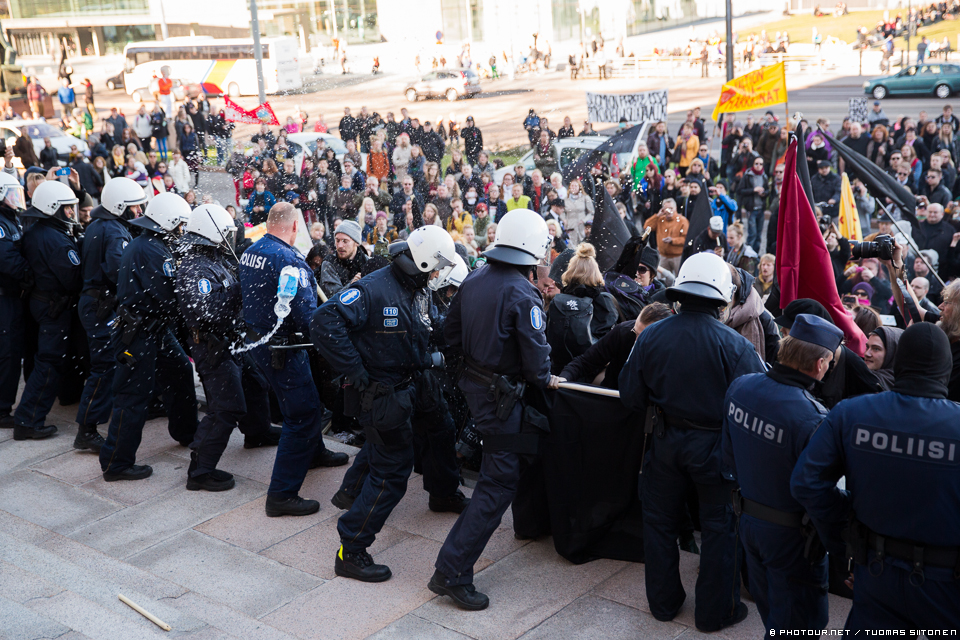 The crowd got rather violent and started pushing, punching and throwing bottles. 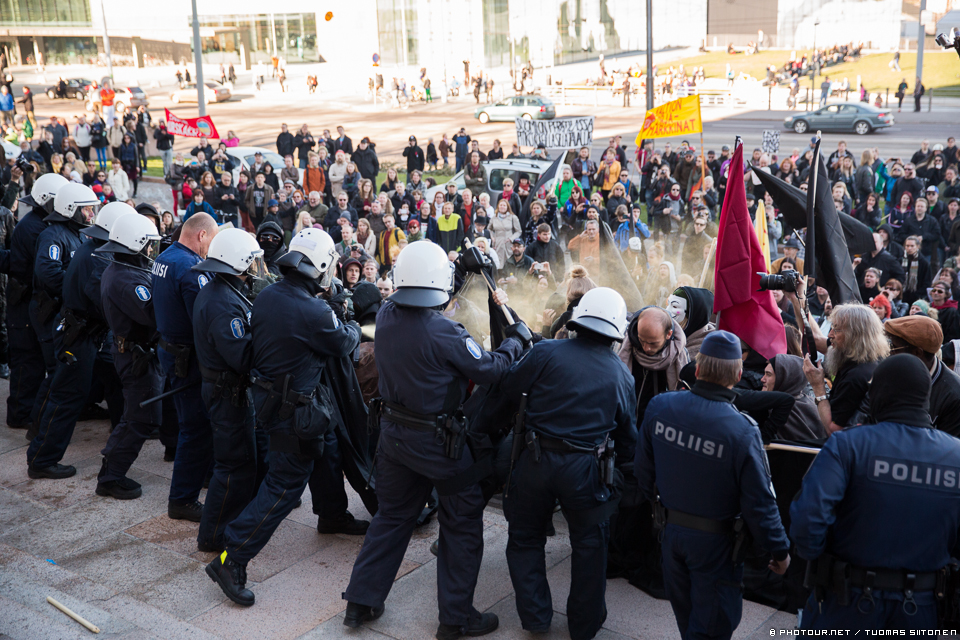 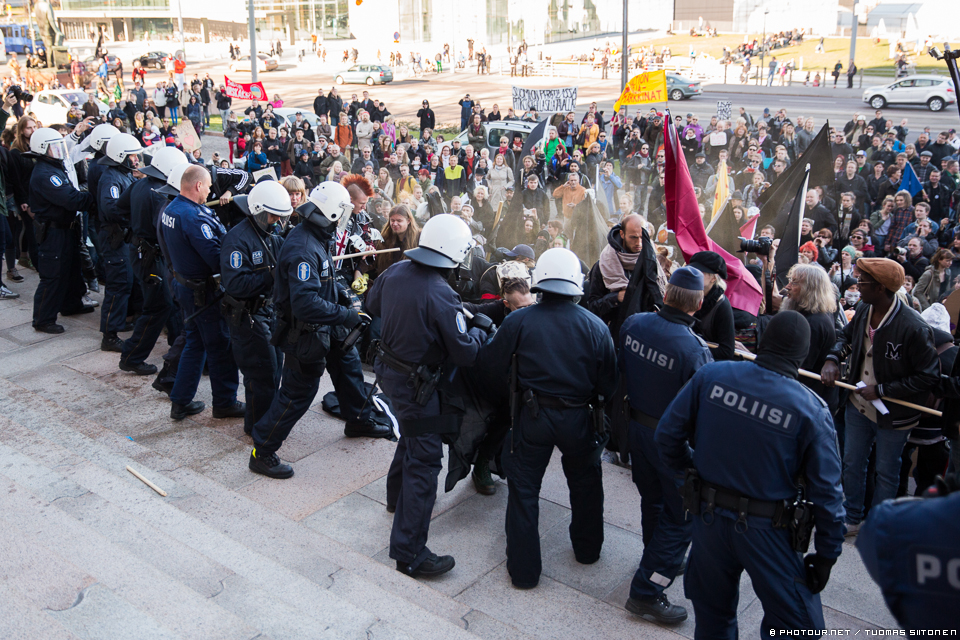 The spray dissipated the crowd rather efficiently. 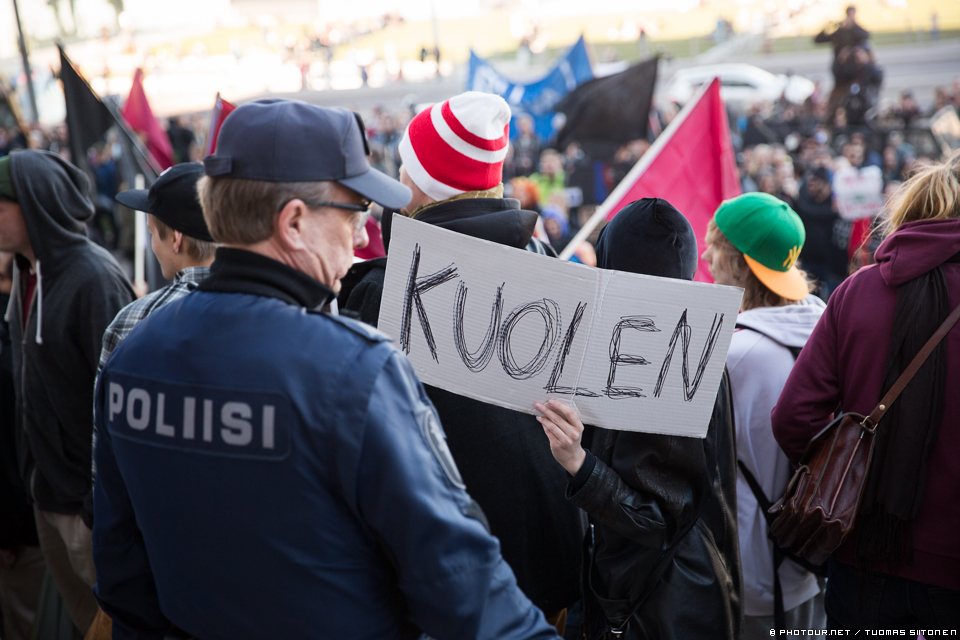 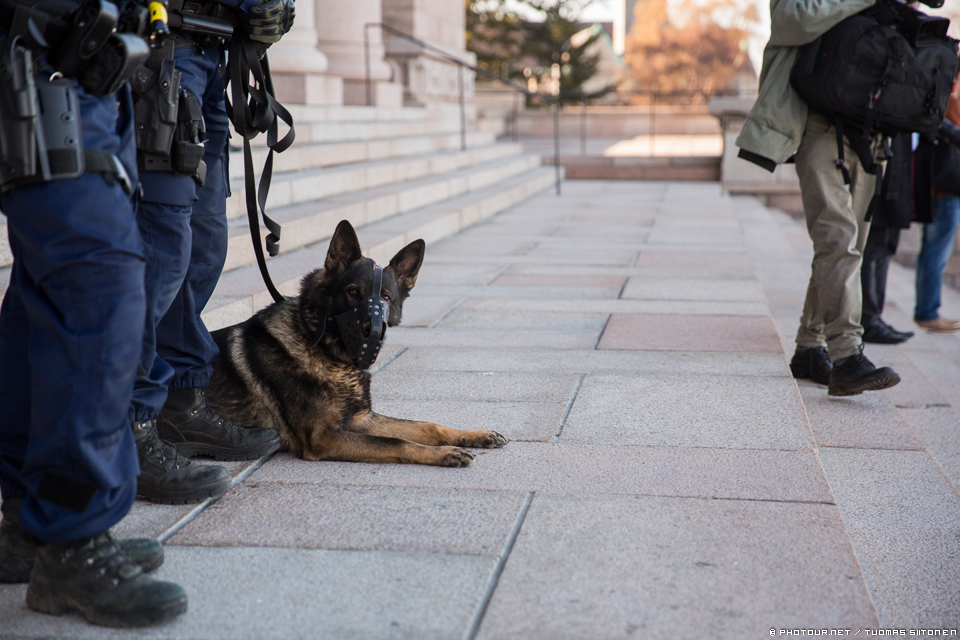 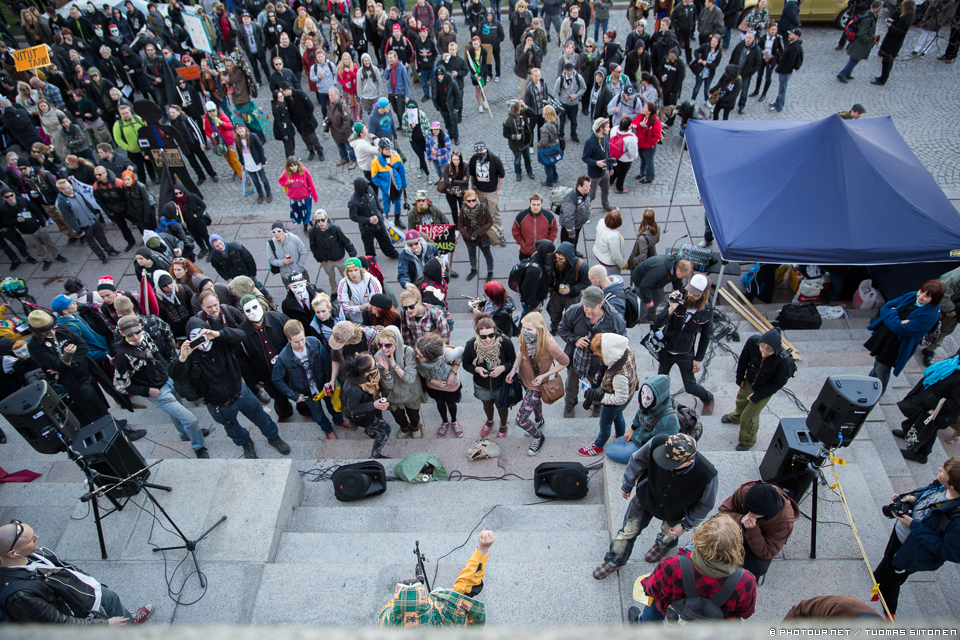 Many speeches were given that day. 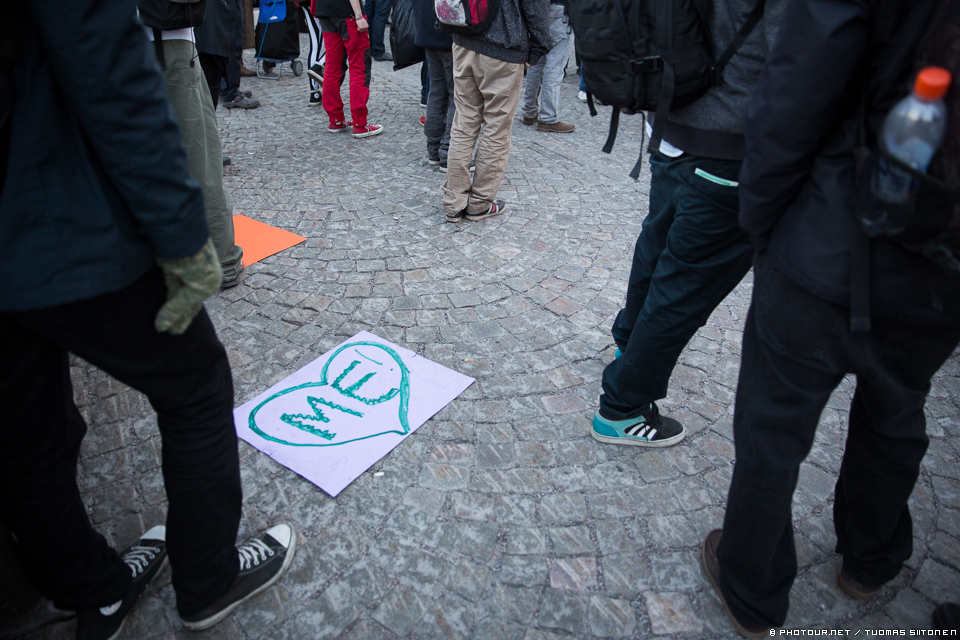 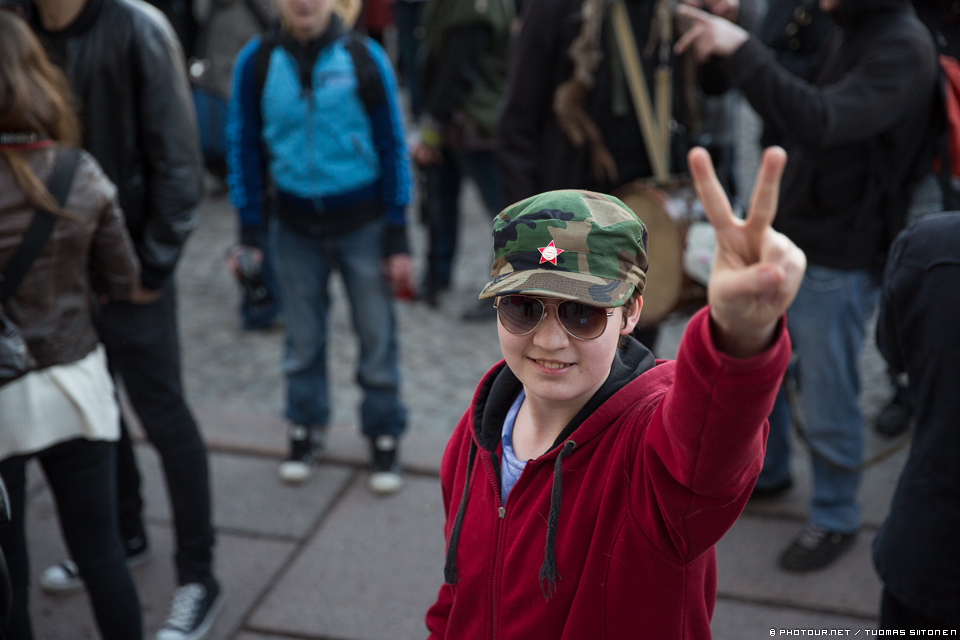 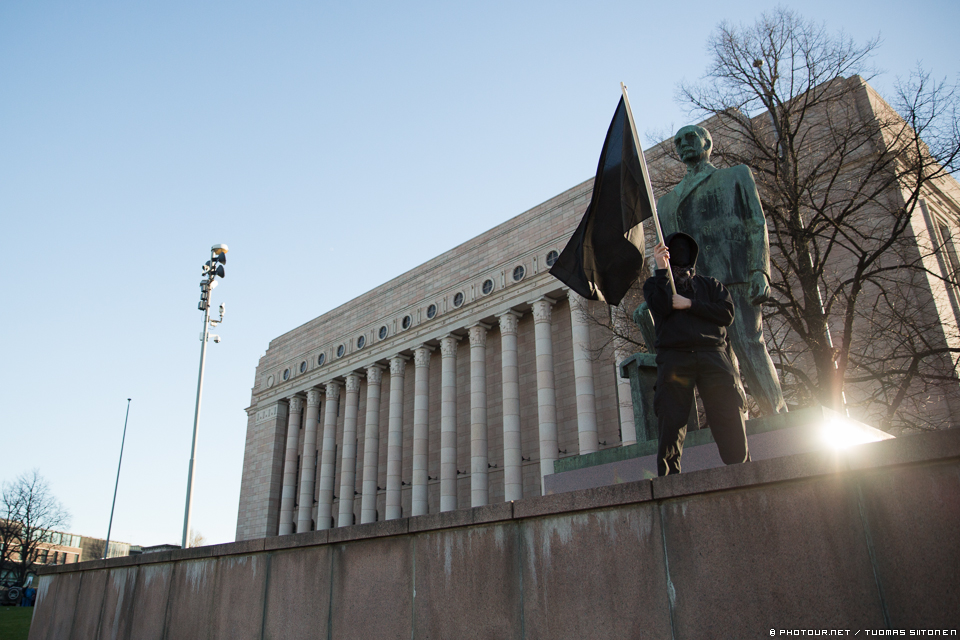 The protest didn’t last for that long. After three hours the crowds started to scatter.