No, the title isn’t written incorrectly. It’s a clever pun of some sort.

“Streat Helsinki is all about street food. It’s an idea of what it should and could be. It’s a concept with a mission of praising and pioneering the countless opportunities and potential of street food in Helsinki, as well as spreading the word abroad through our partners.” – streathelsinki.com

The traditional Finnish street food usually consists of “snägäri”, a form of stuffing yourself with the greasiest, most easily-made food available, such as hamburgers, kebab and French fries. And they’re almost always thrown into the deep-fryer from a freezer.

I don’t believe that I’ve brought it up ever before, but I’ve actually graduated from Helsinki culinary school of Perho, thus I’m claiming to be a professional of some sort on the subject matter.

As the Finnish tradition is what it is, I was very intrigued with the idea to present street food to Finns. And so were about 20,000 other people who showed up to the event, thus congesting the whole area of Kauppatori.

The idea was extremely welcome; well-made, perhaps a bit exotic meals to be offered from pop-up booths at the convenience of just dropping in and out.

The implementation wasn’t that good.

The lines were dozens of metres long and in order to receive one à la carte hamburger, one had to wait in a line for one and a half hour and pay 10+ euros for it. Yes. One and a half hour. At that convenience one could just go to a fine dining restaurant and order the best hamburger in the city and perhaps to get the head waiter to perform a tap-dance.

Who could’ve guessed that street food is that sought after in Finland? I certainly cannot blame the organizers of the event’s setbacks, as they had prepared themselves for 10,000 visitors – which would’ve already sounded overkill to me – but to get visitors double the amount? That’s insane.

The prices were way too steep, though. I don’t want to pay over 10 euros for a hamburger. I do understand that there has to be a price margin, but a street food entrepreneur has to find a way to bring down the price without bringing the quality down to the snägäri-level. 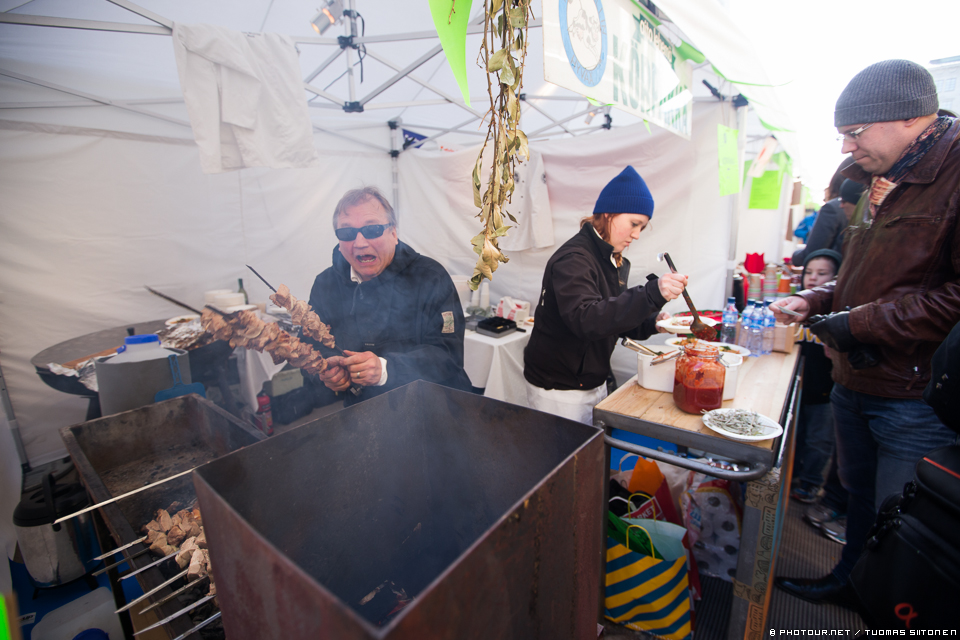 The overly excited salesman of Körpäkkä‘s street food booth presenting the shashliks on sale and giving freebies to passerbys. 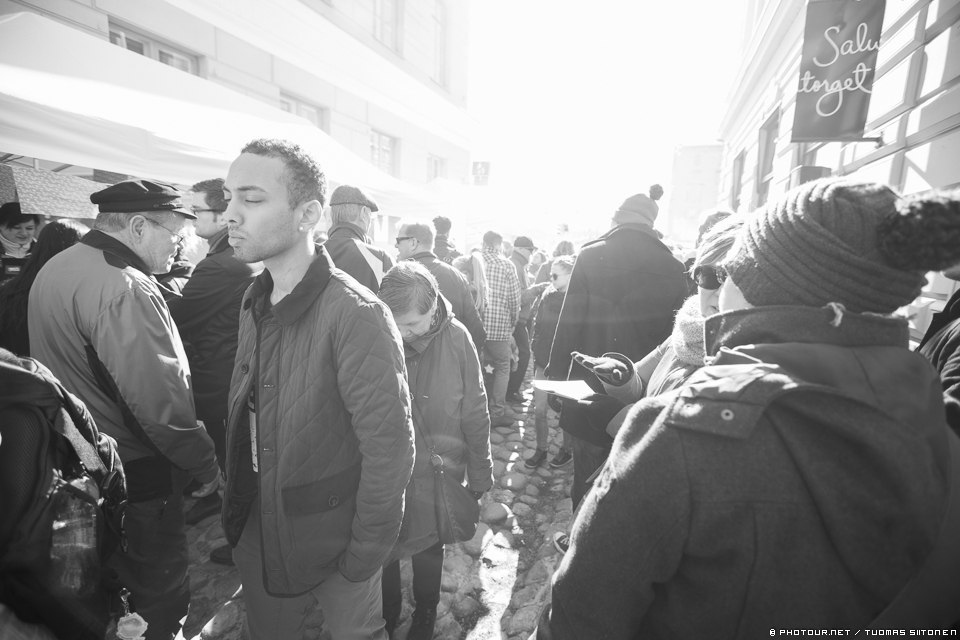 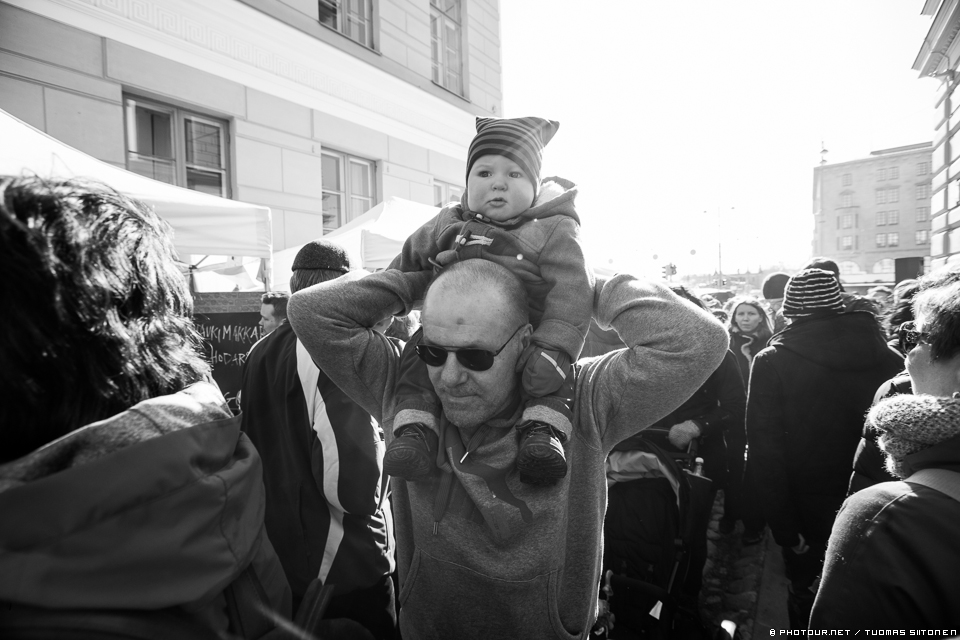 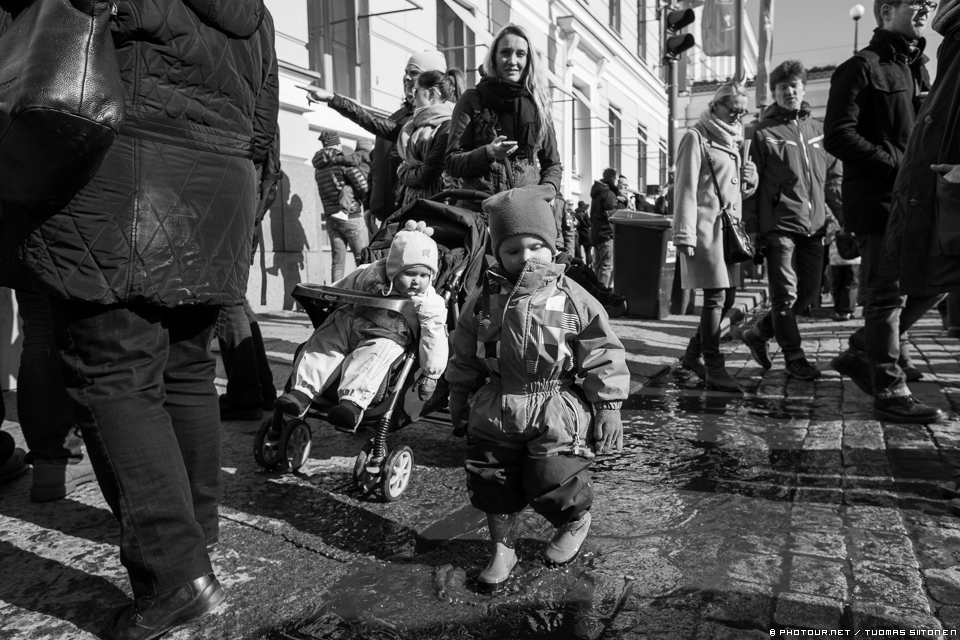 A child found himself a little joy between the masses of people, in form of a muddy puddle, whilst his sister watched the ongoing play. 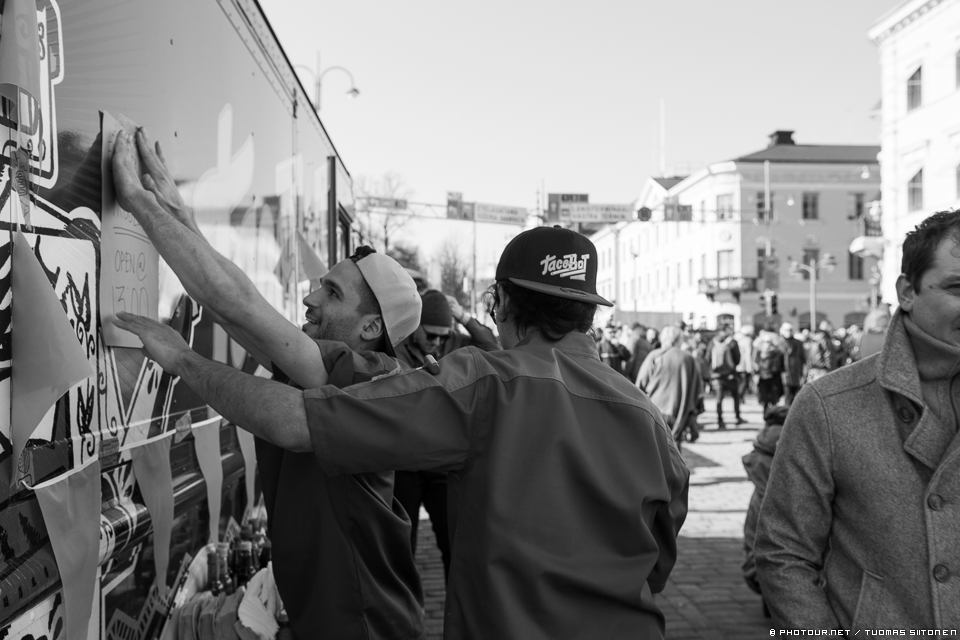 The workers of TacoBot putting up a sign signifying the opening hours; the booth opened only at 1 PM, whereas the official starting time was 11 AM. 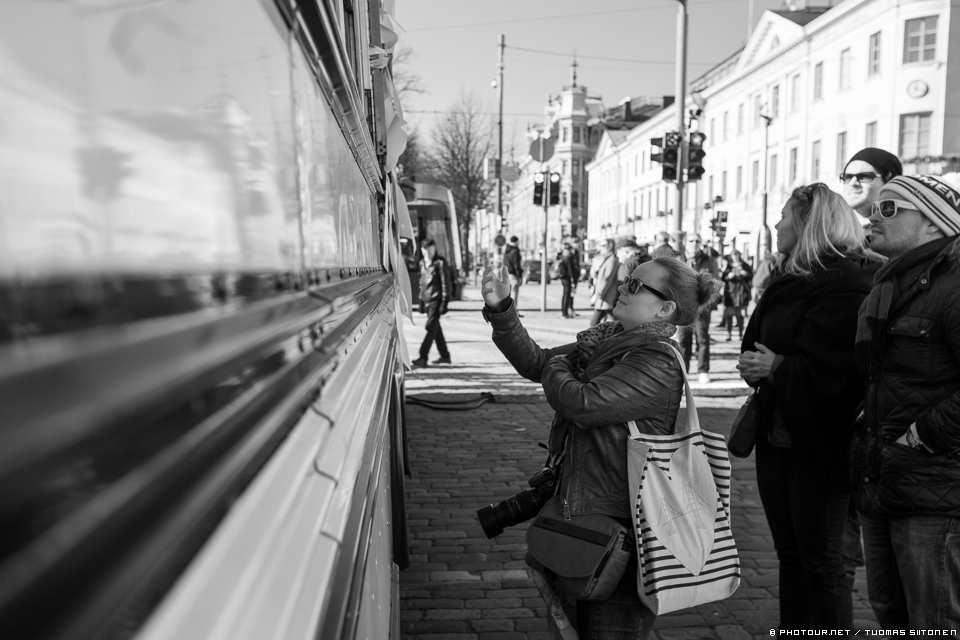 A customer receiving her order from the BBQ Bus. 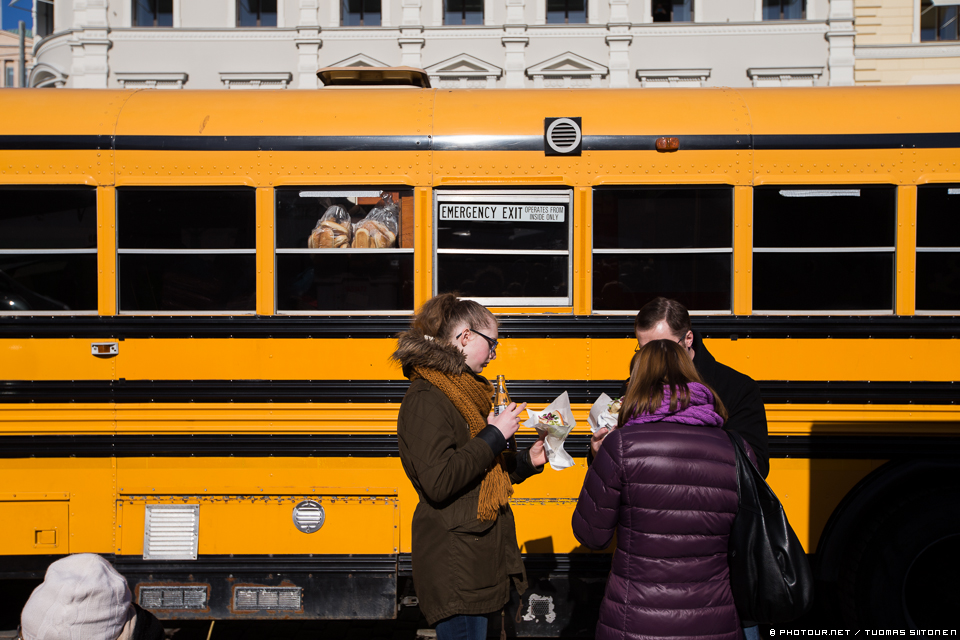 Customers eating behind the BBQ Bus. 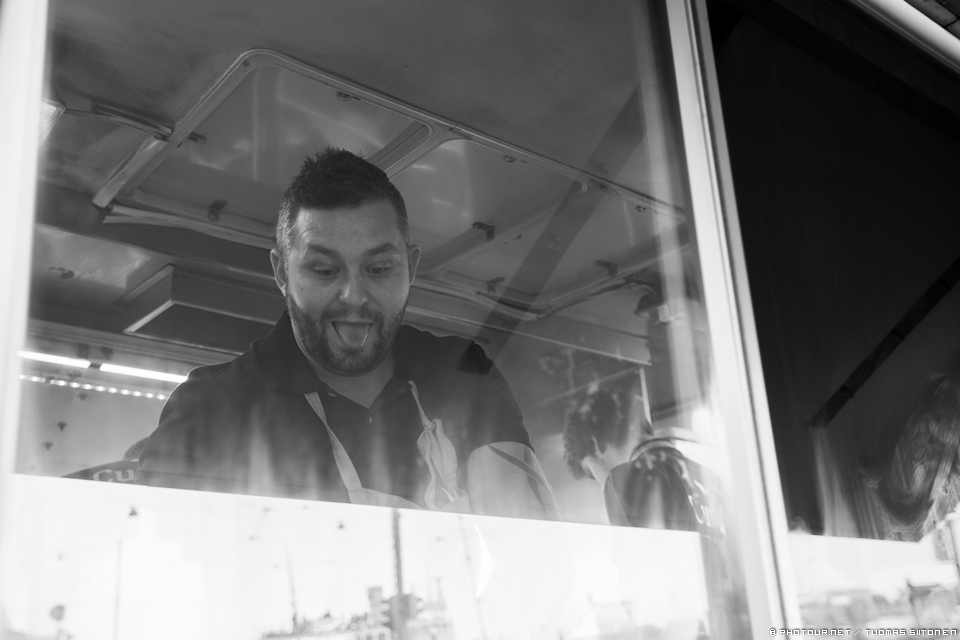 A busy chef of the Curbside showing off his magnificent tongue. 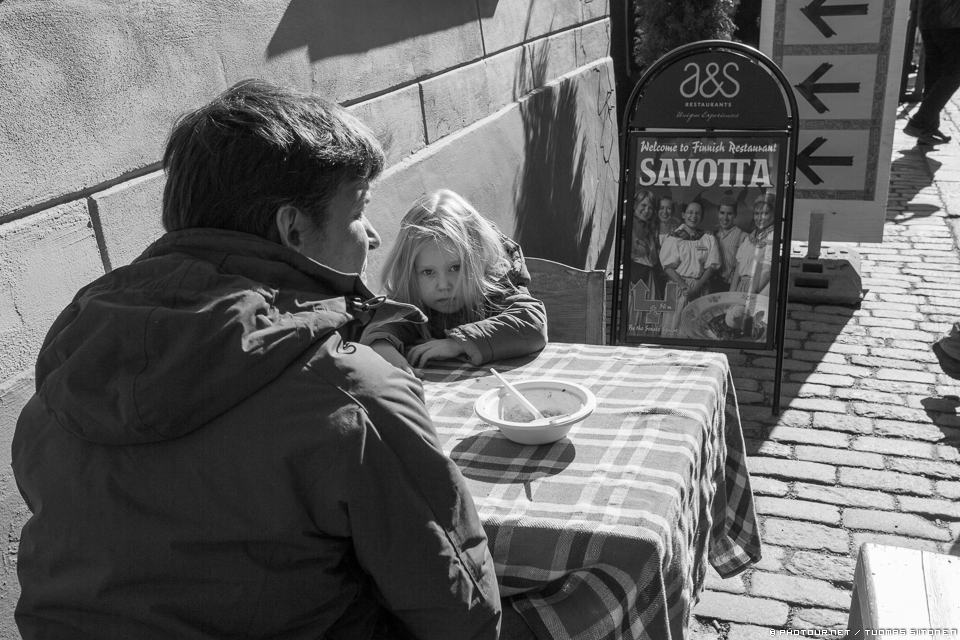 A young child at the table of Savotta. 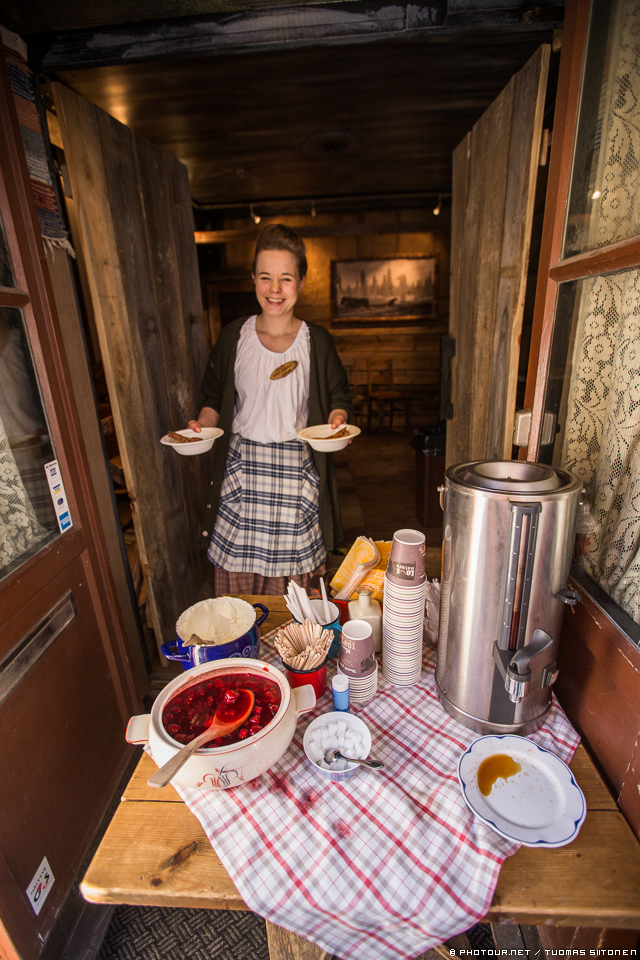 An extremely happy waiter of Savotta bringing French toasts to passengers. The strawberry jam had been flavoured with moonshine. 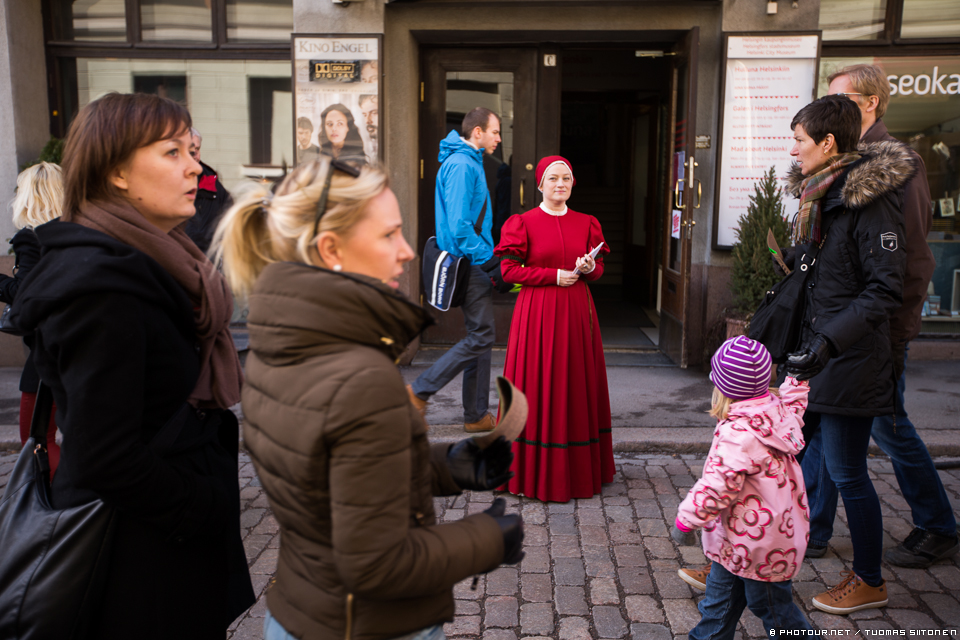 An actor giving out leaflets to promote a museum. 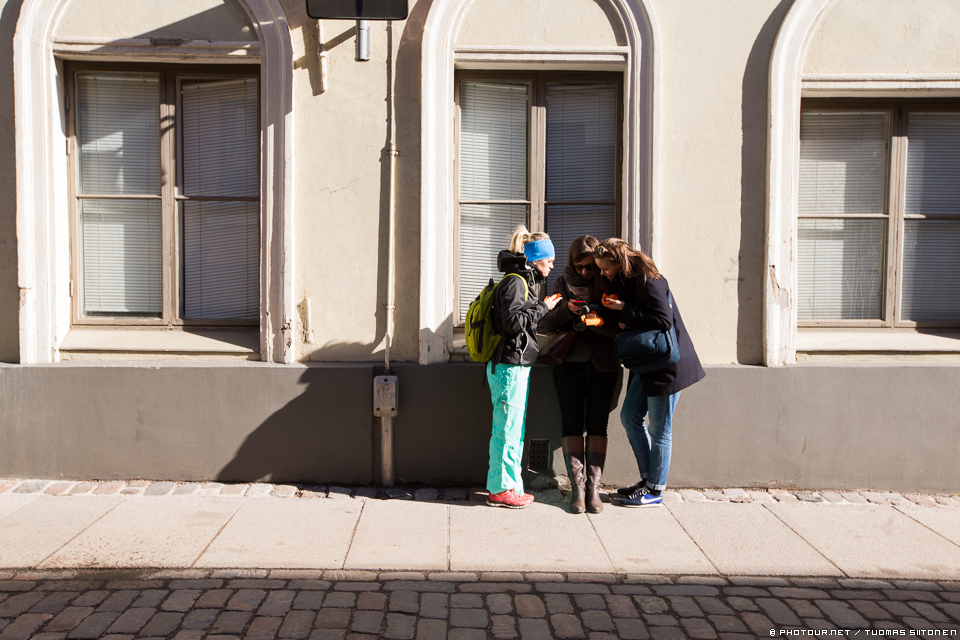 Three girls Instagramming about their brownies. 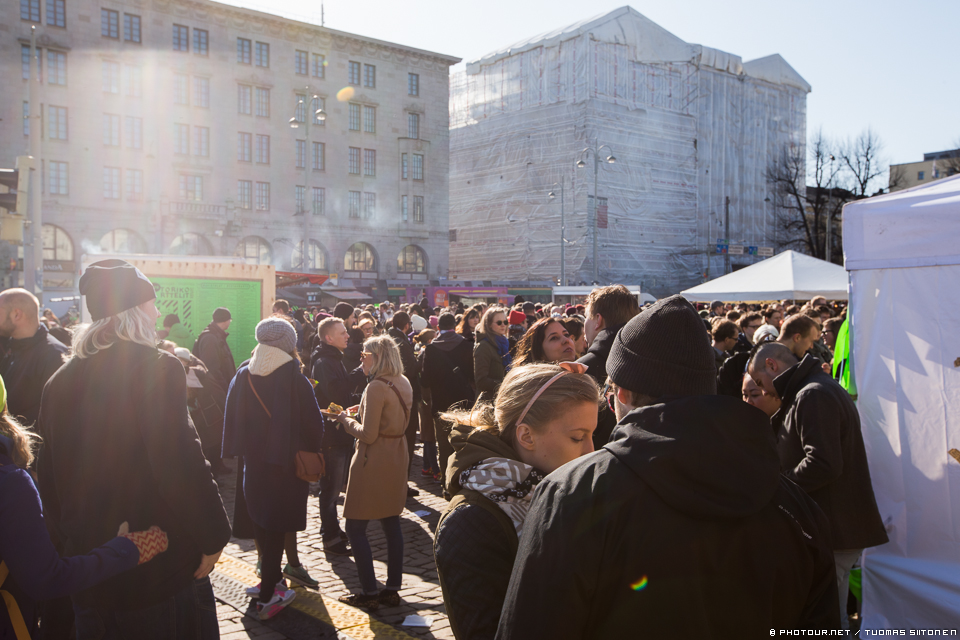 Kauppatori was extremely packed with people. There were estimatedly tens of thousands of people, which is amazing, especially when considering the low population of Finland (5 mil). 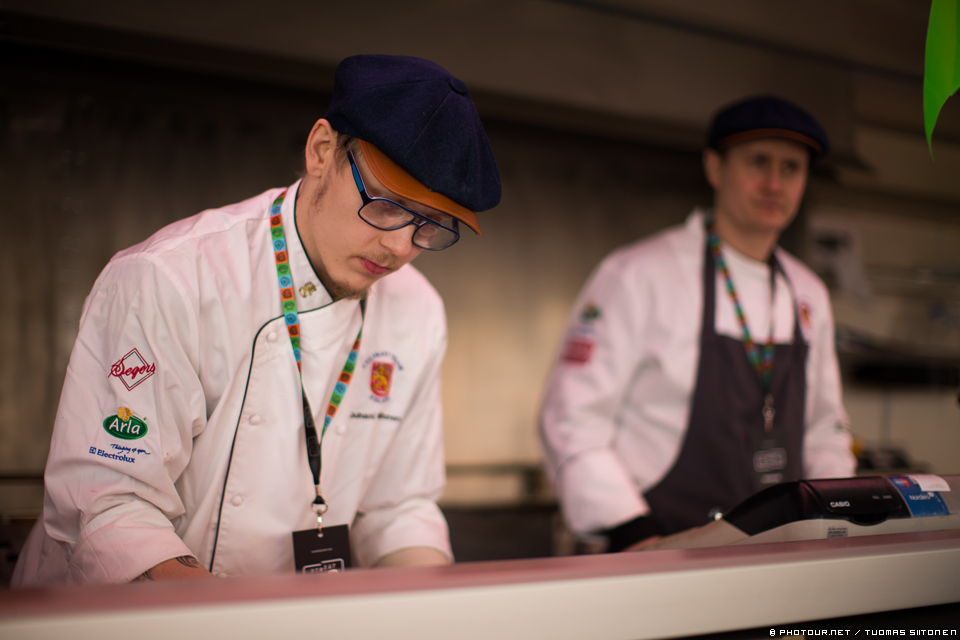 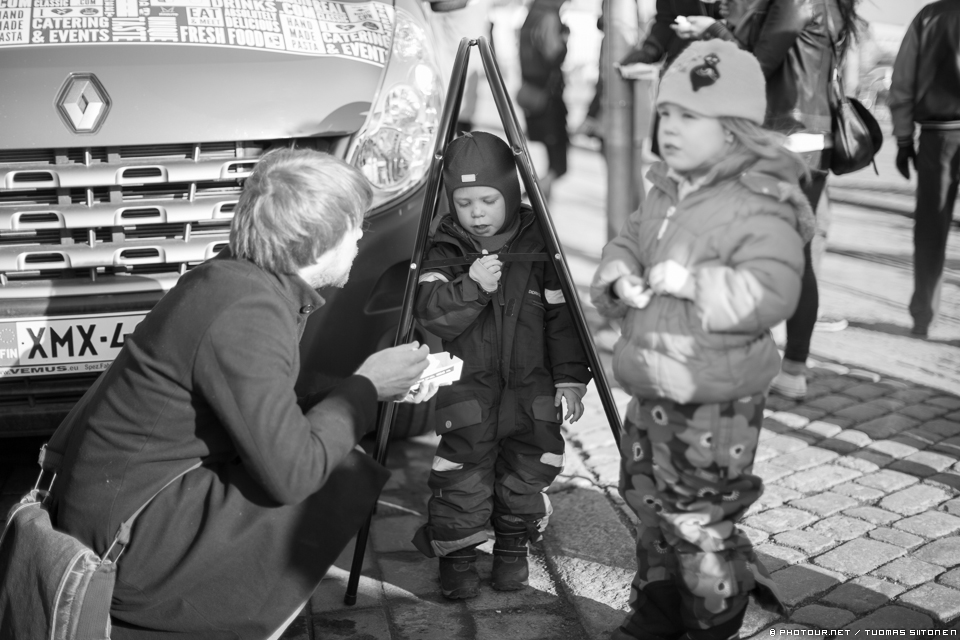 A father feeding his child, who sought cover under a signboard. 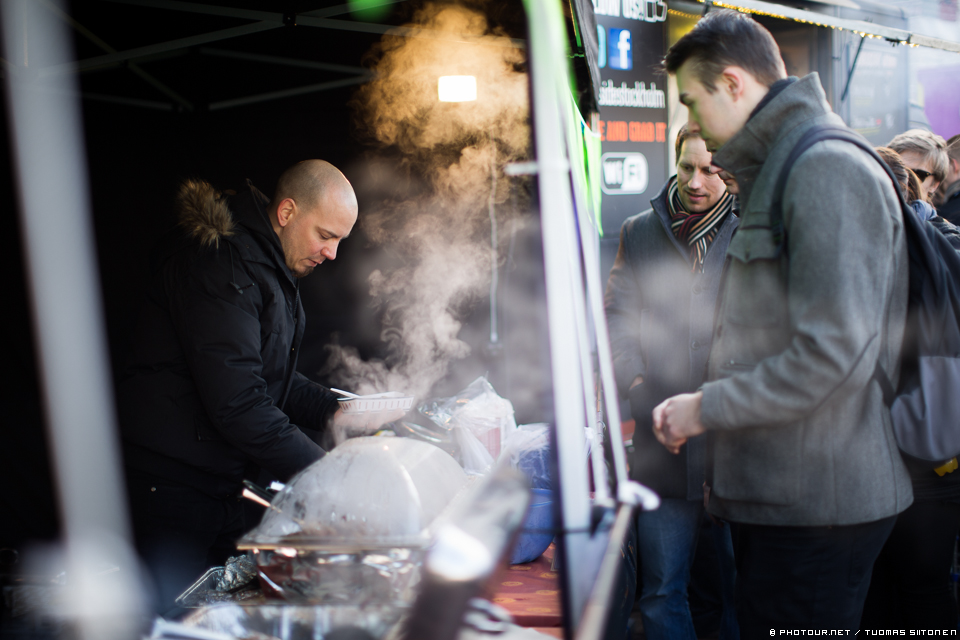 A salesman of Texas BBQ offering a meal to a customer. 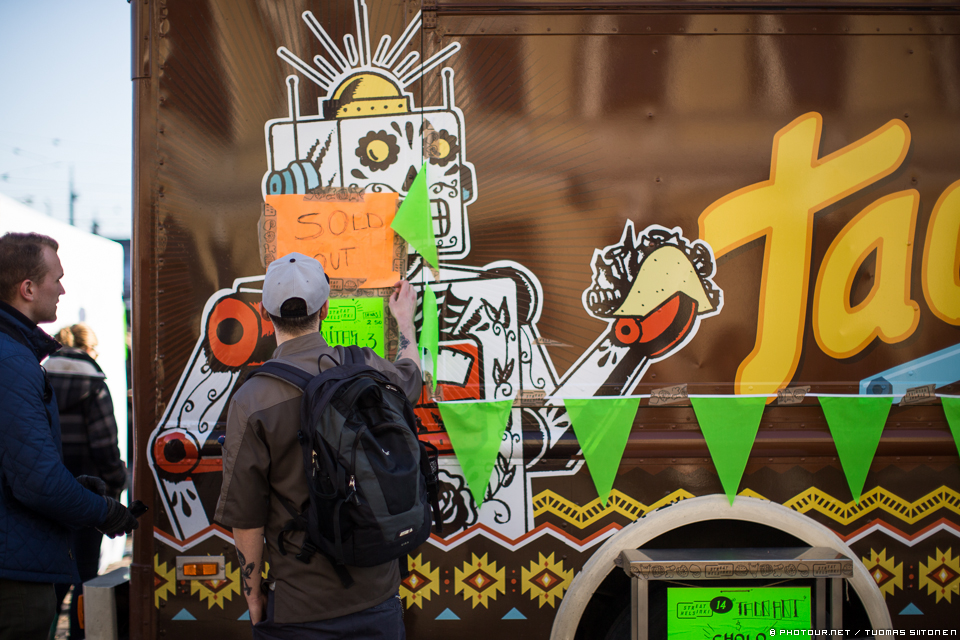 Even before 4 PM, third of the booths had sold out, lengthening the already too long lines of other booths.