Traveling is something I do way too infrequently. Whenever there’d be a chance to travel, I usually invest the funds in photography gear or similar subjects. Albeit I usually tend to think that the journey is more important than the destination, traveling by plane does not count – it’s just tedious and boring with its unnecessary bureaucracy and needlessly long waiting times at airports. Nevertheless, it’s wonderful to have a chance to charge your inspiration, to drain new ideas from new areas.

London – especially its centre – is always on the move and something is happening, and that, as a photographer, really intrigues me. If you can’t sleep at night, you can just take a walk outside and you’re guaranteed to find subjects and situations to capture. Surely this can be said for every major city, but there’s just something in London that attracts me to return. Perhaps it’s the relatively short flight from Finland, perhaps that I can understand the locals’ language.

The trip’s purpose was mainly leisure, but being me, enjoying it would’ve been completely in vain had I not dragged my camera with me – everywhere. It’s surprising how easily you can hide your bulky 1D X and remain unnoticed while doing street photography. I’ve been really getting into Lowepro’s ProTactic 450 AW (seriously, how unnecessary that name is for a backpack…) and thus I dragged it with me. Review coming soonish. Perhaps. Maybe.

I do recognize that the places and situations were mostly not unique – besides the Je suis Charlie protest – and could’ve, and probably already have, been shot with a slightly different angle, but that’s part of the challenge; finding unique moments in what is seemingly everyday for locals and focusing in those brief moments. 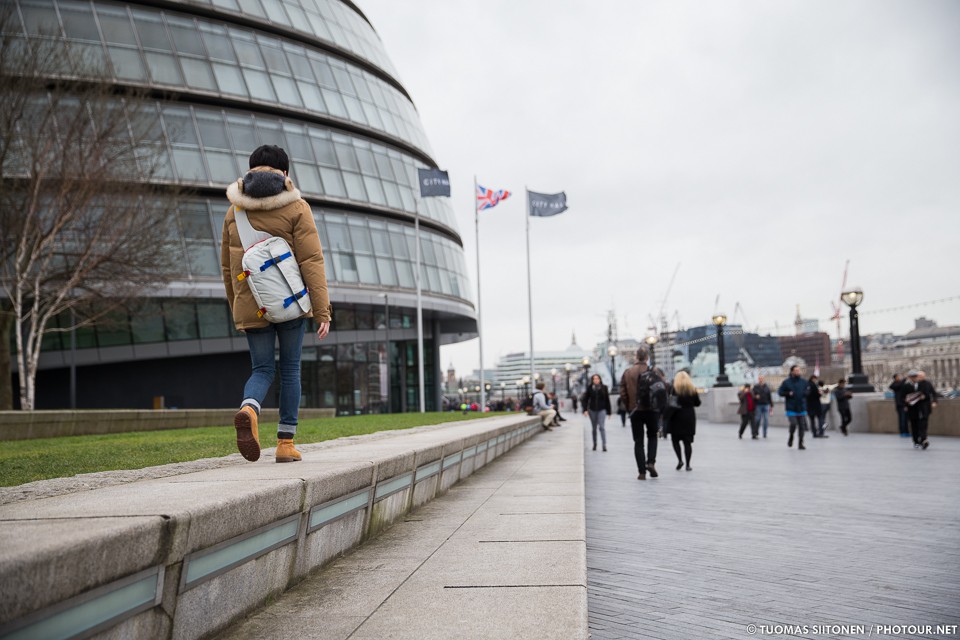 A tourist walks beneath the City Hall and Thames. 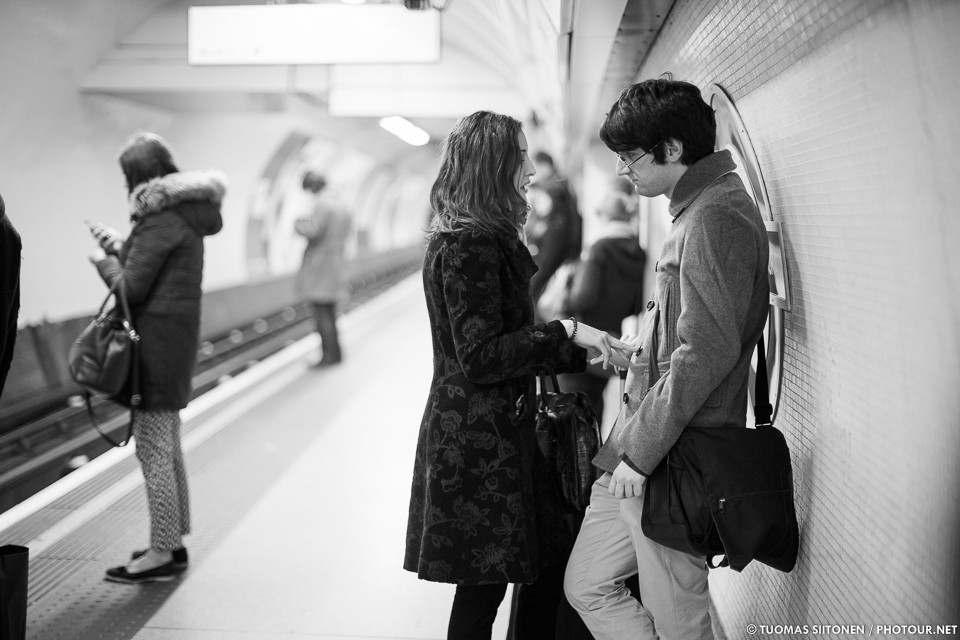 Couple having a deep discussion in the underground. The nature of the discussion remained unclear; was it a happy or a sad one? 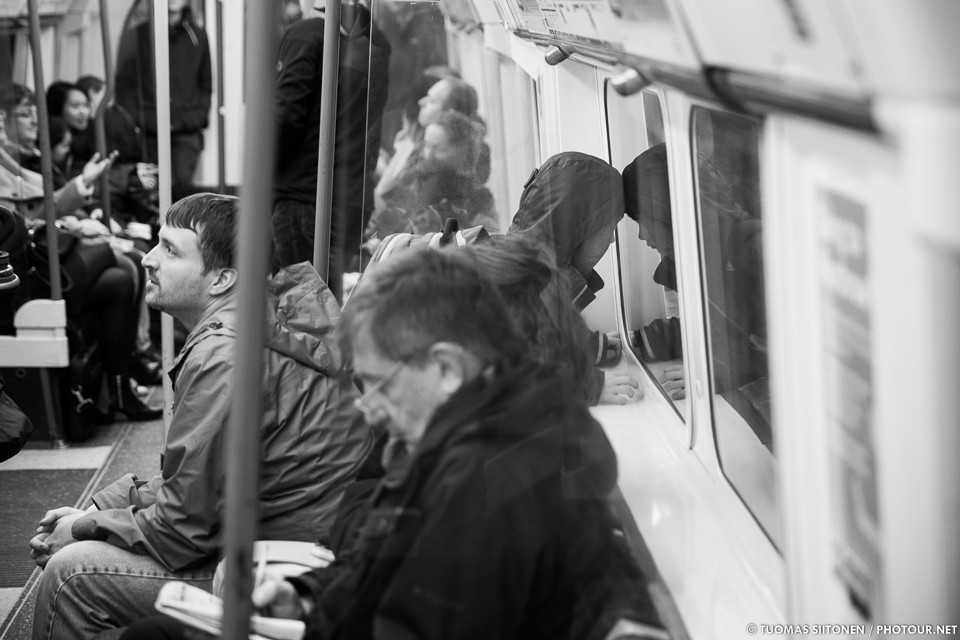 Child watches through the underground train’s window, trying to spot anything from the darkness. 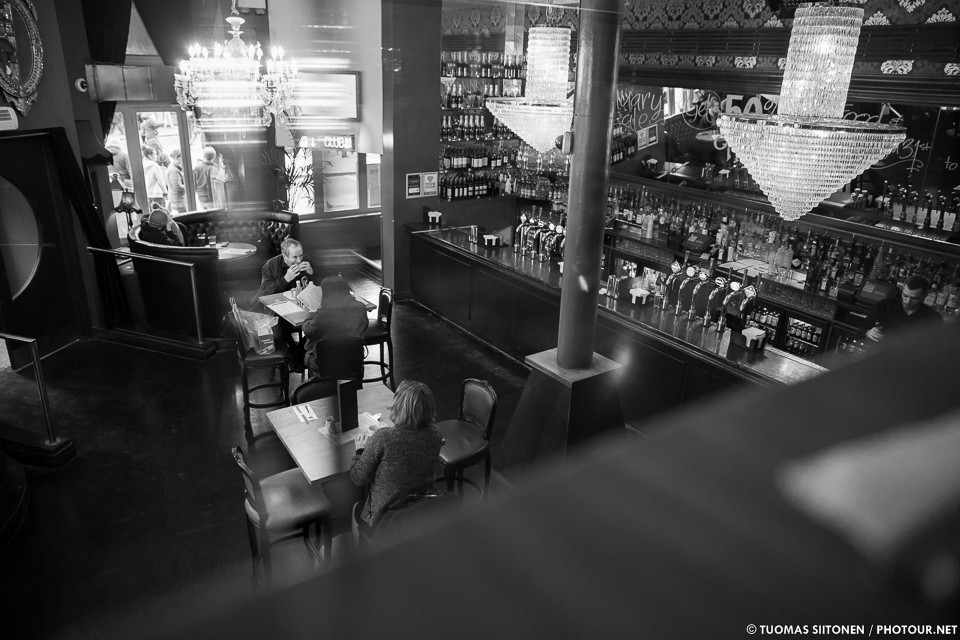 Man eating his lunch in a pub at Covent Garden. 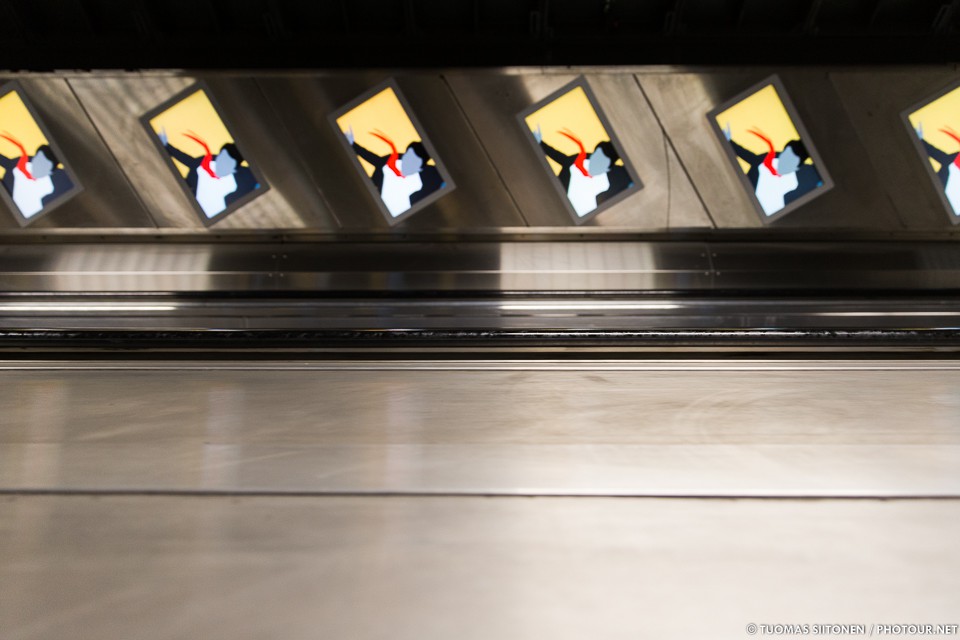 A little patience doesn’t hurt, as the advertisement for underground safety was displayed on the monitors. 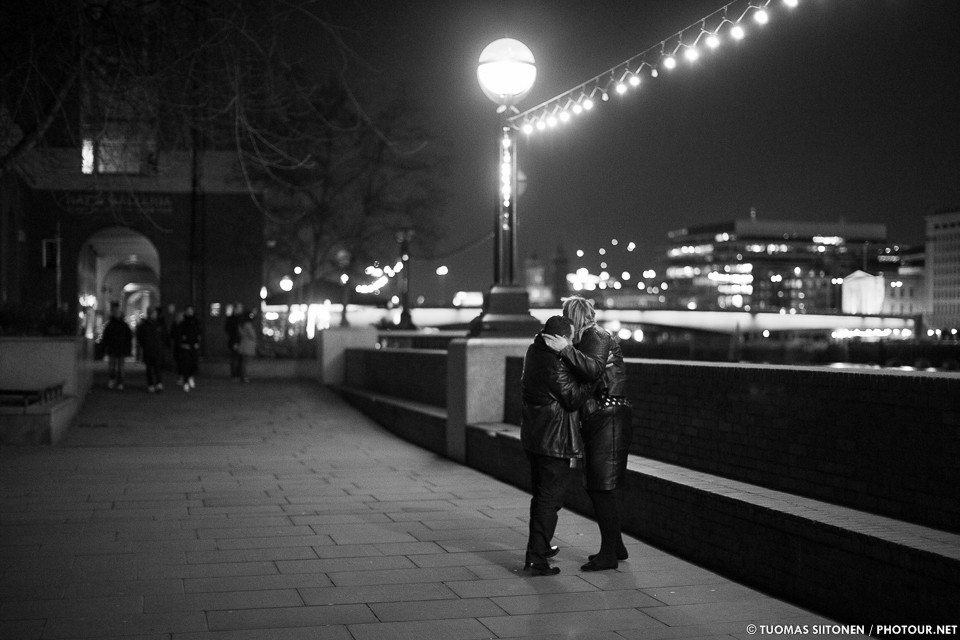 A somewhat intoxicated couple having a moment between the London bridge and Tower bridge, by Thames. 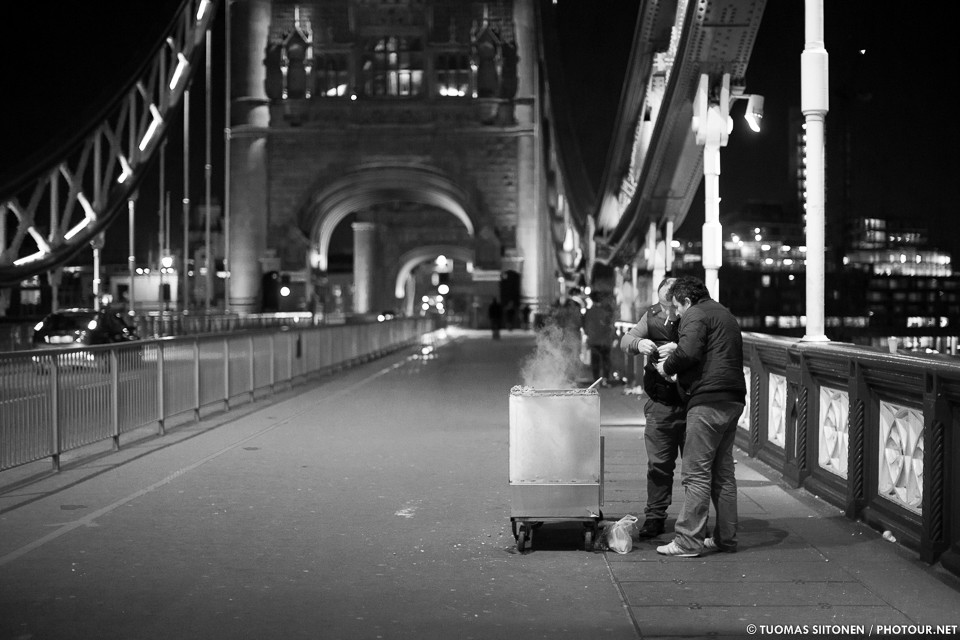 Men selling roasted chestnuts lighting cigarettes for each other. 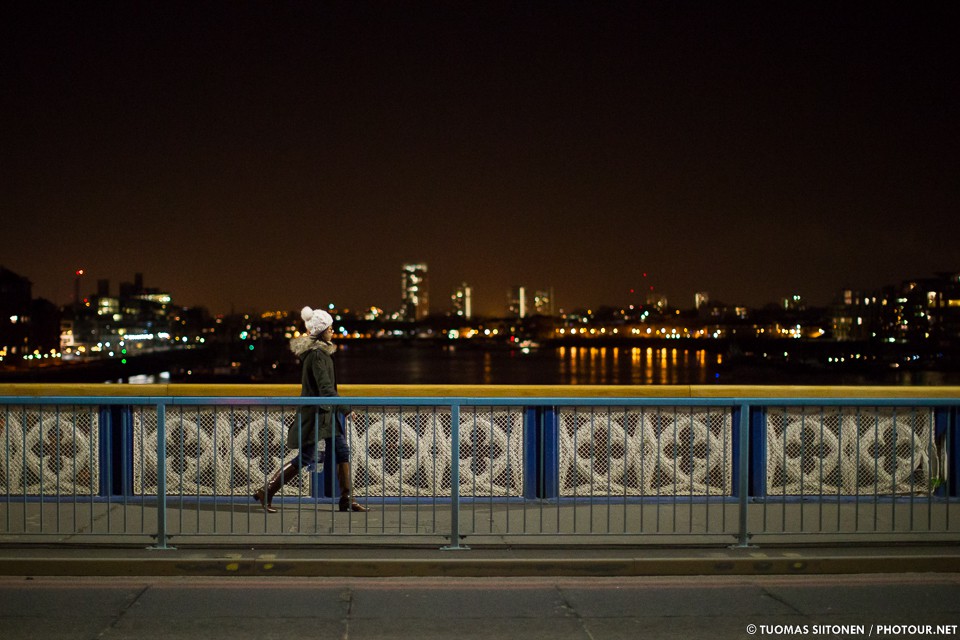 Girl passing the Tower bridge, whilst eastern London is reflected on the Thames on background. 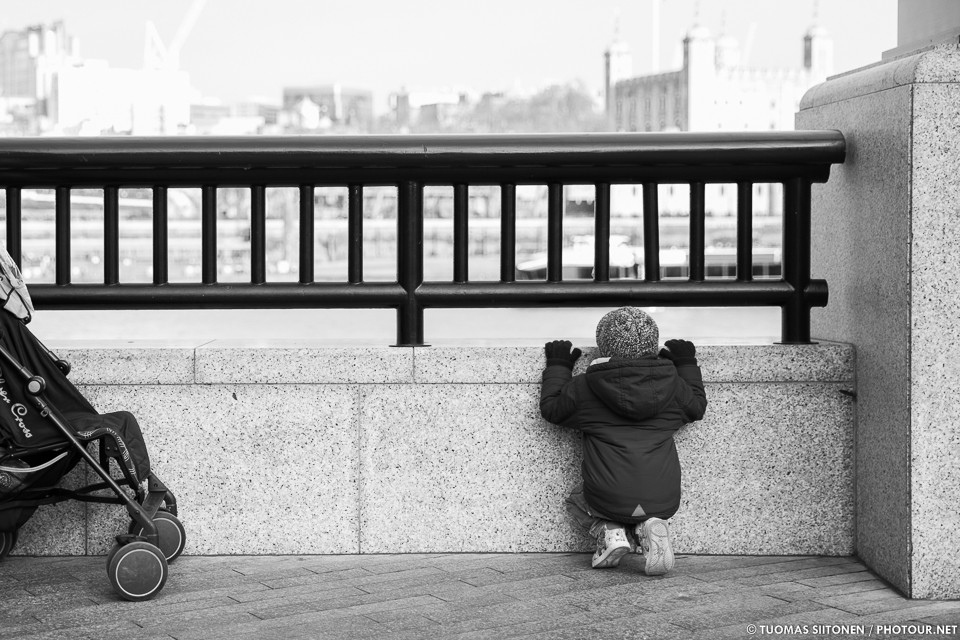 Child peeks beneath the handrail to see the Tower of London across the Thames river. 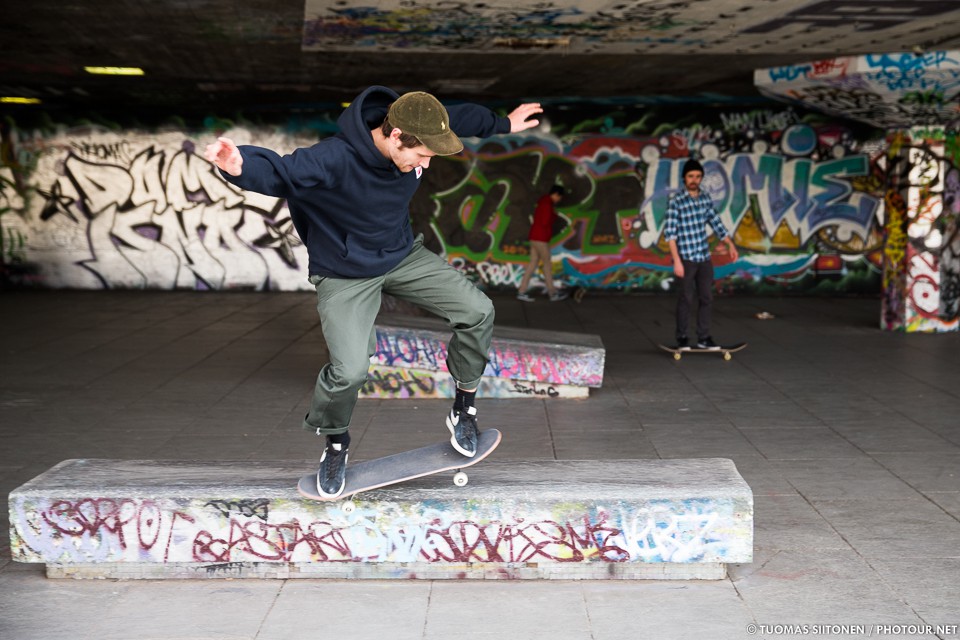 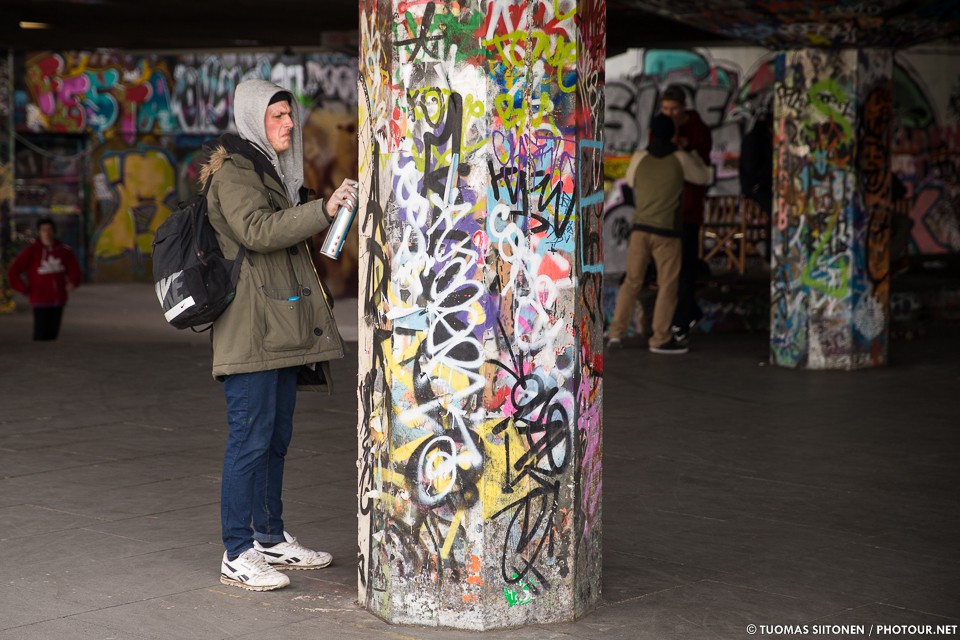 A man seems generally unpleased whilst tagging with spraypaint. 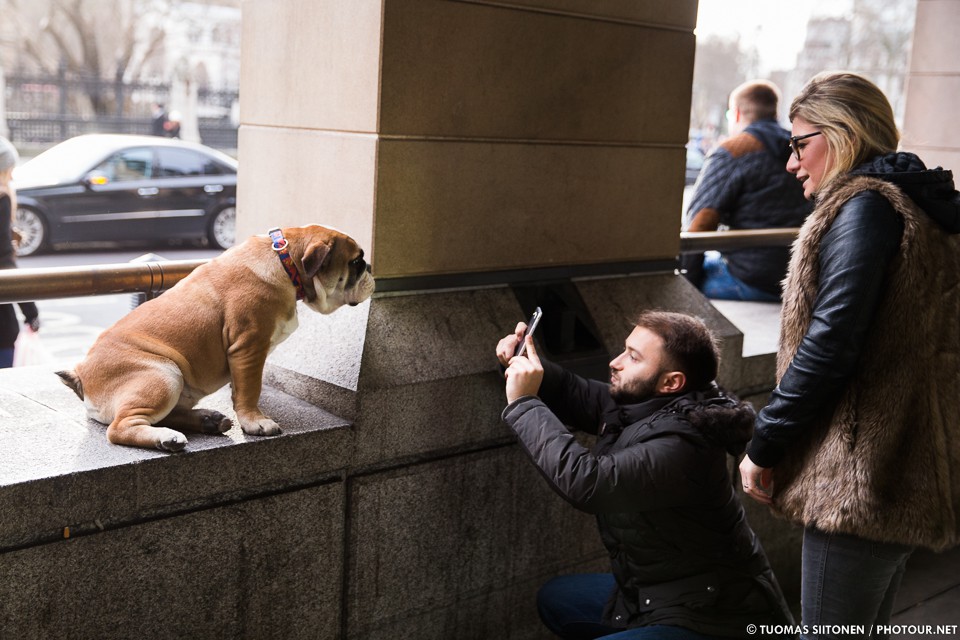 Man takes a staged photo of a bulldog by the Parliament House, right at the Waterloo underground station exit. 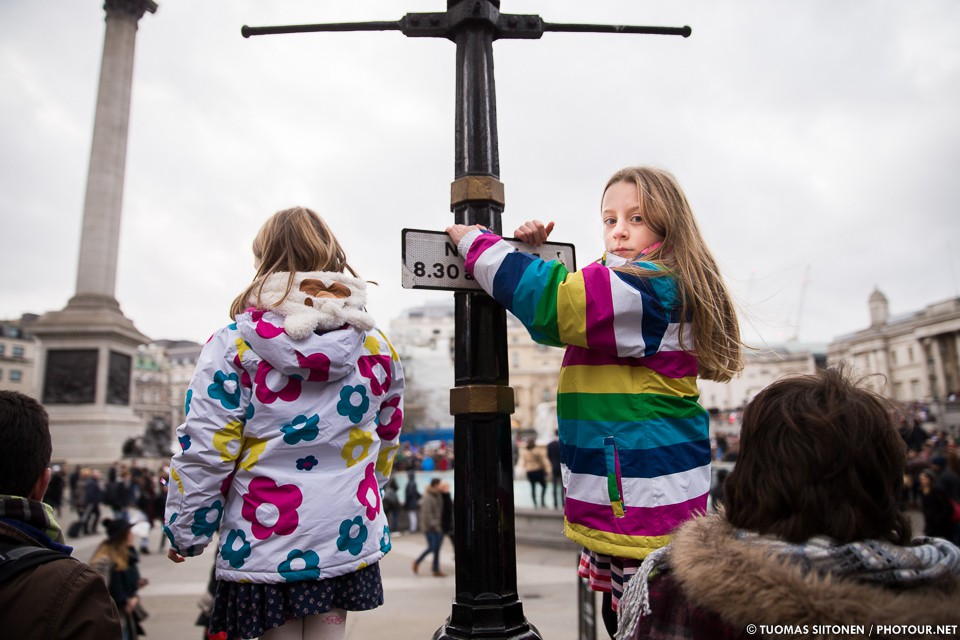 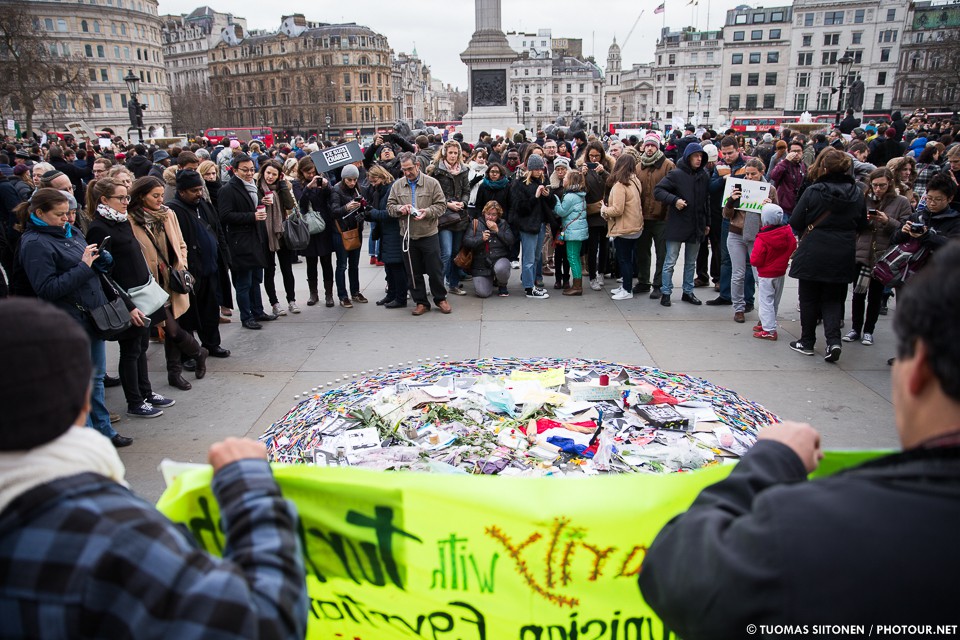 Two men held up a banner next to pencils, flowers, notebooks and posters being presented as a protest for the shooting at the Charlie Hebdo magazine. 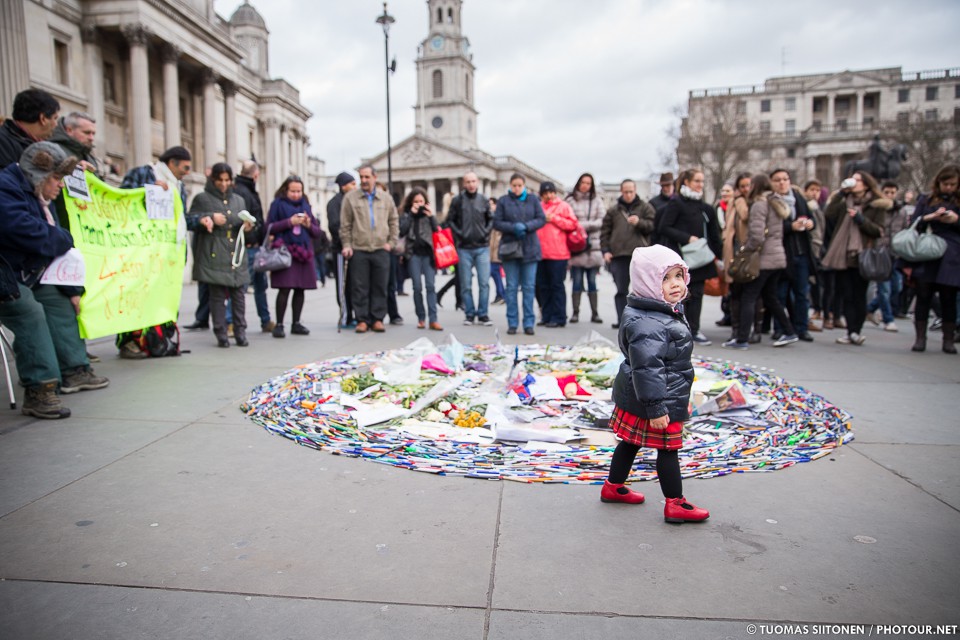 A child looks towards her parents by the memorial of Charlie Hebdo newspaper shootings. 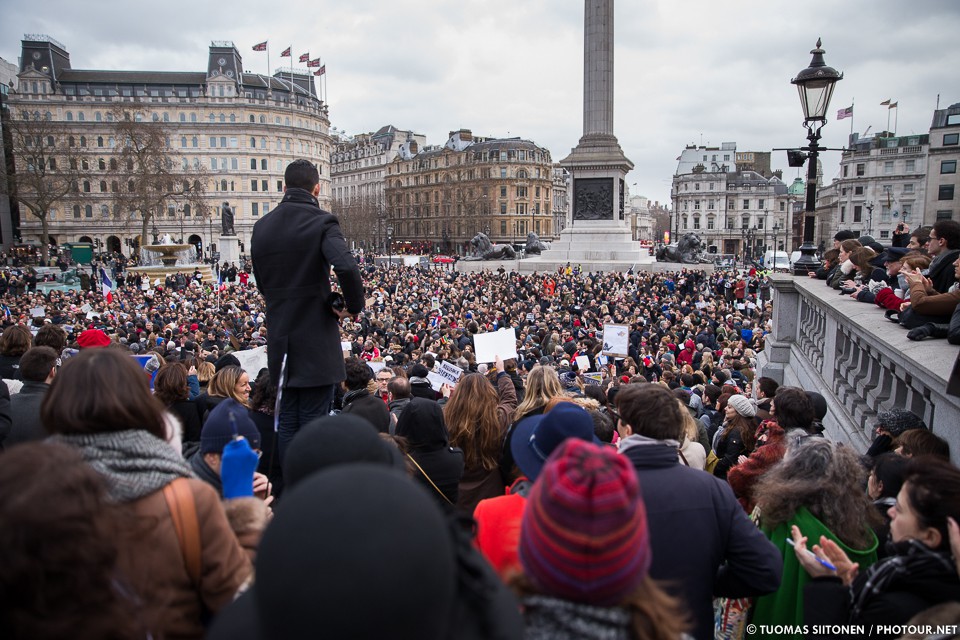 The Trafalgar Square was filled with people applauding. The protest was extremely calm and people seemed peaceful and curious. 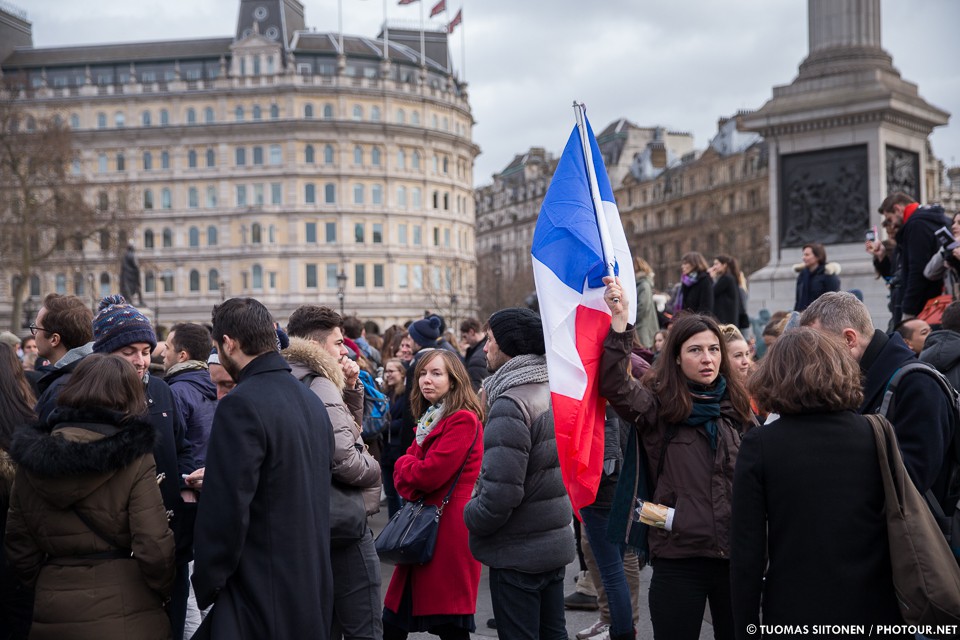 A woman holds up the flag of France. 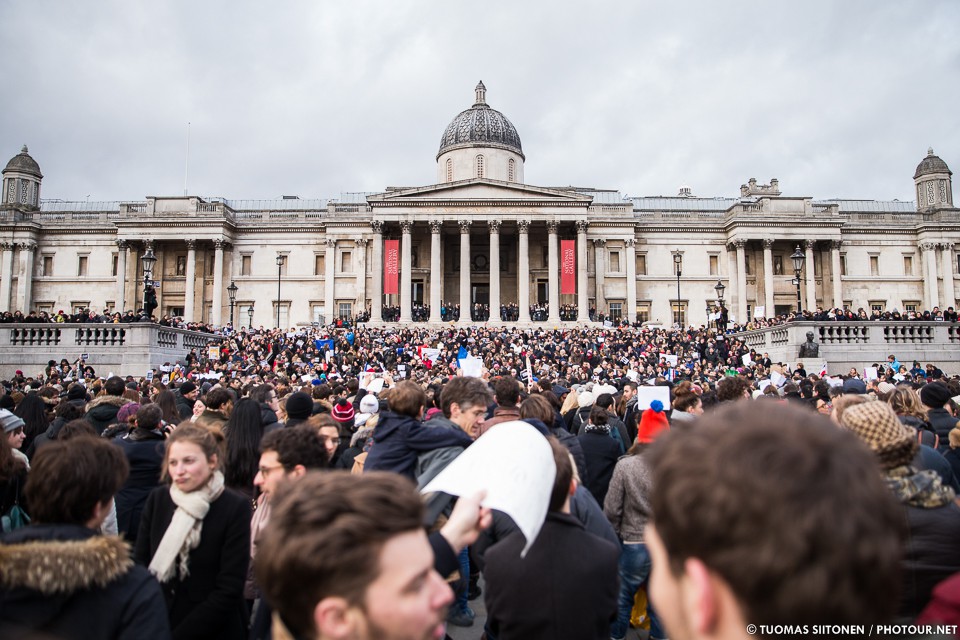 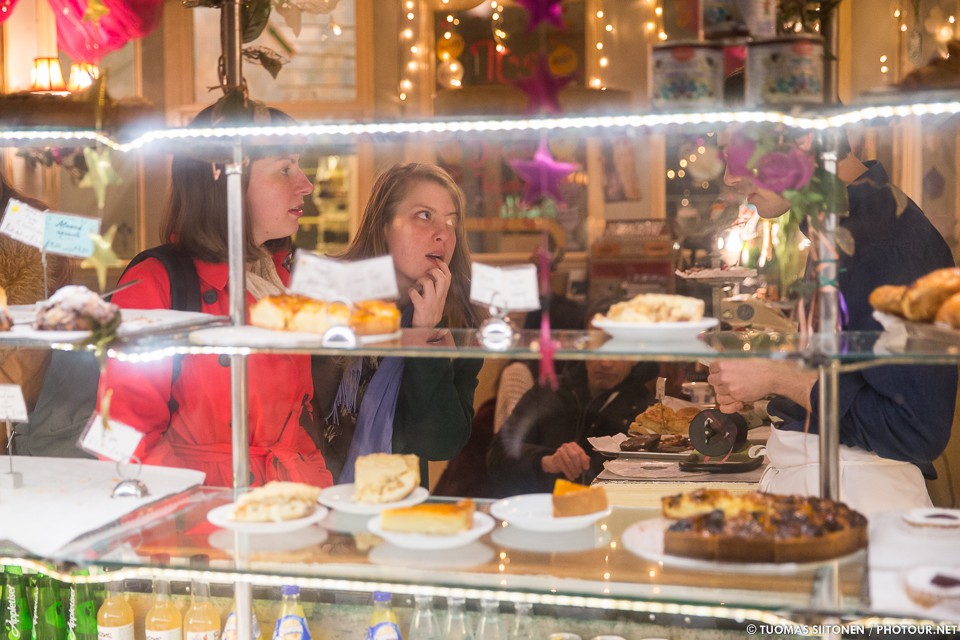 Two girls having a hard time deciding what to have in a café-bakery in Soho. 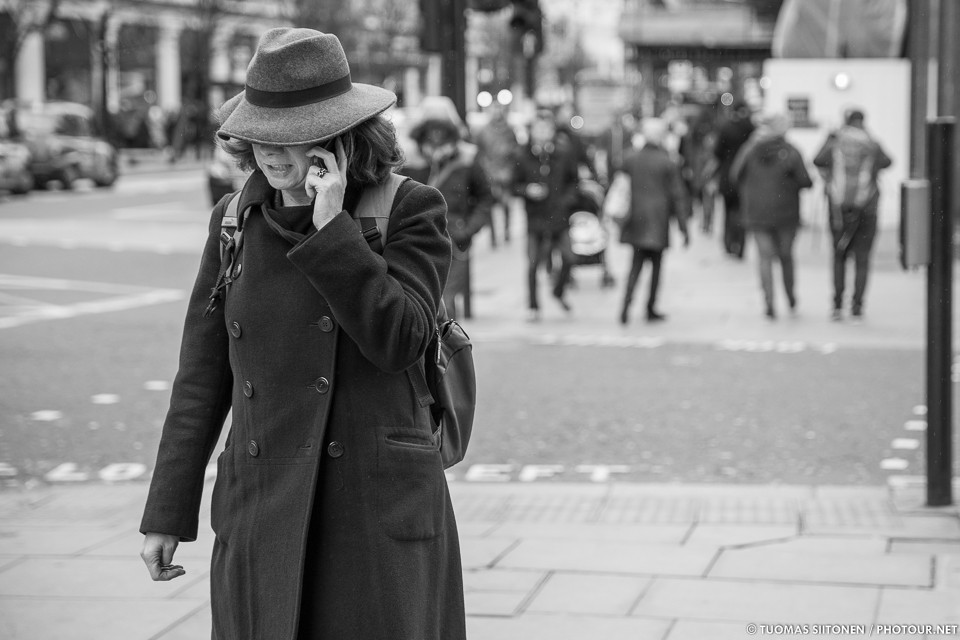 A mysterious woman talks into her cellphone on Oxford Street. 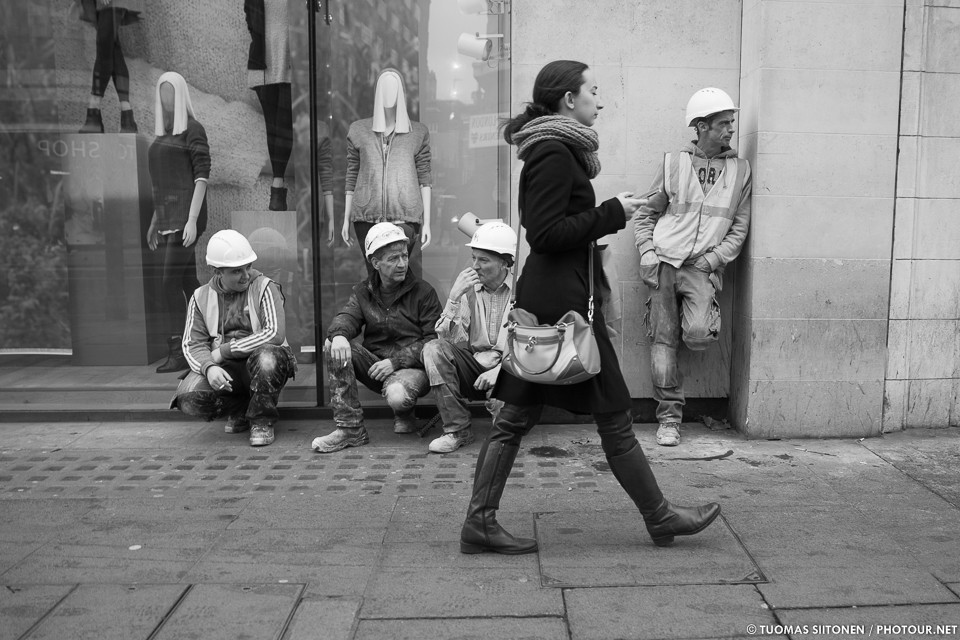 A woman walks past some construction workers on Oxford Street. 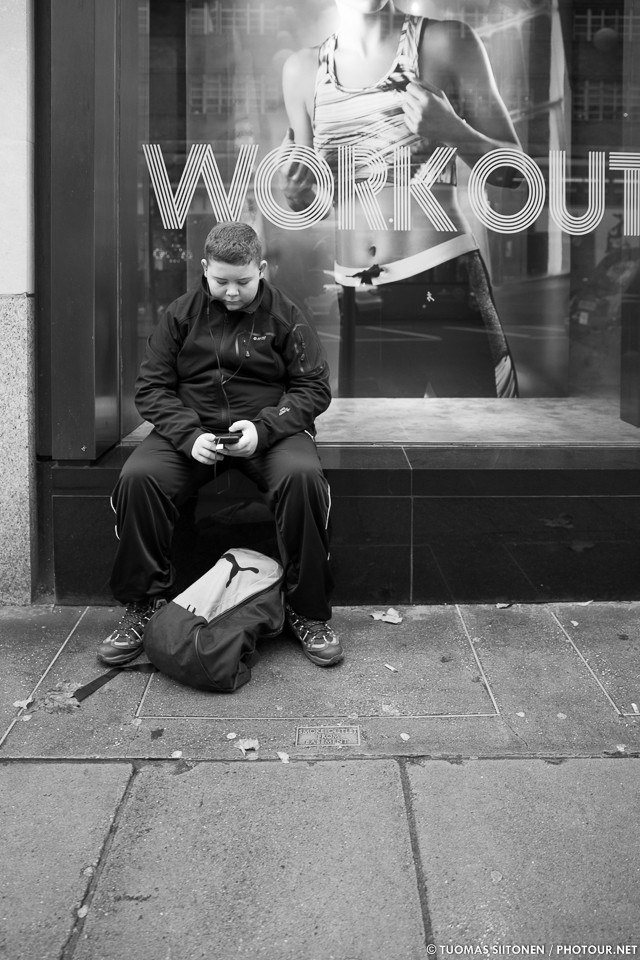 Young man sits in front of a showcase while waiting for the drizzle to stop.