I don’t care what anybody says; as of March, it’s now officially spring in Finland.

And what could be a more spring-like activity than riding around for fun with a wonderful car?

That’s what Patrik did. I joined him as shotgun and travelled among the narrow and curly roads of Middle and Eastern Uusimaa. The vehicle in question is a tad different from the classic definition of car, though, as it is in fact a goddamn army truck.

The vehicle, Scania SBA 111, is a Swedish army surplus truck, built in 1976 by Saab-Scania. This 9000-kilogram beast gets its torque from an 11-litre diesel engine.

In 2013 Patrik flew into Sweden to “check out” the choice of vehicles available, but then couldn’t resist the urge, and straight away bought and drove the new member of the family home to Finland.

After wading through the deep sea of Finnish bureaucracy, Scania was ready.

As we circled around the vernal roads, Patrik sat me into the wheel of the truck.

It’s been a while since I’ve driven a car this big – six years to be exact – and dear god how I had missed it. You could see miles ahead, above the puny, little sedans’ roofs. Well okay, there weren’t that many sedans around. More like one on the upcoming lane every now and then. Nor could I see miles ahead.

But I could see over their roof, and that’s what matters.

I want a goddamn army truck, too! 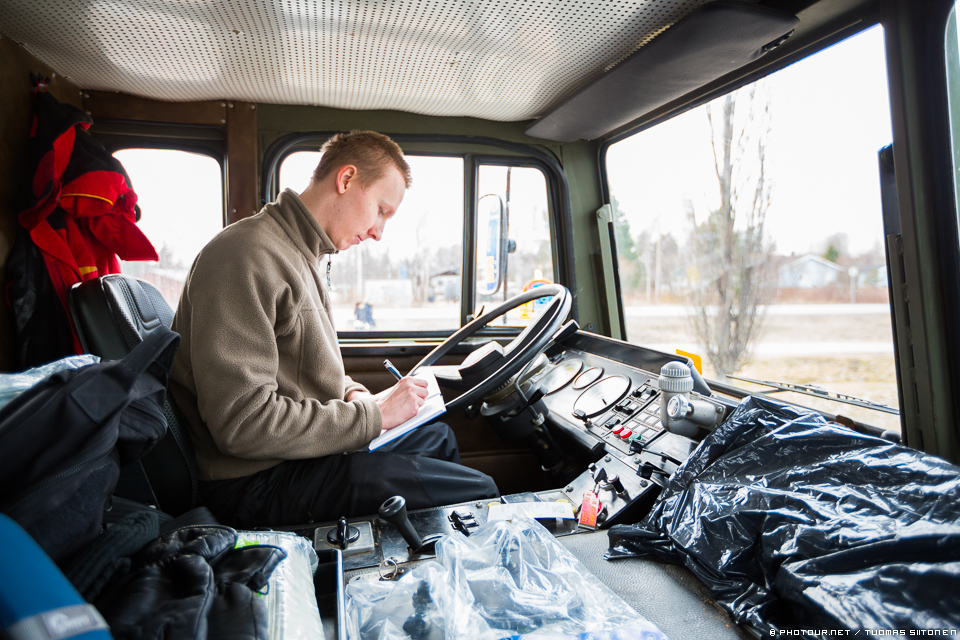 Patrik keeps a precise log of his fuelling amounts and mileage. The Scania consumes from 30 to 40 litres of diesel in 100 kilometres, of course depending on the driving style, be it driving in a city, roaming the highways or going through bushes and fields. 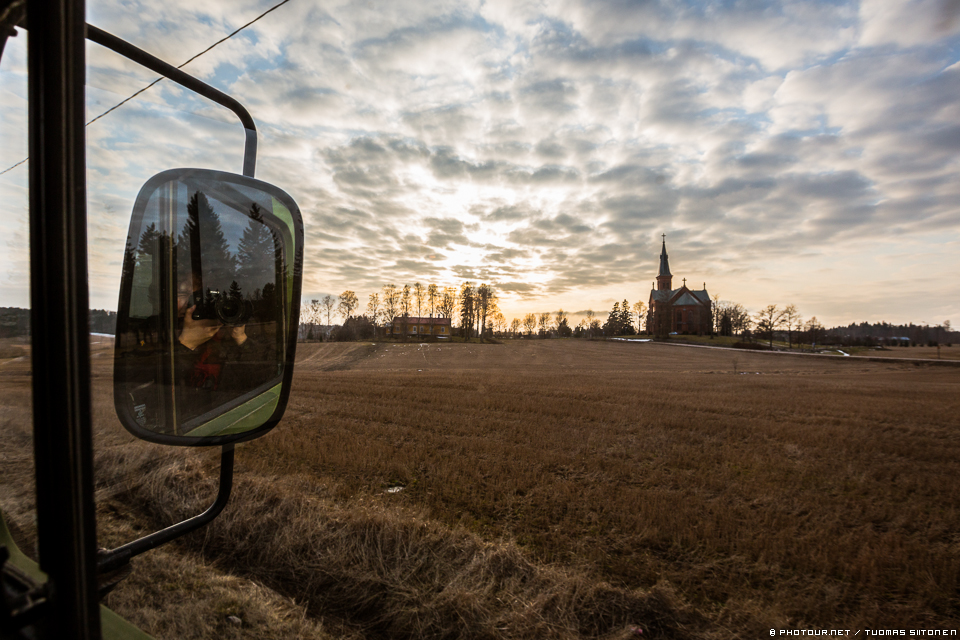 A sufficiently discreet selfie taken from a road called Bröbölentie. Yeah, it sounds ridiculous in Finnish, too. Blame the Swedes, as Sipoo is mainly a Swedish-speaking municipality. 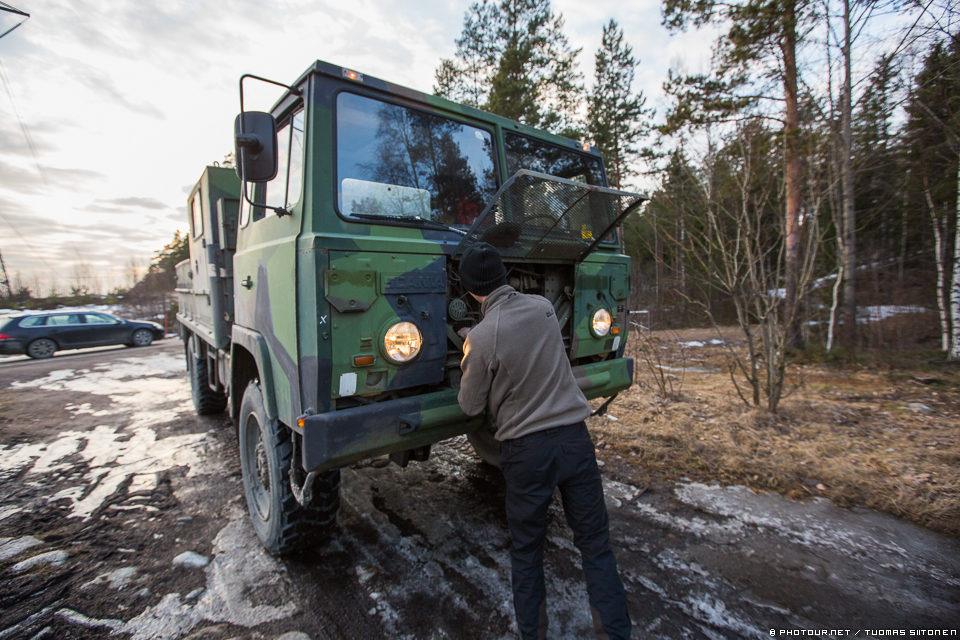 Every vehicle needs a bit of maintenance to work properly. After driving a while, Patrik decided to ensure that the lately changed gear oil levels were correct. 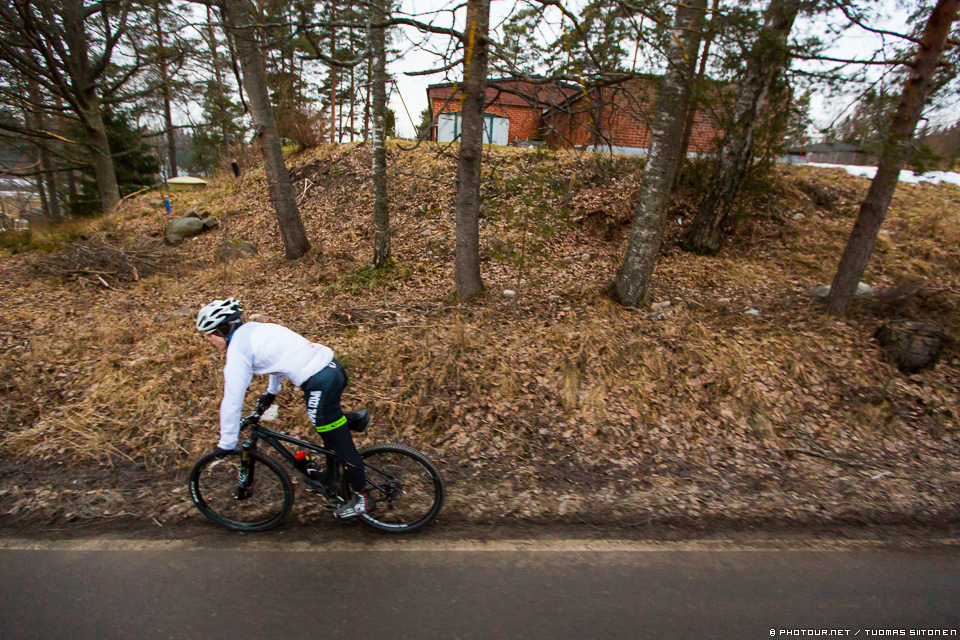 This cyclist had obviously cycled on the verges of narrow roads before; he didn’t even bother to peek when we bypassed him – with a safe distance, of course. I haven’t yet decided whether cyclists like him are brave or foolhardy. Probably the latter. 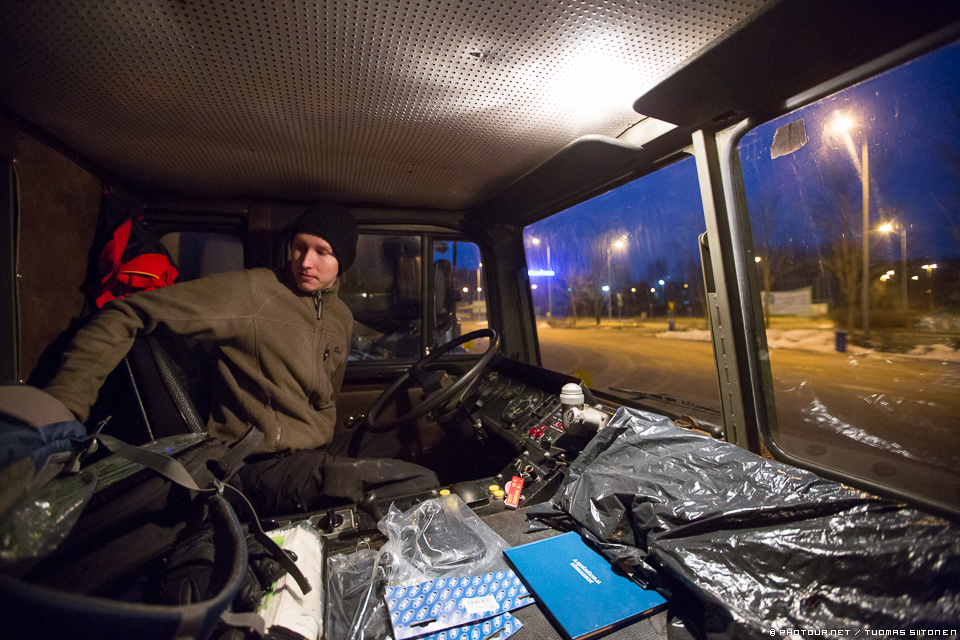 Even though the weather was vernal and mostly warm, it still was not summer yet. We stopped to have dinner on a truck stop with proper parking space for a moderately sized truck such as the Scania. Whilst eating, darkness had arrived. 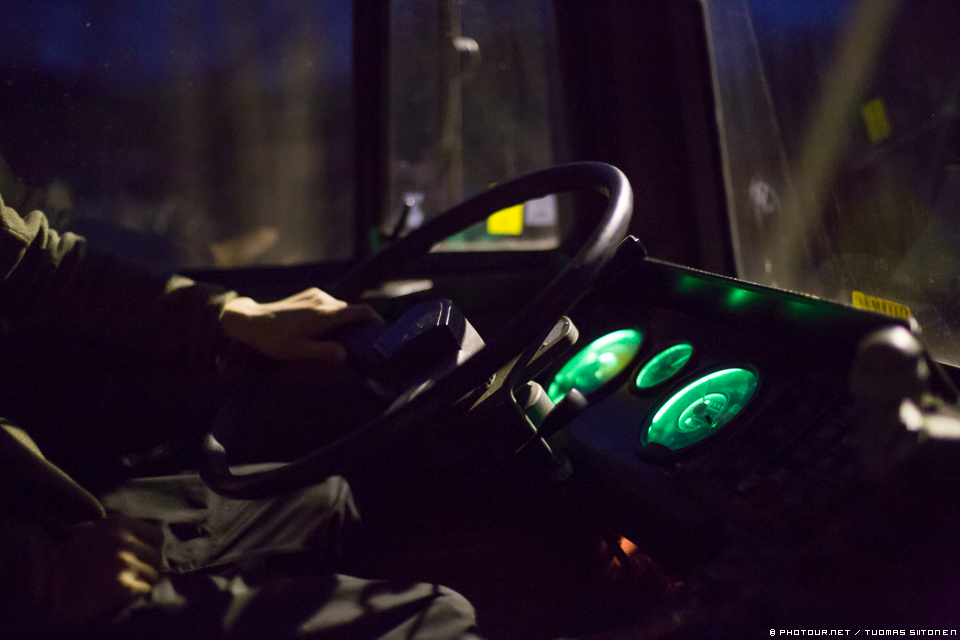 There were only a few low-powered street lights on our route which didn’t really light up anything besides the grey and boring asphalt road. Turning the cabin light on was not an option, as it was rather powerful and the driver wouldn’t have been able to see the road. 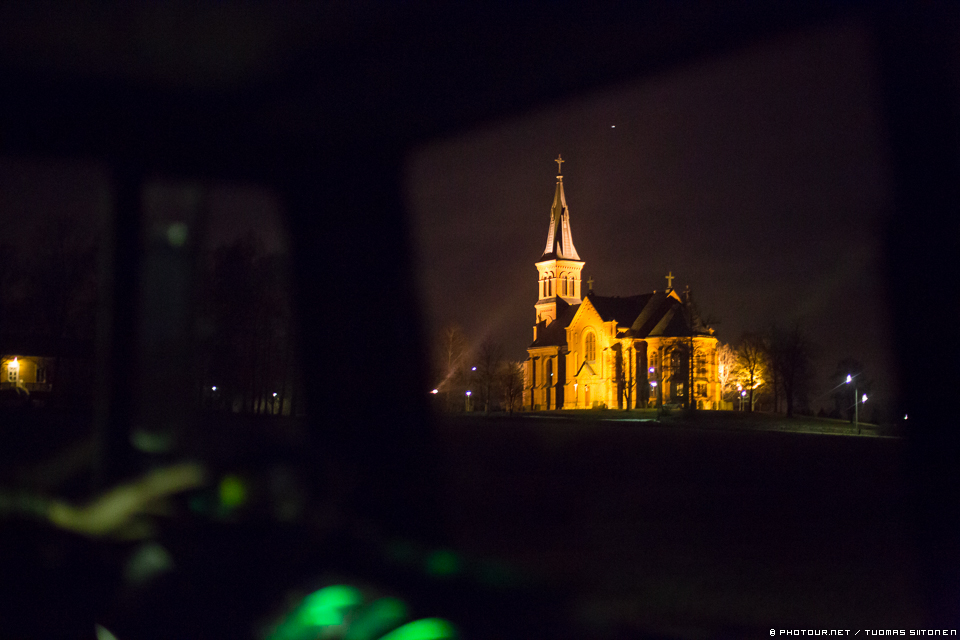 Our route took us back nearby of Sipoo’s church, via the silly-named road of Bröbölentie. 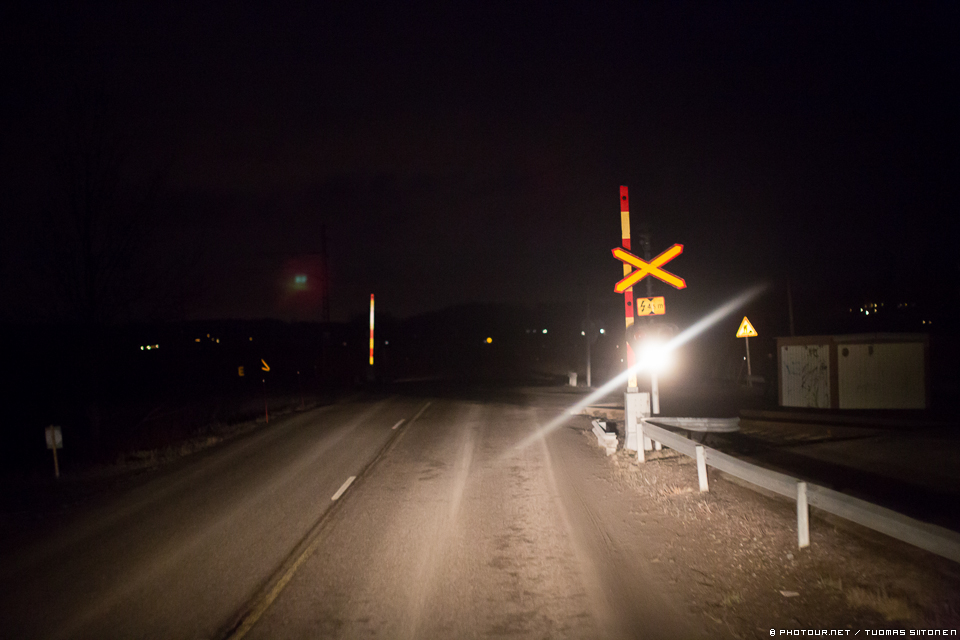 Eventually we found ourselves crossing the Kerava-Porvoo railway track, which is only used for industrial purposes, e.g. moving oil and chemicals from and to Porvoo’s industrial zones. I didn’t even know it existed until I saw it. 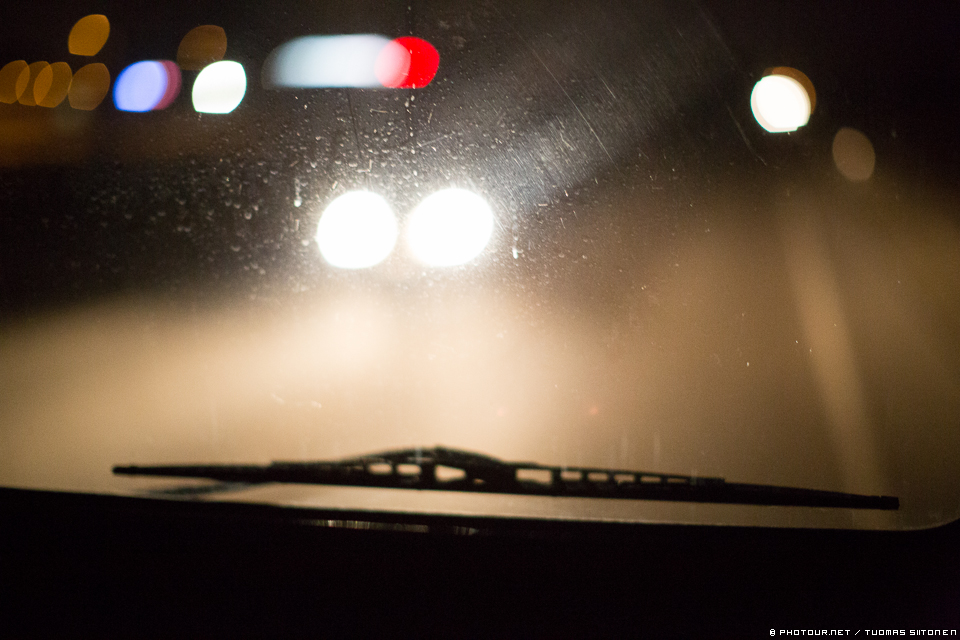 It was rather odd to notice that when facing a truck as big as Scania, people tend to forget turning their high-beam lights off. It could’ve been a coincidence, or perhaps even a gathering of jerk drivers, but perhaps it’s neither – maybe people think that somehow magically truck drivers are immune to high-powered lights.

With empirical observation I can tell you that they’re not. Even when the cockpit is located a bit higher than on regular cars, high-beam lights still reach there and induce a real danger to everyone on the road. A blind man can’t drive properly. 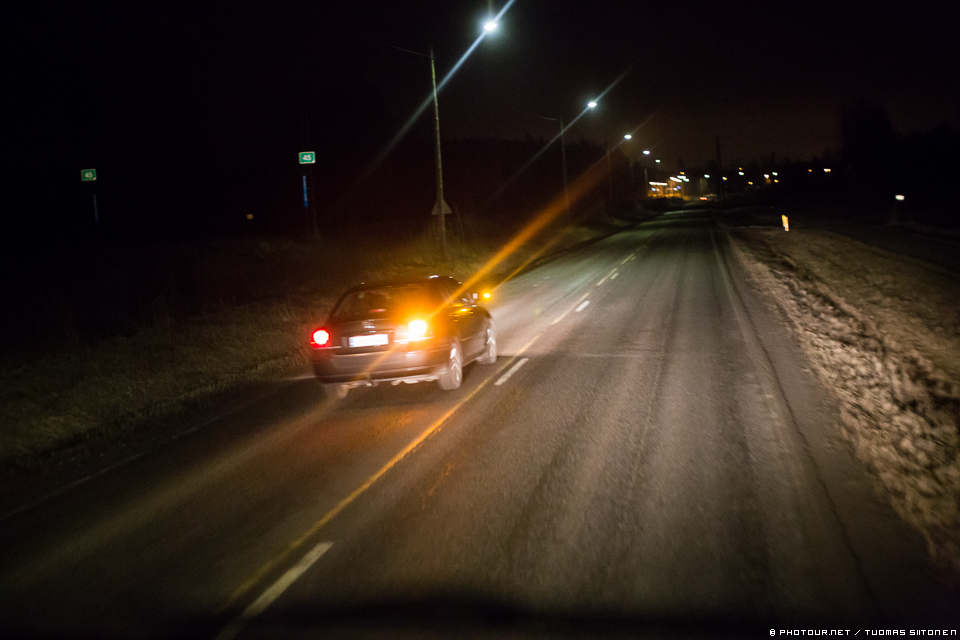 Trucks in Finland are allowed only to drive 80 kilometres per hour, thus some drivers tend to get a bit impatient. If it’s safe, feel free to overtake. We’re not going anywhere any faster. Unless we were to fall. From a cliff. 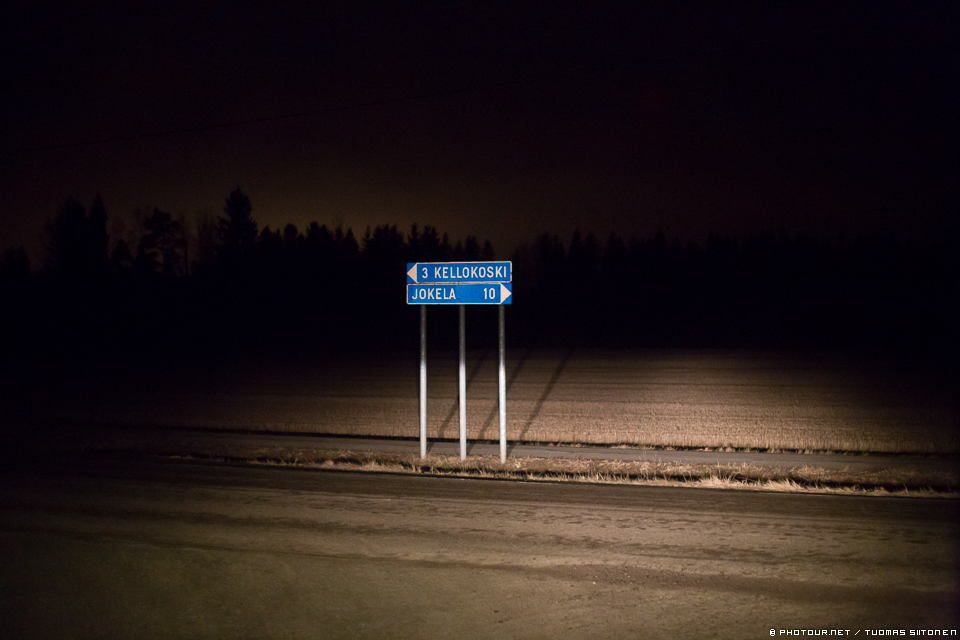 We were almost home, but not completely. There was a bit of time and we felt it was necessary to take a detour home. Via Jokela.

And so we did.