Few days ago I changed my trusty Canon 5D Mark III to its big brother, 1D X. To some, it might seem almost insane to change an extremely good camera to a statistically slightly better one, which costs and weighs the double. And that’s a completely valid point. But why would anyone do that?

First off, these are empirically observed points that do not really hold much when requiring something measurable. I’ve used both 5D3 and 1D X on multiple occasions before and I base all of my opinions on practical use in journalism, planned photoshoots and event photography.

5D3 really is a wonderful camera and its image quality is superb, empirically perhaps even better than 1D X’s due to 5D3’s extra resolution, 18 megapixels versus 22. The difference isn’t huge, but it’s there.

The need for a “better” camera comes from the way I use my gear, as professional tools on a daily basis. Whilst 5D3’s build quality is good and better than many of those that are on the market, it’s not still enough for me. Admittedly, I’m a demanding user, as I drag my camera around by Blackrapid’s RS-5 Cargo Strap which is bliss when you’re constantly on the move e.g. at an event, ready to take a photo when it’s needed. And that really shows, as the bottom of 5D started losing its paint.

When I first noticed this, it was already too late. My only choice was to wrap the bottom of the body in gaffer’s tape to prevent further peeling of the paint. A thorough google search revealed to me that some of other 5D3’s owners had experienced the same problem, but these cases seemed to be rather rare. I also enquired this from Canon Professional Services, whom told me that they’ve heard of few, rare cases that seem to happen when the photographer wears some specific combinations of clothing fabric and a camera strap. CPS assured me that it’s nothing but a visual problem; the body won’t suffer from being exposed to elements. 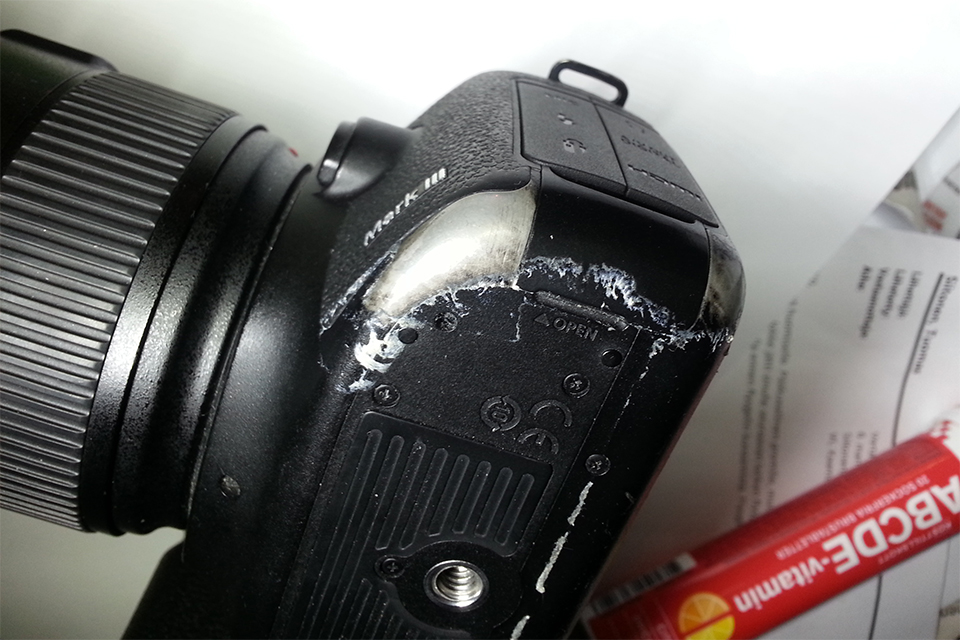 The white residue on the camera is from the gaffer’s tape that covered the bottom.

As my 5D3 was bought back in 2012 on the same week as it was released, JAS Tekniikka, the Finnish warranty service for Canon, told that according to the state of the camera, the wear is most likely due to regular wear in use. As it is; you can see above how even the rubber grip has faded slightly away from the corner. To repair it would’ve only cost 270 euros with the work included, but obviously this wasn’t the only reason I upgraded my gear.

Figuratively speaking, 1D X is built like a tank, whereas 5D3 is “merely” an armoured truck. As someone who started the never-ending journey of photography with a trusty old Canon’s F-1 from the 80s, that feeling of a sturdy hunk of metal that endures the tasks that it’s required to do is just something you’ll always crave after. 5D3 was close, but not just quite there. 1D X is just simply better. 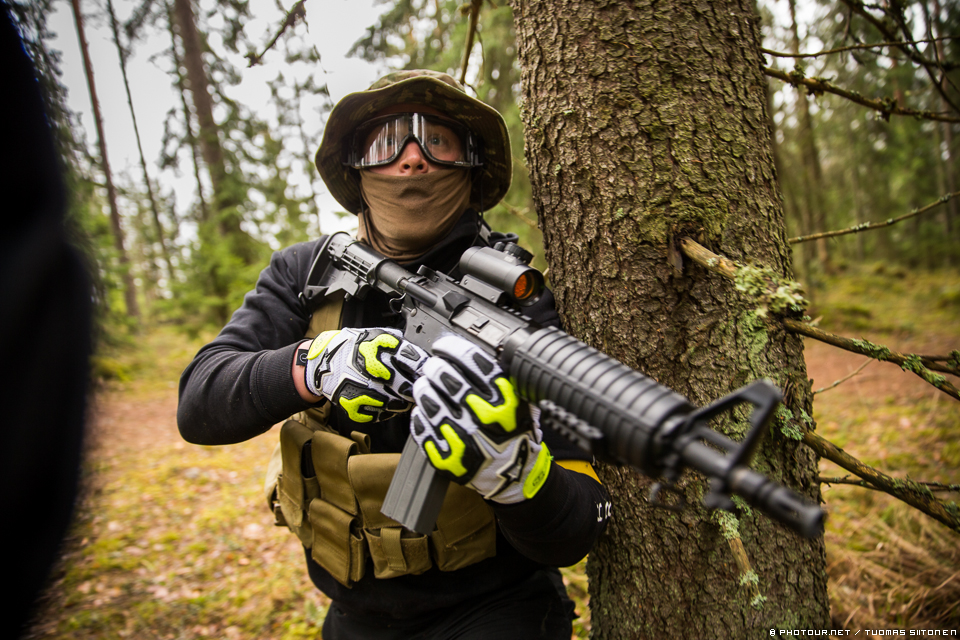 5D3’s focusing system is great and at first glance it’s almost as good as 1D X’s is with 61 focusing points. At second glance it’s still as good, to be honest. But when you’re in extreme conditions, e.g. photographing camouflaged people running in a forest, 1D X works like a charm. It’s a tool that delivers exactly the sharp images you would expect.

When targets aren’t running, they focus perfectly fine with 5D3. When they are, 1D X is simply a better tool to obtain more sharp photos. Both are excellent for low-light photography and 1D X is only slightly better than 5D3.

But then comes the question of how fast a camera takes the photo when you press the shutter. Whilst 5D3 is quick, 1D X is faster – transitioning in between the cameras, in example whilst using two bodies, really messes up with how you predict your timings, as 5D3 is noticeably lazier.

I’m not using the custom function to shorten 1D X’s shutter lag, though, as then it’s not a constant delay – like the default of 55 milliseconds is – but can vary from between 36ms to 55ms depending on how much the aperture needs to be stepped down.

5D3’s silent mode is also quieter than 1D X’s, where the latter only offers the possibility to depress the shutter to wait for a better moment to release the mirror back up. I’ve never gotten used to this feature with 1D X, as it feels just slow and tardy. I used 5D3’s silent shutter almost constantly.

The main reason why I hesitated is that 5D3 better for shooting Project L. It has a better resolution and its features are more than enough to shoot at a slow and a steady, casual pace as Project Ls tend to go. Plus 5D3 is smaller – people don’t pay attention to it as much as they do to a bulky 1D X.

A major feature for me that makes my work that much easier and the workflow faster. Even though I always carry a paper and a pen with me and even though they’re irreplaceable as a whole, sometimes you only need a quick memo of someone’s name or similar little facts. 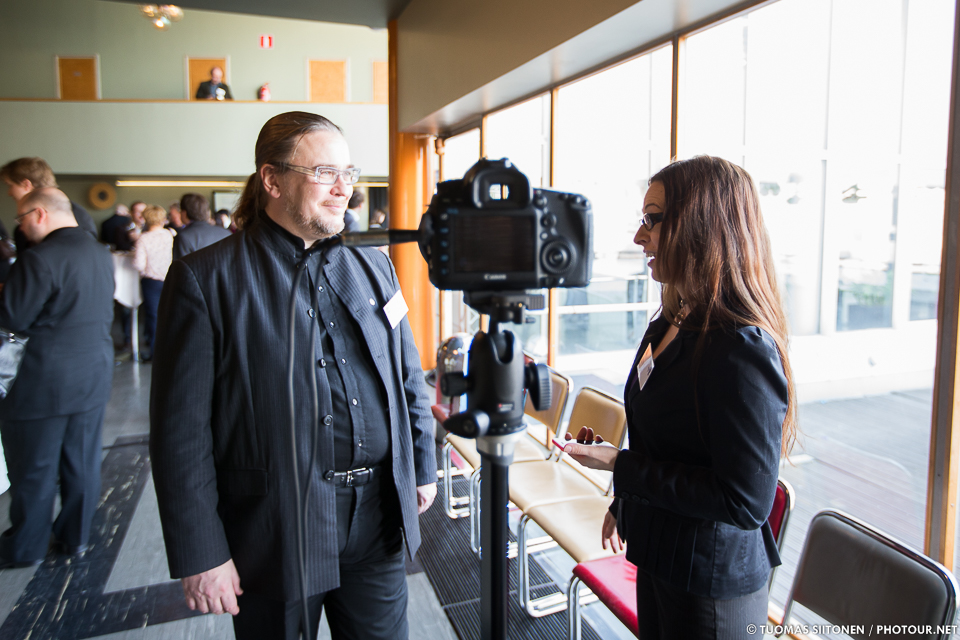 This was a difficult one, as 5D3 offers a better option than 1D X does – 5D3 has a 3.5mm plug for earphones to monitor your sound levels when shooting video. 1D X lacks this and has instead a hole for an ethernet cable, which I find somewhat conflicted, as I’ve always deemed the 5D3 to be more suitable for studios. Well okay, I haven’t had much experience with sports photography or other similar situations where photos need to be uploaded instantly, but personally, I’d prefer the 3.5mm audio output.

I’ll have to manage without listening to 1D X’s audio levels and instead trusting its automatic sound volume settings – that’s all fine for my ex-tempore video interviews.

Almost identical. 1D X is only slightly better. The minor ways 1D X is better are only marginal and can’t really be used as arguments in 1D X’s favour.

A strong argument to be made for 1D X, but to be honest, 5D3 has never let me down with a weatherproof lens. I’ve never experienced the monsoons India, merely the rainy autumns of Finland and liquid beverages getting spilled on, but never has 5D3 let me down.

Because money is expensive. I’d have both of the cameras if it would be possible – now I’ll have to just choose. And I chose 1D X.

I’ve been thinking about changing from 5D3 to 1D X since I first tried the 1D X. It just simply feels better to shoot with. 5D3 is a great camera and its image quality, build and features are probably more than enough for most professional and non-professional photographers alike. Then there are those who need 1D X for its obvious advantages, such as sports and wildlife photography. And then there are those, who need a heavy, realiable and a fast tool to obtain the possibilities to get the exact images that you want.